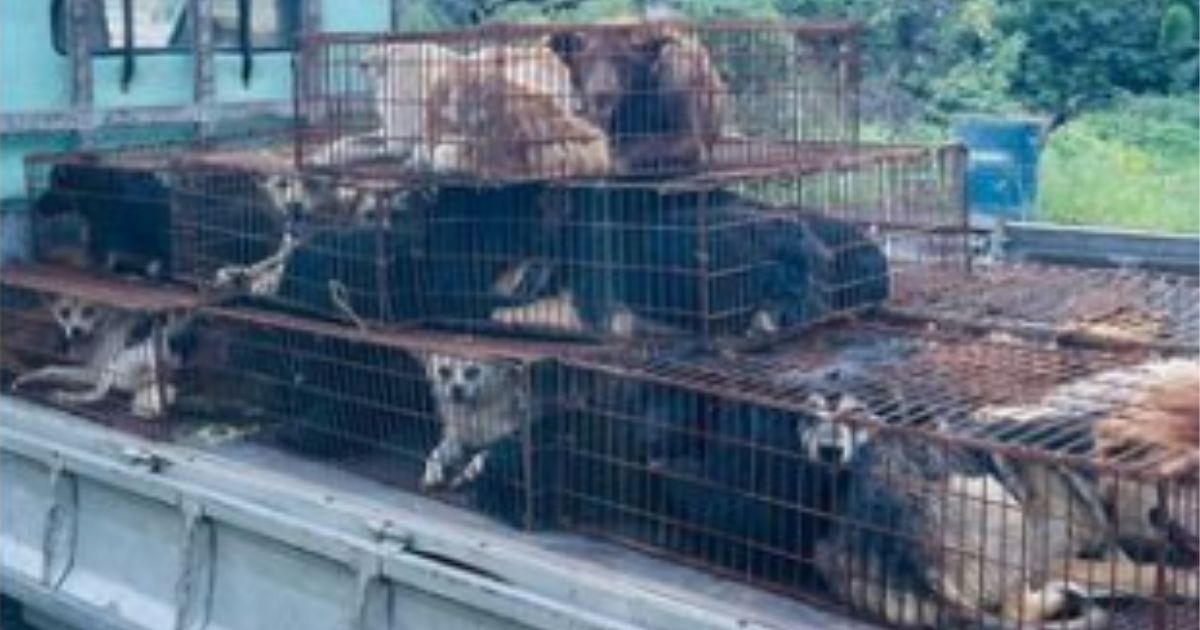 The following article, 68 Dogs Rescued After Being Crammed Into Cages on Truck, Intercepted on Way to Dog Meat Festival, was first published on Flag And Cross.

In late June, many Americans look forward to celebrating the Fourth of July. But in late June in China, a different celebration takes place: the Lychee and Dog Meat Festival in Yulin.

The festival lasts 10 days, and activists have been fighting for years to get dog meat off the menu — not just during the annual celebration, but year-round.

This year, a group of activists stopped a truck carrying several dozen dogs and got the driver to give them up, Yahoo News reported on June 21. There were 68 dogs total, crammed into rusty metal cages with no room to move, no food and no water, stressing and panting as they neared a slaughterhouse.

Liang Jia, one of the animal activists, said it was “frustrating” to watch truck after truck pass, loaded with precious canine cargo.

Sadly, many of the dogs that end up becoming part of the meat trade are stolen pets. In an effort to end that practice, Yulin’s agricultural department in May supposedly placed restrictions on the production and transportation of livestock, with heavy fines for any violations, according to the New York Post.

But the activists weren’t seeing any activity from authorities. So, tired of waiting for them to step in, rescuers took matters into their own hands.

“We flagged it down and convinced the truck driver to hand over the dogs because they were clearly stolen pets for whom he didn’t have the legally required paperwork,” Jia told Yahoo News.

“The dogs offered us their paw just like a pet at home, and they had healthy teeth, which means someone was looking after them before they were stolen.

“The Yulin authorities have a responsibility to protect public health, even if they don’t also care about the animals like we do. These poor dogs look sick, and thankfully now they will receive veterinary care, but who knows what diseases they could carry that would end up in the food market.”

The dogs were moved to more spacious cages and offered water while they waited for a veterinarian to assess them. They will be cared for by the Humane Society International (HSI).

“In China, HSI is supporting numerous local animal welfare organizations in addressing the dog meat trade within their own country,” the organization says on its website. “Since August 2014, our partner groups have assisted the rescue of more than 7,000 dogs across China from large transport vehicles carrying hundreds of captured dogs in crowded cages to their deaths at slaughterhouses.

“Together with our partner groups Vshine and CAWA, we support two shelters in Dalian and Beijing where animal victims of the dog and cat meat trade can receive veterinary treatment and care,” HSI said in a comment on its Facebook page on May 14.

A policy specialist for HSI, Peter Li, celebrated the immediate victory but mourned the unnecessary and long-term loss of life that would continue.

“Thankfully these 68 dogs are now safe after what must have been a terrifying ordeal, but for thousands more dogs in Yulin and millions across the country, the cruelty continues,” Li told Yahoo News.

He also said that most Chinese people don’t eat dogs, noting that activists such as Jia are typical of the country’s younger generation, which is opposed to eating dogs and cats.

“The truth is that most Chinese people, including those in Yulin, don’t eat dogs,” he said. “The suffering of these animals in Yulin is of course a tragedy, but we need to be calling for an end to this brutal trade every day across China, not just a few days in June in one city.

“Through dog theft, illegal trans-provincial transport and inhumane slaughter, the trade not only subjects animals to suffering but also risks public health with the potential for the spread of rabies and other diseases.

“These are compelling reasons for the Chinese authorities to end this trade once and for all.”

Continue reading: 68 Dogs Rescued After Being Crammed Into Cages on Truck, Intercepted on Way to Dog Meat Festival ...

Although I love dogs, why worry about them when people in China are not being treated much better. It is suprising that they don’t have human meat festival, or do they?