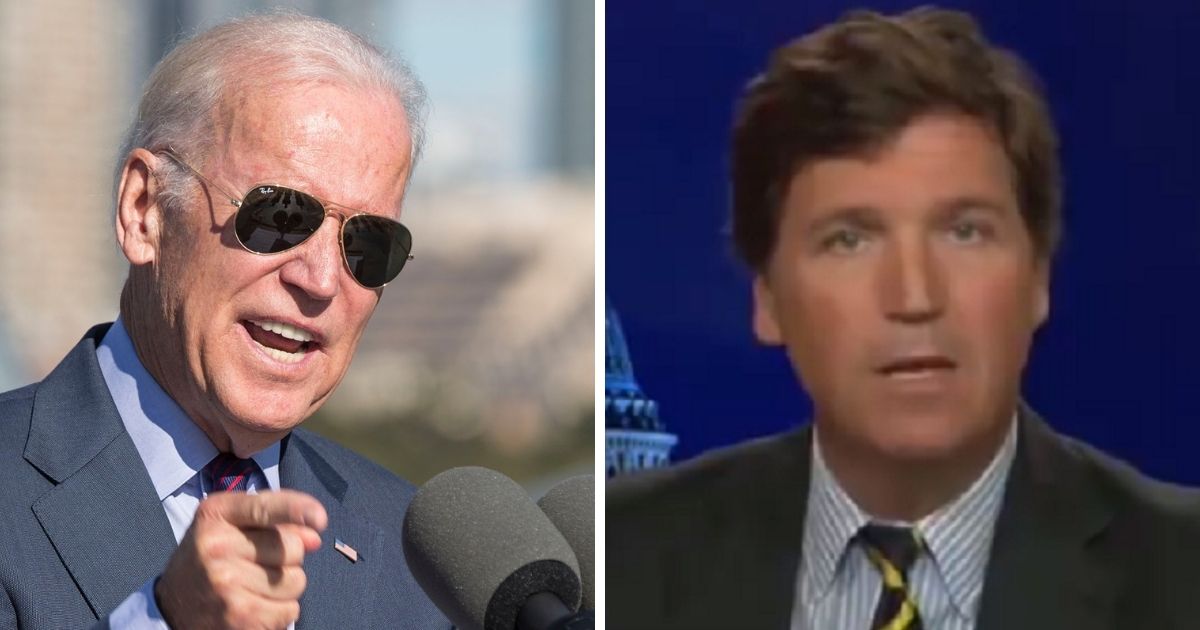 Fox News host Tucker Carlson on Monday used his widely watched program to announce that he has been shown proof that President Joe Biden’s intelligence community is monitoring his communications with the aim of getting him taken off the air.

The “Tucker Carlson Tonight” host attributed the information he shared to a whistleblower, who he said had alerted him that the National Security Agency is targeting him by monitoring his emails and text messages.

Carlson said that the whistleblower contacted him “to warn us that the NSA, the National Security Agency, is monitoring our electronic communications and is planning to leak them in an attempt to take this show off the air.”

“Now, that’s a shocking claim, and ordinarily we’d be skeptical of it,” he said, noting that such actions are illegal.

“The whistleblower, who is in a position to know, repeated back to us information about a story that we are working on that could have only come directly from my texts and emails,” he also said. “There’s no other possible source for that information, period.”

Carlson added that “the NSA captured that information without our knowledge and did it for political reasons,” and also noted that “spying on opposition journalists is incompatible with democracy.”

Tucker Carlson says a whistleblower told him that he is being spied on by the NSA and that he filed a FOIA request for information:

“The Biden administration is spying on us. We have confirmed that.” pic.twitter.com/LY2vmDLFTK

Carlson told viewers his show has filed a Freedom of Information Act request in order to get to the bottom of the matter. As Carlson noted, if the spying is occurring, he won’t likely receive any answers. Perhaps he will share more with us about what he knows in the coming days and weeks regarding what information he was shown.

But it wouldn’t at all be surprising to see the country’s intelligence community weaponized against an American citizen — especially one as high profile as Carlson.

Carlson poses a threat to the far left’s nearly unopposed takeover of everything, so it would be less than shocking to find that the aim of an intelligence agency campaign to monitor the Fox host would be to damage him.

In a matter of months, the Biden administration and its allies have seized control of seemingly every aspect of our country’s institutions, and is running the federal government as if it were a third term of President Barack Obama on steroids. Obama, of course, normalized spying on reporters.

As The Associated Press stunningly admitted in a 2018 fact check of Obama’s criticism of then-President Donald Trump’s treatment of activist reporters, the country’s 44th president was notorious for spying on his perceived opponents, especially those in the media.

“The Obama administration used the 1917 Espionage Act with unprecedented vigor, prosecuting more people under that law for leaking sensitive information to the public than all previous administrations combined,” the AP noted. “Obama’s Justice Department dug into confidential communications between news organizations and their sources as part of that effort.”

The wire service added that “Obama’s Justice Department also secretly dogged Fox News journalist James Rosen, getting his phone records, tracking his arrivals and departures at the State Department through his security-badge use, obtaining a search warrant to see his personal emails and naming him as a possible criminal conspirator in the investigation of a news leak.”

Naturally, despite a few sour faces in the establishment media, Obama was and is revered by mainstream reporters while Trump was and is portrayed as a threat to their survival. Enter Biden in January, whose administration on day one vowed to bring back “truth” and “transparency” for a free press said to have been victimized by four years of Trump.

Respecting a free press apparently means sending the dogs after political opponents such as Carlson.

Glenn Greenwald, a liberal journalist who spent years being welcomed by the establishment media, and who also knows about the power of unchecked government agencies, recently put things into perspective in a Twitter post after Trump was accused of monitoring reporters.

“The Obama DOJ pioneered the obtaining of reporters’ phone records to find sources,” he wrote in response to a journalist with a history of writing for liberal publications. “The Trump DOJ continued it. The Biden DOJ not only defended it but imposed a gag order on the NYT and CNN about it. You’re only interested if it’s a Trump story, but it’s not,” he wrote.

The Obama DOJ pioneered the obtaining of reporters’ phone records to find sources. The Trump DOJ continued it. The Biden DOJ not only defended it but imposed a gag order on the NYT and CNN about it. You’re only interested if it’s a Trump story, but it’s not.

Greenwald is best known for his role in publicizing NSA whistleblower Edward Snowden’s explosive claims that the agency he did contract work for was, without warrants, spying on Americans. Greenwald has never shown himself to be not credible.

It’s difficult to argue that Carlson, with a top-rated, influential television program, is in any way less credible than Biden or the people he’s given a green light to run the federal government.

In short, we have no reason to believe that an intelligence community weaponized by Biden is not seeking to take out perhaps its most vocal opponent — Carlson.

Of course, if the NSA or other agencies are using their power to illegally track Carlson, it leads to questions about whom else might they be targeting.

Don’t look for the establishment media to suddenly begin asking that question.

Surprise, surprise. The dems in power using the government agencies against their conservative opposition.