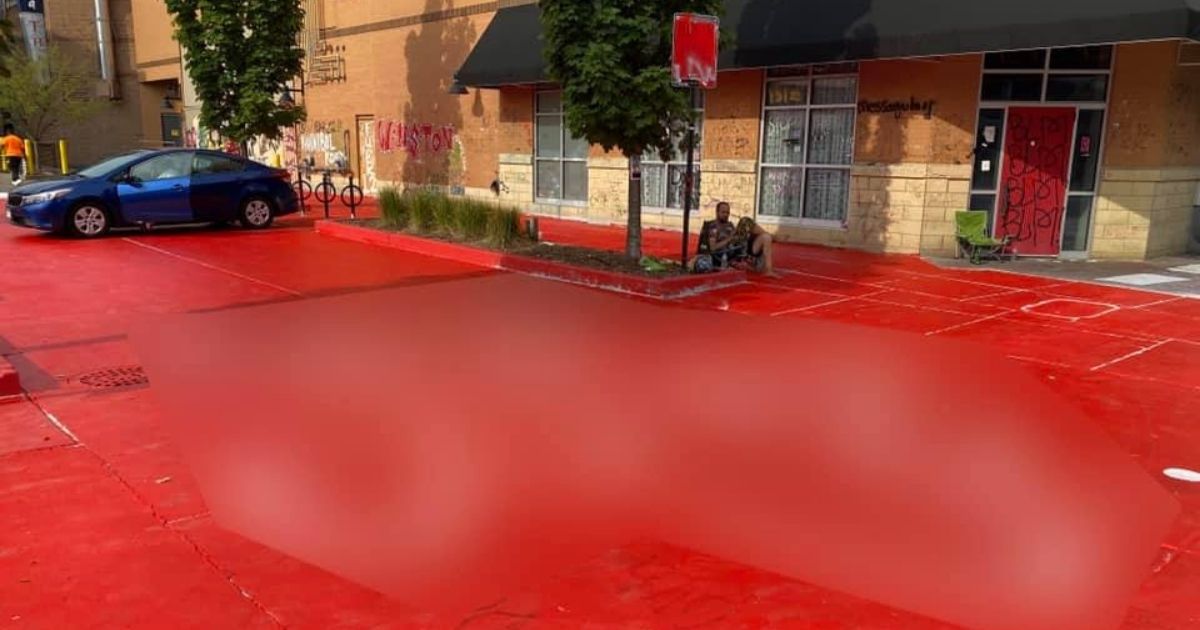 Thanks to left-wing politicians in Democrat-run Minneapolis, city employees are like the mythical figure Sisyphus, who was condemned to push a heavy boulder up a mountain, only for it to roll back down just as it approached the top.

Sisyphus was doomed to repeat this torturous, monotonous task for eternity as punishment from vindictive pagan gods. Similarly, Minneapolis city employees are being forced to clean up Black Lives Matter graffiti night after night in the latest iteration of the left’s tiresome abuse of taxpayer money.

Last week, however, City Council President Lisa Bender intervened to stop municipal workers from cleaning graffiti off the streets, according to The Minnesota Sun.

Bender was responding to a Twitter tattletale who had demanded to know why the street — which had been painted a red hue, like a river of blood, apparently as part of the ongoing BLM protests in the city — was being scrubbed on Wednesday.

Two city of minneapolis trucks are at Winston Smith’s memorial painting over everything.

The city can’t hide anymore and claim it wasn’t them.

He need not have worried. The clean-up didn’t last long because the area was repainted red the next day.

For the record, most people don’t want their streets to be vandalized because it’s aesthetically displeasing.

BLM activists had vandalized several Minneapolis streets to memorialize Winston Smith, a black man who died on June 3 after exchanging gunfire with police. Smith reportedly shot first at the police, who then returned fire.

Like career criminal George Floyd, whose May 2020 death in Minneapolis police custody sparked protests and riots across the country, Smith had a history of breaking the law, including pleading guilty in 2018 to first-degree aggravated robbery for attacking his ex-girlfriend.

After city employees went to scrub the graffiti off the streets, Bender demonized them on Twitter by jumping to conclusions and blaming local business owners for the cleanup.

In a tweet Wednesday, the council president falsely claimed the city’s cleanup crew was “talked into this by the business association.”

Essentially, she attributed malicious motives to local businesses by accusing them of browbeating gullible city employees into scrubbing the anti-police graffiti off public streets.

Update from Public Works: According to PW leadership crews went out to do cleaning & repair in the public right of way and mistook the drive aisle for a public space. There wasn’t a request from the owner or business association as I was previously told.

The next day, Bender posted an update, clarifying that the local business association had nothing to do with the city employees’ actions.

“According to [Public Works] leadership, crews went out to do cleaning & repair in the public right of way and mistook the drive aisle for a public space,” she tweeted. “There wasn’t a request from the owner or business association as I was previously told.”

One city resident tweeted a photo of some of the street graffiti, which demonized the police as “Killer Kopz” and “Tenured Terrorists” and invoked the acronym “KKK” to suggest that cops are racists who are hunting down innocent black men.

“Did you commission this Lisa Bender?” the woman asked.

Did you commission this Lisa Bender? pic.twitter.com/hTMMHRTNBv

The left’s fetishization and lionization of violent convicted felons have spawned police pullbacks and the accompanying catastrophic crime waves in Democrat-run cities.

All of this is having a dangerous collateral impact on everyday Americans, many of whom no longer feel safe walking the streets of their own neighborhoods.

Instead of working to protect anti-police graffiti, Democrats should listen to their constituents, who are fed up with rampant crime, sky-high inflation, soaring gas and consumer goods prices and a sinking feeling that the country is imploding.