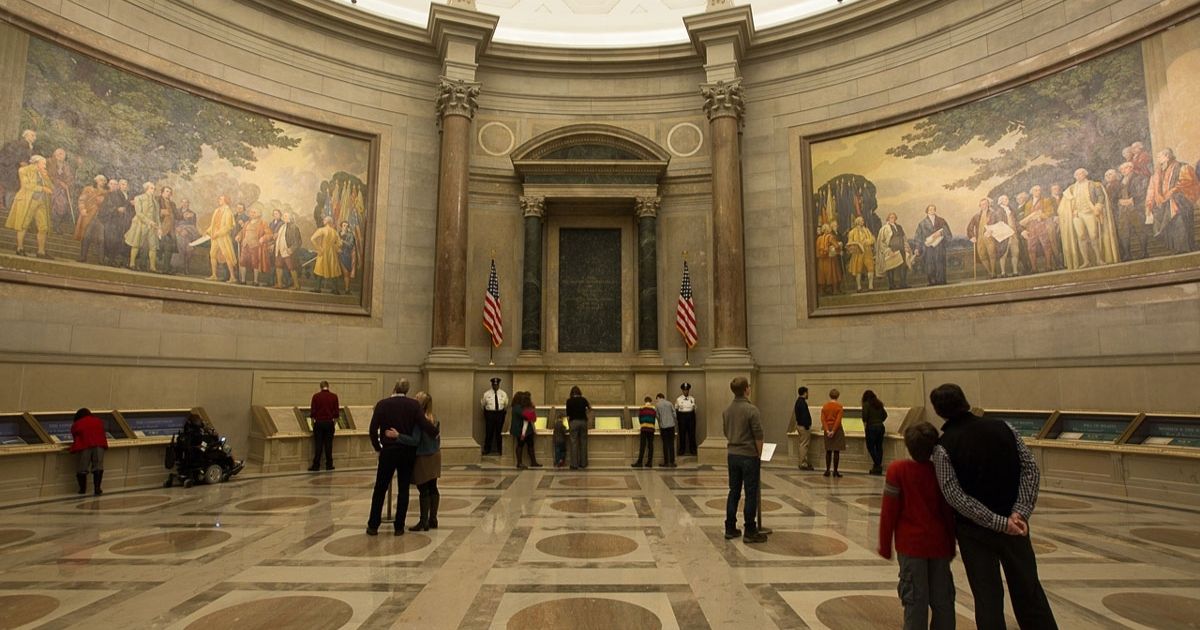 The following article, National Archives' Racism Task Force Declares Its Own Rotunda as Example of 'Structural Racism', was first published on Flag And Cross.

If you were a kid who went on a field trip to Washington, D.C., you probably remember the National Archives’ Rotunda. It’s where the three key founding documents of the United States — the Declaration of Independence, the Constitution and the Bill of Rights — are housed.

Guess what? You were apparently visiting a structure that housed “structural racism.” Who knew?

That’s not coming from an academic or racism-hustling pundit given to these sorts of headline-generating utterances like Robin DiAngelo or Michael Eric Dyson. Instead, it’s from the National Archives’ own librarian — and it generated almost no headlines when it was dropped in a report released earlier this month.

Fox News first reported on the task force document on Sunday. The report, completed in April, stated structural racism “unequivocally impacts” how the National Archives and Records Administration goes about its business. That includes interacting with the government and historical records it’s tasked with preserving, the people who visit and use the government agency, and even one another.

The report was commissioned by National Archivist David Ferriero, a Barack Obama appointee, in the wake of George Floyd’s death last year in police custody in Minneapolis. Its conclusions likely aren’t what you’d remember from that field trip:

The Founding Fathers? That group of old, white men is too positively portrayed — as are other white men of historical import.

For instance, take OurDocuments.gov, the website that deals with those “milestone documents” housed in the Rotunda. The website apparently speaks too highly of the men who founded the United States.

“For example, a search of Thomas Jefferson in OurDocuments.gov brings up 24 results. He is described in this sample lesson plan as a ‘visionary’ who took ‘vigorous action’ to strengthen the ‘will of the nation to expand westward.

“The plan does not mention that his policy of westward expansion forced Native Americans off their ancestral land, encouraged ongoing colonial violence, and laid the groundwork for further atrocities like the Trail of Tears.”

Expect a different take on Jefferson to come to OurDocuments.gov and other areas of National Archives purview soon. Also coming soon, if the task force gets its way: “Trigger warnings” on historical content to “forewarn audiences of content that may cause intense physiological and psychological symptoms for people with Post-Traumatic Stress Disorder (PTSD) and other anxiety disorders.”

“Providing an advisory notice to users gives us an opportunity to mitigate harm and contextualize the records,” the report explains in its “Recommendations” section.

“It creates a space to share with the public our ultimate goals for reparative description, demonstrate our commitment to the process, and address any barriers that we may face in achieving these goals (i.e., the size and scope of the Catalog and the ever-evolving knowledge we gain regarding what is harmful).”

Other examples of “structural racism” included “legacy descriptions that use racial slurs and harmful language to describe BIPOC [Black, Indigenous and other People of Color] communities.” Fox News reported that, yes, actual slurs were included. Other offensive “legacy descriptions,” however, included words like “elderly,” “handicapped” and “illegal alien.”

As for that rotunda, the paintings and displays overemphasize “wealthy White men in the nation’s founding while marginalizing BIPOC, women, and other communities.”

Changing the Rotunda might be difficult to do, given the frescoes aren’t exactly something that can easily be moved and the displays deal with those “structurally racist” documents like the Declaration, Constitution and Bill of Rights.

So, when the National Archives task force wants to “reimagine the Rotunda,” as it recommends doing in the report, how would it go about it? According to the report, one way to get there would be to stage “dance or performance art in the space that invites dialogue about the ways that the United States has mythologized the founding era.” I append no comment.

Once again, American history is being denigrated by woke leftists. We will not stand for this. Are the leftists trying to destroy this country?https://t.co/RW8N3O9JxK

In an email to Fox News, Cassie Smedile — executive director of America Rising, a conservative group — called the report “the radical Left’s latest attempt to sow division and rewrite our history.”

“With Democrats controlling every lever of our government, these efforts have only become more flagrant and pervasive. No institution, agency or classroom is off limits,” Smedile wrote, according to Fox. “The American people deserve to be made fully aware of the radical Left’s schemes, and we’ll continue to expose them.”

That’s all well and good, but what do you think the likelihood is that this stops the National Archives from implementing the task force’s recommendations?

And how much of those recommendations will be used to push a leftist agenda in the present, rather than focusing on the past? When the task force says the National Archives has “a responsibility to eliminate racist language in archival descriptions and revise the policies and practices that led to it,” do you think NARA employees will spend more time fighting conservative pushback or scouring the archives for any errant use of the grave ageist slur “elderly?”

The foundation for this house of inanities was laid long ago in academia and newsrooms across America. It may have taken George Floyd’s death to unleash a sea change of these proportions in such a short time, but that was just a catalyst for a long game the far left has been playing for years — and now President Joe Biden’s administration has given it a safe space.

These are the battles conservatives are losing because, not too long ago. we thought this was mere prattle confined to college campuses environs, which, when exposed to the real world, would wither and die. Instead, this has become our real world — and it’s conservatives, patriots and their values that are expected to shrivel away and perish when exposed to a landscape of homogenized wokeness.

Whether or not that happens depends on how thoroughly we understand the urgency of the moment. This report isn’t just a silly farrago of stilted Newspeak from a powerless committee of left-wing apparatchiks. These are the unelected bureaucrats in charge of curating our cultural heritage — including the Declaration of Independence, the Constitution, the Bill of Rights and our Founding Fathers.

“Trigger warnings” on historical documents and a campaign to “reimagine the Rotunda” by staging “dance or performance art in the space that invites dialogue about the ways that the United States has mythologized the founding era” may seem hilarious on their face.

But there’s nothing funny about the intentions that lurk behind language like that.