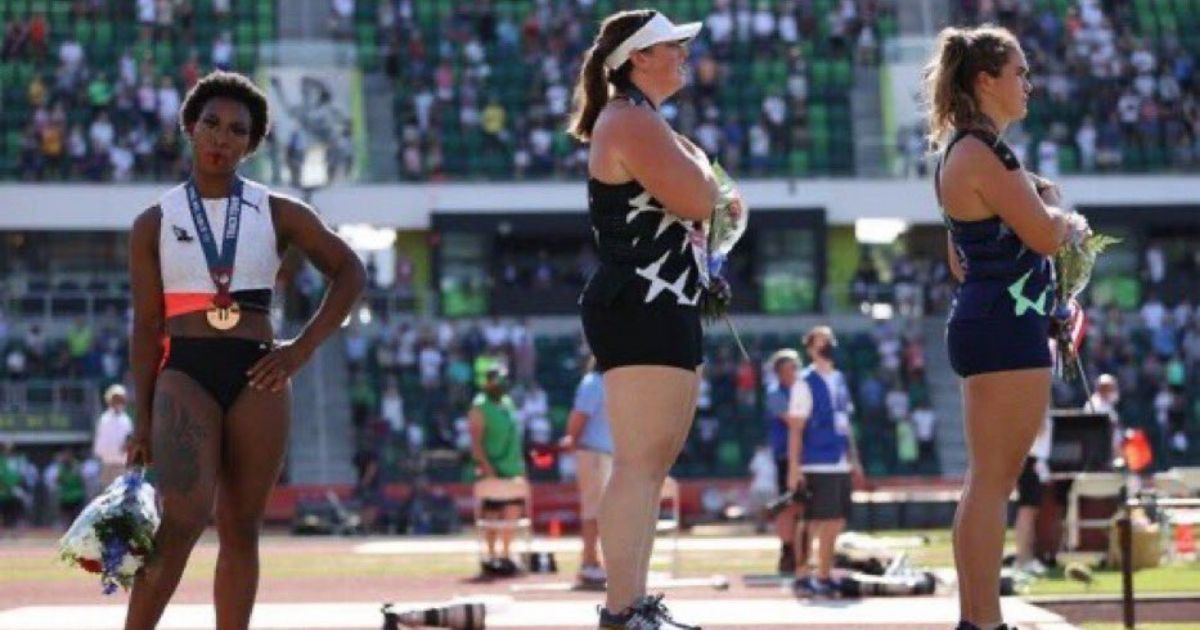 The following article, Disgraceful: US Olympian Turns Her Back on Flag While Anthem Plays, Accuses Organizers of 'Setup', was first published on Flag And Cross.

U.S. Olympian Gwendolyn Berry’s contempt for the country she will have the honor to represent at the Tokyo Olympics next month was on full display on Saturday evening.

After she finished third in the hammer throwing event at the U.S. Olympic track and field trials in Eugene, Oregon, which guaranteed her a spot on Team USA, the top three finishers stood on the medal podium. “The Star-Bangled Banner” was played as winner DeAnna Price, second-place finisher Brooke Andersen and Berry waited to receive their medals.

As if it were kryptonite, Berry turned her back to the American flag, according to the New York Post. In case anyone missed her message, she held up a shirt that said “Activist Athlete.”

“Arrogant Athlete” would have been more accurate.

It turned out that Berry believed they played the national anthem just to spite her. Please get over yourself, Gwen.

Following the award ceremony, she told reporters, “I feel like it was a set-up, and they did it on purpose. I was pissed, to be honest.”

“They had enough opportunities to play the national anthem before we got up there,” Berry said. “I was thinking about what I should do. Eventually I stayed there and I swayed, I put my shirt over my head. It was real disrespectful.”

“I didn’t really want to be up there,” the 31-year-old Olympian added. “Like I said, it was a setup. I was hot, I was ready to take my pictures and get into some shade.”

She didn’t really want to be up there?

“They said they were going to play it before we walked out, then they played it when we were out there,” Berry said. “But I don’t really want to talk about the anthem because that’s not important. The anthem doesn’t speak for me. It never has.”

She’s a hammer thrower who won a bronze medal at an Olympic trial, for goodness sake.

USA Today contacted USA Track and Field to find out if it had played the anthem to “set up” Berry.

The organization’s managing director of communications, Susan Hazzard, replied by email: “The national anthem was scheduled to play at 5:20 p.m. today.”

Hazzard continued: “We didn’t wait until the athletes were on the podium for the hammer throw awards, the national anthem is played every day according to a previously published schedule. We’re thrilled with the women’s hammer throw team that selected themselves for the Games.”

What is wrong with people?

The International Olympic Committee “prohibits protests and demonstrations on the field of play,” according to USA Today. However, the U.S. Olympic and Paralympic Committee recently changed its rules and now allows protests at the Olympic trials.

This was not Berry’s first protest. She raised her fist while the national anthem was being played at the Pan American Games in Lima, Peru, in August 2019, and was put on probation.

In June 2020, Berry said USOPC CEO Sarah Hirshland apologized to her “for not understanding the severity of the impact her decisions had on me,” according to NBC News.

“I am grateful to Gwen for her time and her honesty last night,” Hirshland said in a statement. “I heard her. I apologized for how my decisions made her feel and also did my best to explain why I made them.

“Gwen has a powerful voice in this national conversation, and I am sure that together we can use the platform of Olympic and Paralympic sport to address and fight against systematic inequality and racism in our country.”

We’re going to see more of this. It’s going to make patriotic Americans cheer for foreign competitors and against the anti-American Americans.

Hammer thrower Gwen Berry turns away from flag while anthem plays at trials – ‘I feel like it was a set-up’ https://t.co/TnIFwzy5Fh

If Gwendolyn Berry hates America so much, why doesn’t she leave? What country wouldn’t welcome a gifted hammer thrower? It’s such an important skill, after all.

Because she knows she would quickly find out what real racism looks like. She also knows there’s no country in the world where black people have more freedom, privilege or opportunities than in America.

Berry would do well to remember that fans don’t watch sporting events because they care about the athlete’s political beliefs.

Continue reading: Disgraceful: US Olympian Turns Her Back on Flag While Anthem Plays, Accuses Organizers of 'Setup' ...

Gwen Berry is a total disgrace and should go and represent another country. Her unpatriotic attitude and BS about racism is so disingenuous. Where else could she have had the FREEDOM to pursue her sport? She should go to another country and see what racism really is.

She was set up by the leftists. She thought she should have had 1st place because of her skin color and no other reason. She got beat and is blaming everything else. Her “purpose” should lead her off the field into Portland to serve her “purpose”. What a loser all the way around. She should not be allowed to participate in the US team. Maybe join the Chinese, Iranian, Russian, N. Korean or Antarctica teams.

She should thank God she was born in America. A nation that gave her a chance to be the best she could be and reap all the benefits of being a US citizen. She could have been born in one of the many 3rd world Hellholes with no future and no hope.
Shame on her and others like her who do not want to realize how good they really have it here.

This sick twit is representing the United States in the Olympics. If she doesn’t like the flag, doesn’t like our country, she should be disqualified from being a U.S. Olympic contender. I’m quite certain whoever placed fourth would love to take her place. The U.S. Olympic Committee should be informed by the U.S. government that Berry is not acceptable and must be removed.

Let her throw the hammer (and sickle) for Russia or China – if they would even take her.
If Obama had a daughter (an actual biological daughter), she would look like Berry.

So, it was ALL about you miss ignorant. you made the TEAM by the skin of your teeth with your third place. Get over yourself: Or better still just go away. I hear Africa has room for ignorant third placers

Isn’t it interesting, that it’s always a nigger showing disrespect.

I just wonder who this spineless Hirschland woman was who was kissing her ass over this.