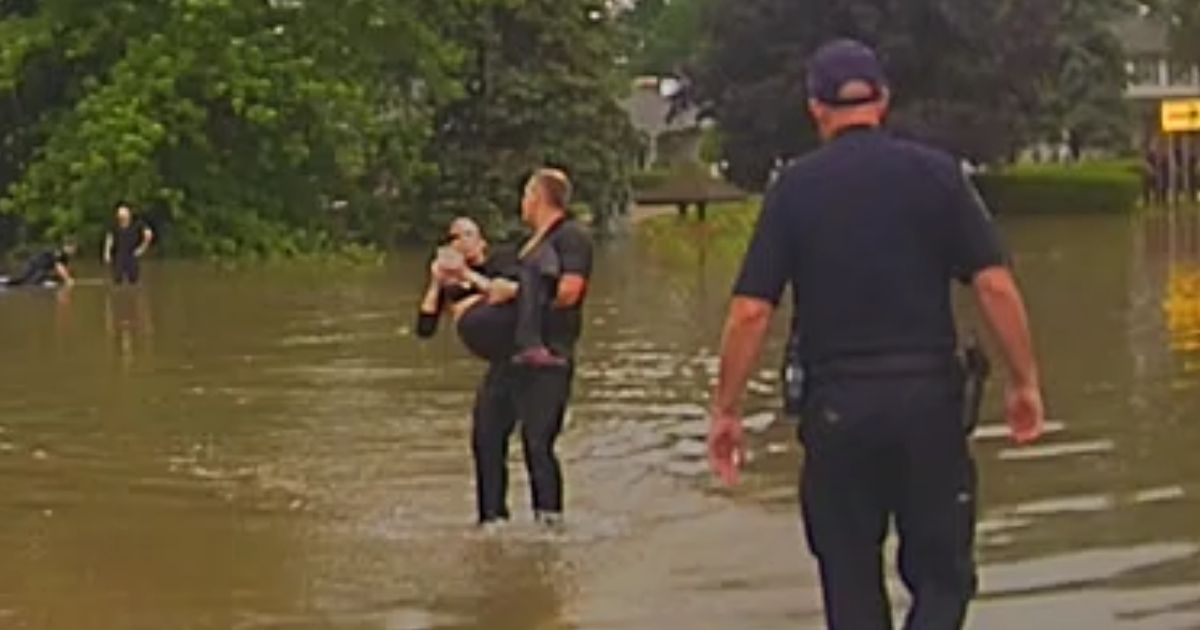 The following article, 3 Hero Officers Swim Through Floodwaters to Rescue 82-Year-Old Woman Trapped in Sinking Car, was first published on Flag And Cross.

On Friday and into Saturday, Clinton Township in Michigan was swept with several inches of rainfall, making travel dangerous as roadways were flooded.

At around 8 a.m. Saturday morning, one elderly woman found herself in a very tricky situation when floodwaters swept her car off Millar Road.

If the first responders hadn’t responded when they did, the 82-year-old woman likely would not have made it, as her car was “almost completely submerged” when they got there, police said.

“An 82 year old woman from Leonard was stranded in her vehicle after it was swept from Millar Road by flood waters. Officers arrived to find the vehicle almost completely submerged and still sinking in the rising water.

“After removing their duty gear, three officers swam to her vehicle and were able to pull her to safety before the vehicle became completely submerged. The woman was conscious and alert, but transported to an area hospital for observation.

“As a reminder, NEVER drive over standing water in the roadway. The depth and current of the water is not always apparent. A vehicle can be swept away in as little as 6” of water.”

Photos show just how dire the situation was, with an officer carrying the elderly woman out of the water that almost claimed her.

Hundreds of people commented on the post to thank the officers for their service — and a few self-identified relatives of the woman were very grateful as well.

“Thank you Clinton Township Police Department!” Susan Byrd commented. “That was my mom. Words cannot express how grateful we are.”

“This is my aunt and [I’m] so very thankful she is safe,” Sarah Vanden Bossche wrote.

Some locals suggested that permanent signs regarding flooding be posted at that particular low spot the woman encountered.

Others commented to say people were still attempting to drive through the flooded area, but based on one photo another commenter shared, the road was closed that evening, hopefully preventing any more similar emergencies.

Way to go, officers. Back the blue.