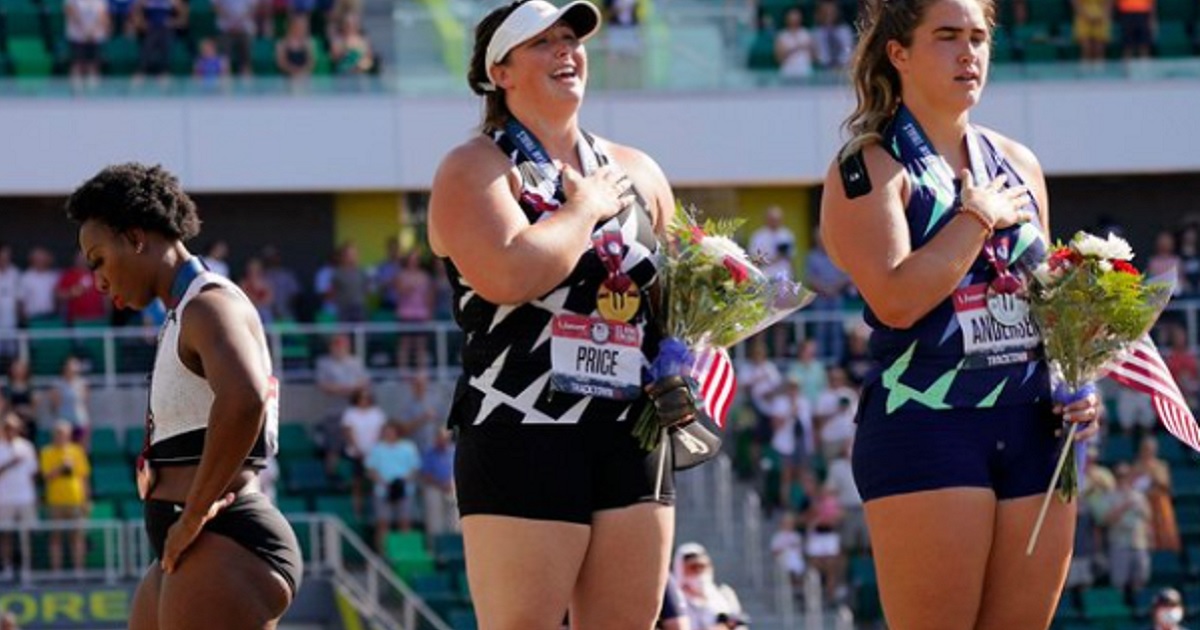 The following article, Olympics-Bound Athlete Protests US Flag and Anthem, Claims It Was Part of a 'Set Up' Targeting Her, was first published on Flag And Cross.

A U.S. athlete who in the past showed her disdain for the national anthem reacted to hearing the “Star-Spangled Banner” Saturday by taking posturing in protest to a new extreme.

Gwen Berry had placed third in the hammer throw during the U.S. Olympic trials in Eugene Oregon, and was getting her bronze medal when the anthem began playing.

Berry said she knew what was coming before her podium performance.

“It was funny because they said they were going to play it before we walked out,” Berry told the Post. “It just happened they played it when we were out there. So, you know, it’s OK. I really don’t want to talk about the anthem because that’s not important. The anthem don’t speak for me. It never has.”

USA Track and Field spokeswoman Susan Hazzard said the timing was a coincidence.

It was unclear exactly what happened Saturday. The anthem actually played at 5:25 p.m., according to the AP.

But it was clear that Berry’s act did not win rave reviews on Twitter.

I told you there would be more garbage behavior like this. #GwenBerry needs to learn that it’s not about the anthem “speaking for her, “ it’s about a moment of gratitude for this country that makes her Olympic dream possible. Shameful self-absorption. https://t.co/MwsIp7Jpba

What is wrong with people?

We’re going to see more of this. It’s going to make patriotic Americans cheer for foreign competitors and against the anti-American Americans.

Hammer thrower Gwen Berry turns away from flag while anthem plays at trials – ‘I feel like it was a set-up’ https://t.co/TnIFwzy5Fh

Berry has protested the anthem before. In 2019, after winning a gold medal at the Pan Am Games, she raised her fist in protest.

This time, she claimed, she just reacted as best she could.

“It really wasn’t a message,” Berry told the Post. “I didn’t want to be up there. I felt like it was a setup. I was hot. I was ready to get my pictures and get to some shade.”

While Olympic qualifiers DeAnna Price and Brooke Andersen looked at the flag with their hands on their hearts, Berry turned away and eventually covered her head with black T-shirt reading “Activist Athlete.”

Berry won’t tip her hand as to what she plans if she wins a medal at the Tokyo Olympics next mont — so American track and field fans can only wait to see if and how their country is insulted by one of its own athletes during the medals presentations.

“When I get there, I’ll figure out something to do,” she told the Post.

Berry believes she has an inalienable right to publicly protest against the nation she represents, and bristles when Olympics officials talk about regulating protests.

“It’s our sacrifice. It’s our podium. It’s our moment. So we should be able to protest whatever we want. It’s not for them to decide,” she told the Post.

“Sports is entertainment. But my purpose and my voice and mission is bigger than the sport,” she said, according to the Post.

Continue reading: Olympics-Bound Athlete Protests US Flag and Anthem, Claims It Was Part of a 'Set Up' Targeting Her ...

Need to be removed form the team, you are a representative of this country.