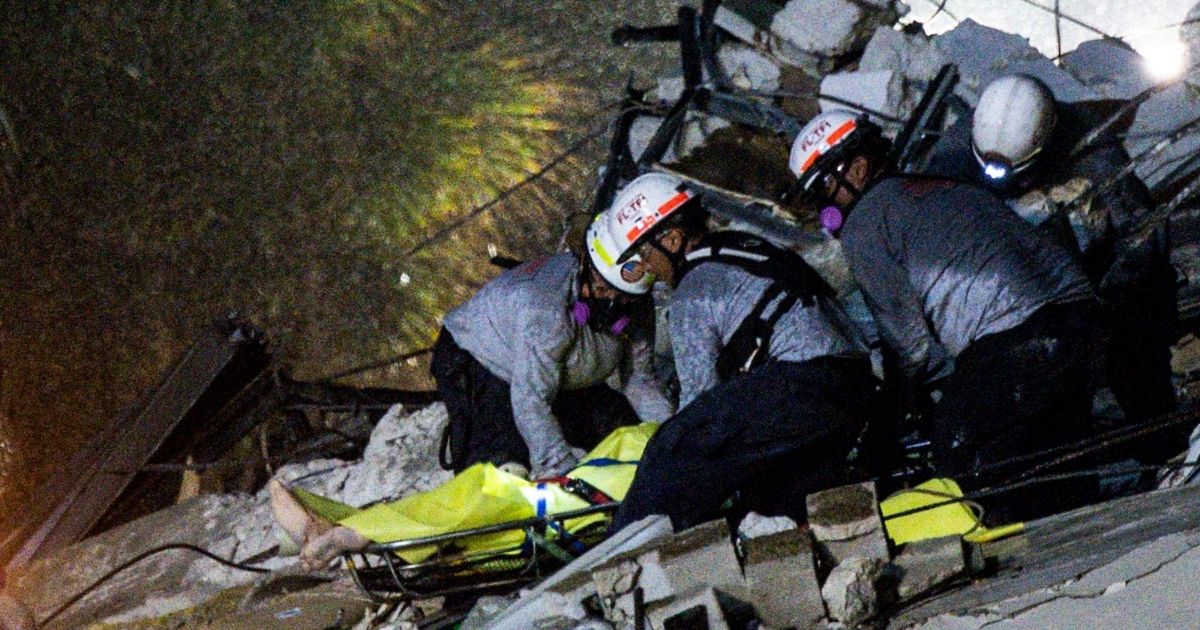 The following article, Horrified FL Condo Resident Saw Cracks Form in Her Apartment, Heard a Fearsome Noise: 'It Was Infernal', was first published on Flag And Cross.

Personal accounts are just starting to emerge of the tragedy that unfolded Thursday morning after the partial collapse of the Champlain Towers South Condominium building in Surfside, Florida.

One survivor, Iliana Monteagudo, who is in her 50s, recounted to the New York Post the terrifying moments after she was awoken about 1:30 a.m. by “strange noises.”

She told the Post she thought the sounds had come from an “open sliding door to the oceanfront balcony.”

“I ran and tried to close it, but I couldn’t. I imagine because it was unlevel already because of all the movement,” she explained. “I heard a crack and when I looked, I saw a crack traveling in the wall two fingers thick. Something told me, ‘you need to run.’”

Monteagudo, whose unit was on the building’s sixth floor, said that if she had stayed even one more minute, she may not have survived.

“Two more minutes, no, no. Not even one. There was no more time,” she said.

Monteagudo described her escape: “When I was running down the stairs I went from six, to five and then four, I heard a tremendous noise. It was infernal. The building was falling. I don’t know how I managed to escape.”

Outside, it was pitch black. She recalled seeing smoke and water all around her and began to pray.

“God help me, I want to see my children. God please help me, don’t let me die like this,” she said.

“The security ran out screaming there was an earthquake, we need to go.”

They helped her to safety.

“I lost everything now. I have nothing,” she said. “But I have my life and that’s all that matters. With life, there is hope. We can start again.

“I just pray for all the others that might be trapped.”

Monteagudo told the Post she had bought her unit in December, and only learned about the building’s structural issues afterward.

“They never told us anything. Then they suddenly make us make an extra $1,000 special assessment for all these repairs they need to do. We are supposed to start paying in July,” she said.

Monteagudo was one of the lucky ones.

Sky News reported the story of a harrowing 1:30 a.m. phone call from another Champlain Towers resident, Cassie Stratton, 40, to her husband, Michael Stratton, 66, who was in Washington, D.C., for business. She remains unaccounted for.

Stratton’s older sister, Ashley Dean, told Sky News her sister was standing on her balcony when she made the call. Cassie Stratton reportedly said, “Honey, the pool is caving in, the pool is sinking to the ground.”

“He said ‘what are you talking about?’ And she says, ‘the ground is shaking, everything’s shaking’ and then she screamed a blood-curdling scream and the line went dead.”

Dean said, “I have to be realistic. My baby is gone. My baby sister is gone.”

She also spoke of the building’s structural issues. “My sister told me about all kinds of water leaks and people on her roof with heavy equipment. … I want to know how this could happen and who is responsible? She was living in a dream place but it was a death trap.”

According to the Sky News report, photographs of those who remain unaccounted for adorn a nearby wall. The photos include toddlers, teenagers and retirees.

Sadly, as Dean conceded, the likelihood of finding survivors trapped in the rubble grows more remote by the day.