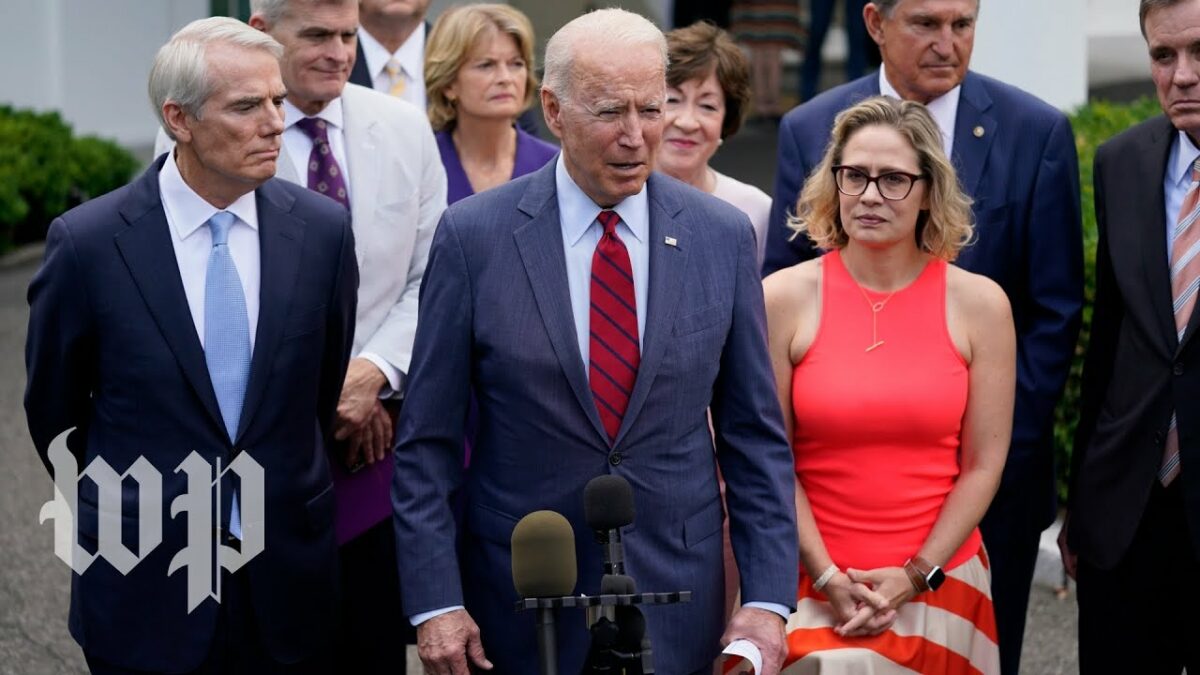 The following article, Biden Scrambles to Walk Back Blunder After Blowing Up Big Bipartisan Deal, was first published on Flag And Cross.

President Joe Biden managed to reach the first bipartisan deal of his presidency earlier this week. Hours after announcing it, he almost blew it up.

Now, he’s trying to put out the fuse he lit on the dynamite stick.

First, the events of Thursday: In the morning, Biden and a group of senators greeted reporters outside the White House to announce they’d reached an agreement on a more modest version of the president’s infrastructure plan — one that could clear the 60-vote hurdle required under the Senate filibuster and didn’t require the need to use the budget reconciliation process to pass on a party-line vote.

The bill cut the initial proposal roughly in half, from $2.3 trillion to $1.2 trillion.

“We’ve all agreed that none of us got what we all wanted,” Biden said.

“I clearly didn’t get all I wanted. They gave more than, I think, maybe they were inclined to give in the first place. But this reminds me of the days we used to get an awful lot done up in the United States Congress. We actually worked with one another.”

And then, speaking to reporters in the East Room a few hours later, Biden said he’d better get everything he wanted or he was calling this off.

“I’m getting to work with Congress right away on the other half of my economic agenda as well,” Biden said. “The American Families Plan, to finish the job on child care, education, the caring economy, clean energy and tax cuts for American families, and much more.

“For me, investment on our physical and human infrastructure are inextricably intertwined … Both need to get done. I’m going to work closely with Speaker Pelosi and Leader Schumer to make sure that both move through the legislative process promptly, and in tandem.”

If these didn’t come to him in tandem, the president indicated he wouldn’t accept the infrastructure bill.

This wasn’t just a problem in terms of generating pushback from Republicans — although, oh boy, did it ever do that. Thus, in danger of losing the bill, Biden issued a White House statement on Saturday in which he walked that veto rhetoric back.

“At a press conference after announcing the bipartisan agreement, I indicated that I would refuse to sign the infrastructure bill if it was sent to me without my Families Plan and other priorities, including clean energy,” the president said.

“That statement understandably upset some Republicans, who do not see the two plans as linked; they are hoping to defeat my Families Plan—and do not want their support for the infrastructure plan to be seen as aiding passage of the Families Plan.

“My comments also created the impression that I was issuing a veto threat on the very plan I had just agreed to, which was certainly not my intent,” he added.

If it wasn’t his intent, he did a really good job of giving that impression.

As Biden almost certainly knows — or at least almost certainly knew at one time — under Article 1, Section VII of the Constitution, a bill can become law without a presidential signature, if the president takes no action on a bill presented to him over 10 days (not counting Sundays) while Congress is in session.

Lawmakers know the rules, too.

So Biden could let a bill become law even if he disagreed with it, just by not vetoing it.

But Biden also had to know exactly how his promise not to sign the infrastructure bill would be construed on Capitol Hill and played in the mainstream media. It had all the earmarks of a veto threat — complete with a “Real simple,” just to make it sound tough.

Whether Biden’s revised statement brings wary members who signed onto the bipartisan framework back to the table is anyone’s guess, considering they were decidedly unhappy with being sold out just hours after the agreement was announced.

“There was a lot of enthusiasm on Capitol Hill from people you wouldn’t expect when we brought it to them,” Louisiana GOP Sen. Bill Cassidy told reporters, according to WAFB-TV. “Then the president said he won’t sign the bill until a reconciliation bill is passed — that turned everything upside down.”

Asked if he was “blindsided by this,” Cassidy responded, “Yes. Not what we heard in the Oval Office, speaking to White House staff and Dems about this — everyone caught off guard.”

“No deal by extortion! It was never suggested to me during these negotiations that President Biden was holding hostage the bipartisan infrastructure proposal unless a liberal reconciliation package was also passed,” he wrote in a Twitter post.

“I can’t imagine any other Republican had that impression. I can’t believe the Biden Administration expects such an obvious bait and switch tactic – motivated by fear of the Left – to work in the Senate and be respected by the American people.”

I can’t imagine any other Republican had that impression.

I can’t believe the Biden Administration expects such an obvious bait and switch tactic – motivated by fear of the Left – to work in the Senate and be respected by the American people.

It’s not just Republicans he’ll end up losing, either — what remains of the moderate wing of the Democratic Party wouldn’t be happy either.

As John McCormack noted at National Review, the bipartisan plan would eliminate much of the social welfare spending from the original $2.3 trillion infrastructure bill.

Biden’s statement that he wouldn’t sign an infrastructure bill would have to alienate moderate Democrats — in particular West Virginia Sen. Joe Manchin, who told CNN on June 16 that any bipartisan bill “should not be conditional” on any bills passed via the partisan reconciliation process, but “should be based on the merit of what the bill is.”

Biden’s remark, McCormack wrote, “turned the bipartisan bill into a hostage that would be killed if Joe Manchin and Bernie Sanders could not agree on a Democrats-only reconciliation bill to increase social spending by trillions of dollars.”

“Of course, the bipartisan bill would remain a hostage only if ten or more Senate Republicans are willing to vote for it,” McCormack wrote. “And why would ten Senate Republicans offer themselves up as willing hostages in a ploy to pressure Joe Manchin and other moderate Democrats to reach an agreement with the far Left?

And therein lies Biden’s other issue — the left flank of his party, whose members are currently furious they’re not getting the spending they want. Biden addressed them in the statement, too: “Some other Democrats have said they might oppose the Infrastructure Plan because it omits items they think are important: that is a mistake, in my view.”

That was essentially it, which probably didn’t do much to mollify the left.

Biden has had to walk stuff back before — like the time he accidentally called the border crisis a “crisis,” a big faux pas on the left. This is a bit different, inasmuch as his bluster could blow up the first major bipartisan agreement of his presidency.

Don’t expect him to learn any lessons from this, though. This is a president constantly sleepwalking into traps he should know enough to avoid, who then spends half his time writhing around, trying to pry the trap off of his foot.

How can we expect the future to be any different?