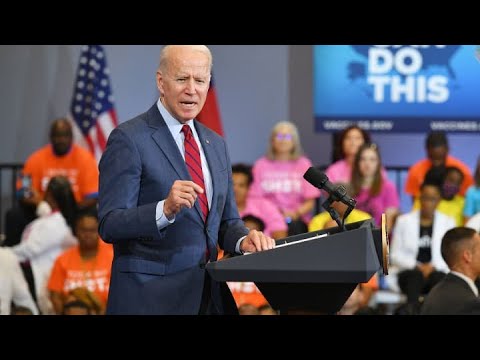 The following article, As Biden Faces Questions About His Mental Health, He Makes Up War That Never Happened, was first published on Flag And Cross.

“No one wants war,” Biden said, according to CBS News. However, Trump’s strategy was “dangerously incompetent” which could “explode geopolitics in the region.”

Thus, while we didn’t want war, it could happen “by accident.”

Joe Biden says President Donald Trump’s escalation of tensions with Iran proves him to be “dangerously incompetent” and puts the U.S. on the brink of war https://t.co/IrNHrXyMvB pic.twitter.com/HXlAT0UmeX

Maybe we all missed the war with Iran that followed, considering the COVID-19 pandemic that began to sweep the world just weeks after Biden made these remarks. Maybe it got lost in the news shuffle; after all, CNN only had 24 hours to go after the Trump administration and it’d be hard to work a conflict with Tehran into the crawl.

Or maybe Joe Biden is a man who tends to do and say a lot of things “by accident.”

Whichever it was, on Thursday, speaking in North Carolina to promote the COVID vaccination, Biden claimed we’d fought a war against Iran, despite the obvious fact we haven’t.

“That’s more than every life lost in World War I, World War II, the Vietnam War, Iraq, Iran, across the board — Afghanistan. More lives lost in a year than every major war in the 20th century and the 21st century.”

The speech came hours after a strange news conference at the White House in which he whispered at reporters and chuckled after he had to be reminded to mention the Shoreside, Florida condominium collapse. It also comes after a campaign and presidency filled with strange moments which called Biden’s mental fitness into question.

Why does President Biden randomly break out into a whisper? The man seems to be losing his mind.pic.twitter.com/attFP3iwBD

Joe Biden laughs about needing to be reminded to address the tragedy in Florida pic.twitter.com/fZr0fqzDnC

The Post raised the potential that Biden was bringing up the eight Americans that died when two helicopters collided in an attempt to rescue Americans during the Iranian hostage crisis in 1980. However, more have died in other actual invasions (19 during the 1983 invasion of Grenada and 40 in the 1989 invasion of Panama) than during the hostage rescue mission.

There’s also the potential that he meant to say Afghanistan and was merely correcting himself when he mentioned that conflict a few seconds later. Clarifications usually clarify, however — and in this case, you could just as easily say Biden forgot we had a war in Afghanistan, the same way he forgot we didn’t have a conflict with Iran.

The most likely explanation, given how often gaffery strikes Biden, is this: It was a place of conflict that came immediately to mind during a portion of his speech when he wasn’t looking directly at the teleprompter during the speech and he mentioned it.

Whatever the case, coming hours after the odd performance at the White House news conference, didn’t impress social media users.

Somebody ask Biden when we had a war with Iran. I must’ve missed it. He just included it in his list comparing resource war deaths to Covid.

Was it over when the Germans bombed Pearl Harbor? When did we have a war with Iran? https://t.co/nHX0Ss4BQx

The sad thing is, it doesn’t need damage control; the media is more than happy to pretend this problem doesn’t exist. In the meantime, as it regards Tehran, it turns out that promised war just slip under the radar during the COVID-19 pandemic. (Trust me, I googled it.)

It’s worth noting, however, that the Biden administration continues to attempt to steer the United States back into the Iran nuclear deal the Trump administration pulled us out of. That pact, negotiated under the Obama administration, did nothing to stop Tehran’s buildup of conventional weapons or its proxy wars abroad and only kicked the can down the road for a decade when it came to their ability to develop a nuclear weapon.

If you do want that war with Iran, in other words, perhaps all you need to do is wait.

Continue reading: As Biden Faces Questions About His Mental Health, He Makes Up War That Never Happened ...