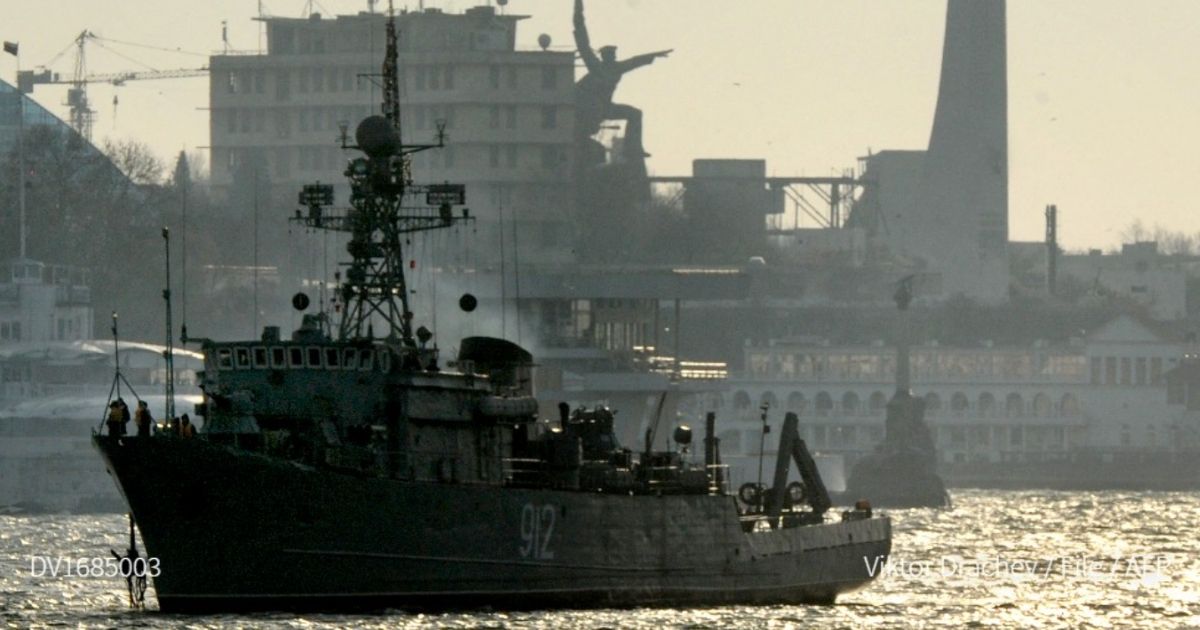 The following article, Russia Warns: Next Shots at NATO Warships Will Be 'Right on Target', was first published on Flag And Cross.

Well, as the president of the United States is whispering incoherently to reporters like a slightly disassociated nursing home resident dolling out life advice, Russia says it’s fired live ammunition on allied forces and is ready to do so again in the latest indication that Russian President Vladimir Putin is openly trying to provoke our new administration.

Russia said it fired on a British destroyer this week for sailing through waters near Crimea and is prepared to do so again should any other ships fail to heed its warnings, NBC News reported.

As far as Russia is concerned, Crimea — which the nation annexed in 2014 in an aggressive military invasion — is under Russian control and officials say they’re prepared to defend it from North Atlantic Treaty Organization forces should any of our ships encroach into Russian-controlled waters.

A clear proof of Ukraine’s position: Russia’s aggressive and provocative actions in the Black and Azov seas, its occupation & militarization of Crimea pose a lasting threat to Ukraine and allies. We need a new quality of cooperation between Ukraine & NATO allies in the Black Sea. https://t.co/VjBPxRWU3d

A Russian senior diplomat confirmed that the military fired warning shots at the British Defender warship and that a warplane dropped bombs in its path to deter it from entering Crimean waters near the city of Sevastopol.

Russian Deputy Foreign Minister Sergei Ryabkov said Thursday that “the inviolability of the Russian borders is an absolute imperative,” and that it will be defended “by all means, diplomatic, political and military, if needed,” according to NBC.

Ryabkov also cheekily quipped that the Defender might be better named the “Agressor,” warning that “those who try to test our strength are taking high risks.”

“We may drop bombs and not just in the path but right on target, if colleagues don’t get it otherwise,” the diplomat warned.

Dmitry Peskov, a spokesman for the Kremlin, characterized the Defender’s supposed actions as a “deliberate and well-prepared provocation” on the part of the United Kingdom and echoed Rybakov’s stern warning to Western allies.

This marks the first time that Russia has acknowledged having fired on a NATO warship since the Cold War era, NBC noted, as rising tensions between our eastern adversary and the Western allies continue to pique concerns of escalated military conflict.

Britain, however, denies that its warship was in Russian-controlled waters — and says it was never fired upon.

Either way, Russia is clearly flexing on NATO powers, and seems to want the world to know it’s ready to escalate violence should it be given the slightest reason to do so.

This is not the first time this year that our eastern adversary has made such a move, either.

In May, Russia reneged on a promise to withdraw a heavy military presence on the Crimean border with Ukraine as NATO partners were conducting exercises in Eastern Europe. In April, Russia had promised to withdraw the 100,000 troops it had deployed to the region “helping to smooth preparations” ahead of a meeting between President Joe Biden and Putin in June, only to leave 80,000 of those troops in place when the NATO forces arrived in the region.

The fact that this promise was made to ease tensions ahead of the Putin-Biden summit made it all the more significant that Russia turned around and left its troops in place as the U.S. and other NATO troops initiated exercises in Albania and other parts of Eastern Europe.

Then, as Presidents Biden and Putin were meeting in Geneva earlier this month, a Russian fleet was practicing taking down aircraft carriers in the South Pacific just 35 nautical miles off the coast of Hawaii.

Whether it is U.S. warships or British, an attack on any NATO nation is an attack on every NATO nation, and as the leader of the most powerful nation in this Western alliance by far, Biden has a pressing responsibility to check Russia amid these aggressive moves.

Yet he’s over here, bumblingly telling American citizens what they’d need to overthrow their own government and struggling to keep his words straight.

He can’t give a speech without a teleprompter — and he couldn’t even meet with Putin without bringing along flashcards or yelling at a reporter. When asked about Russia’s military aggression a few days earlier while in England for the G-7 summit, the leader of the free world couldn’t answer without mixing up Libya and Syria — three times.

Is it any wonder Russia feels so confident flexing on NATO allies?

Whether Russia is fabricating stories to provoke Western allies or one of our closest allies is straying dangerously close to provoking this adversary, in order to avoid a major global conflict, the United States needs to practice firm, stern and tactful diplomacy right now.

Russian and American outfits, along with other NATO forces, are already stationed in uncomfortable closeness in places like Syria and the Baltic states, so a small clash off the coast of Crimea could hardly be restricted to that region. This conflict easily has the making of a third world war, if we’re not careful.

The chilling thing is, it’s hard to imagine Biden exercising the kind of leadership it would take to prevent war or lead our country into a successful military campaign against Russia’s encroachment against Western allies, which is probably why the Kremlin is provocatively ramping up the aggression.

When President Donald Trump was in office, the establishment was convinced that small armies of Russian trolls and bots were poised to take down our entire democratic system.

Well, now Russia says it is literally firing on our allies to a degree not seen since the Cold War — where is the strong leadership to be found? Certainly not in the White House.

Continue reading: Russia Warns: Next Shots at NATO Warships Will Be 'Right on Target' ...

These rogue countries being run as a terrorist country will likely push the world into WWIII, especially now that America is no longer the strong country that had strong influence over these countries. Watch as china, russia, iran, N. korea, etc, become a force to rule the world.

Putin sized bidumb up and is ready to push

Soon after you fire that shot your whole country will feel such a glow, just before the skin falls off of their Bones!

They are poking the idiot! It’s funny.