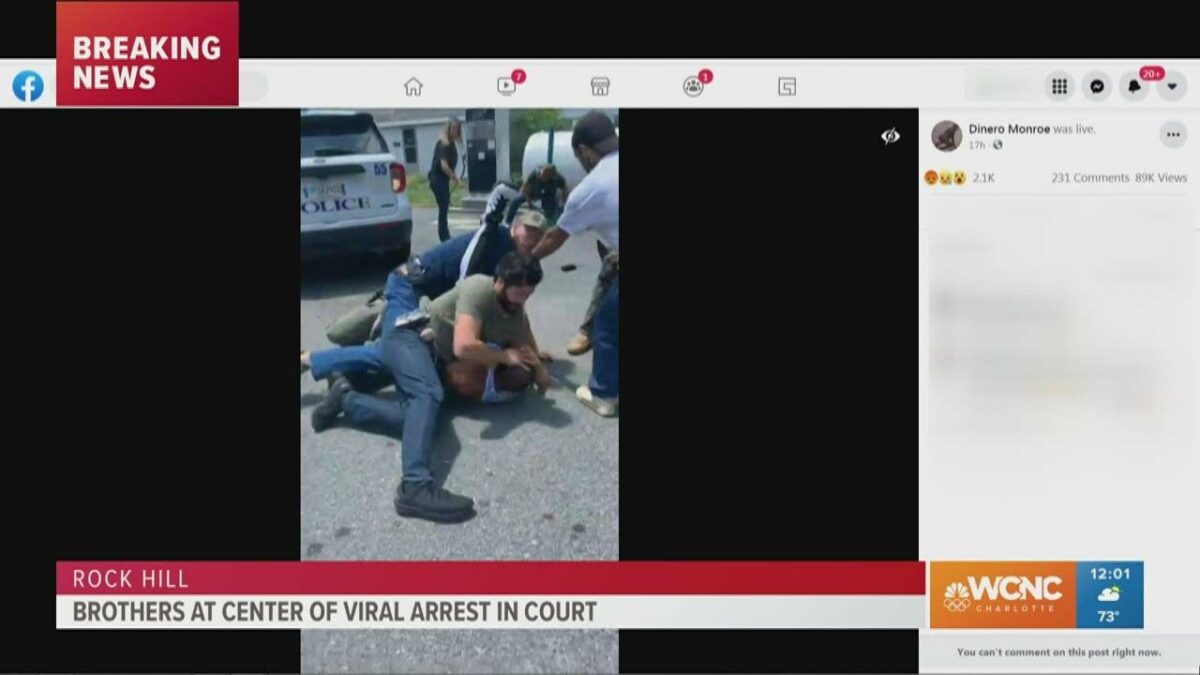 A lone police officer faced down a Black Lives Matter mob that had set fires outside a police station in Rock Hill, South Carolina, to protest the arrest of a black man who is a convicted crack dealer.

The officer was seen walking toward the angry mob to clear the street so firetrucks could drive through to extinguish the blaze raging on the lawn of the local police station, according to videos posted to Twitter on Wednesday by reporter Hunter Saenz of WCNC-TV.

The crowd stood around as the fires raged, and one of the protesters waved a large Black Lives Matter flag.

Fire continues to burn. At one point a woman on a loud speaker asked protesters to block the street so firefighters couldn’t get in if they responded. No authorities are around. Protesters are huddled. @wcnc pic.twitter.com/obhKFnoRQo

When the officer arrived and walked toward the group, many in the crowd shouted at him. According to Saenz, one of the “protesters” threw a rock at the cop, who remained calm even as the angry throng berated and surrounded him.

A lone officer drove in near protesters to escort firefighters to put out the fire. Things got heated. At one point we saw a person throw a rock at the patrol car and then a rock appeared to be thrown at the officer. @wcnc pic.twitter.com/2oJ4ureaLF

The riots reportedly erupted after a Facebook video of an arrest at a gas station went viral.

In the video, a man identified as Ricky Roderick Price — who has a criminal record that includes dealing crack — was seen being punched by an officer while he was resisting arrest.

Moments later, a second man — later identified as the suspect’s brother, Travis Price — also scuffled with cops after allegedly trying to take crack cocaine, marijuana and a gun from his brother’s car.

Like his brother, Travis Price, also resisted arrest, resulting in a physical confrontation with police.

In both instances, it appears that resisting arrest led to the escalation.

In a statement, the city of Rock Hill explained that police had pulled Ricky Price over after he “made an illegal turn and changed lanes unlawfully.”

According to police, that’s when he began “talking on his cell phone, telling his brother where he was stopped by officers.”

Because police were aware of Price’s prior drug conviction, they “called for K-9 to conduct a vehicle sniff. K-9 was alerted to the presence of illegal narcotics in the vehicle. Price was asked to step from the vehicle while officers conducted a search.”

The statement continued: “During the search, Officers located two bags of Marijuana hidden in the driver’s door panel. Officers then placed Price under arrest and into handcuffs. Officers also located a 9mm pistol in the back seat of the vehicle.”

While police were searching Price’s car, his brother arrived on the scene and approached the officers,” the city said.

“Travis Price attempted to gather the belongings Officers were removing from Ricky’s person and was told to move back,” it said.

“Travis then used his body to bump the Officers backward as he continued trying to get near his brother to reach for the belongings while yelling belligerently.

“Travis continued his non-compliance and Officers began struggling with Travis. While attempting to gain control of Travis, Officers and Travis went to the ground.”

The situation with Ricky escalated when he asked the police if they could remove his handcuffs so he could take off his jewelry, according to the statement.

When an officer complied and removed the cuffs, “Ricky attempted to flee and threw several punches. One of the punches struck an officer in the face,” the city said.

The officer responded by punching back, “striking Ricky in the nose,” causing a nose bleed.

Eleven protesters were arrested and two police officers were placed on administrative leave, according to WCNC.

Republican Rep. Ralph Norman of South Carolina echoed the sentiments of numerous Americans who are exhausted by the nonstop anti-police “protests” by praising law enforcement for putting up with mass demonization, abuse and attacks.

“As loudly as I can say this: THANK YOU to the Rock Hill Police Department,” Norman said in a statement on Thursday. “I’m so fed up with those who demonize our law enforcement officers.”

Norman said “our officers were doing the absolute BEST THEY COULD to get those suspects apprehended and keep the situation from escalating any further.”

As loudly as I can say this, THANK YOU to the Rock Hill Police Department…https://t.co/dLLXhotiEm

The congressman noted that today’s emotionally incontinent leftists get triggered so easily without even knowing the facts.

“A cell phone video — one that contained no footage whatsoever of the events leading up to that moment — was all it took to get protestors riled up, long before they themselves had ANY IDEA what actually took place,” Norman said.

“Not only that, but several of the protestors set fires next to the police station in what could only be described as an attempt to burn the place down,” he said. “It took a police escort to get the fire department on scene, but not without rocks being pelted at the police car. It’s unbelievable!”

Fortunately for the entire country, the Price brothers are both alive, thereby making them ineligible to become the next left-wing icon à la George Floyd.

Unfortunately, the summer has just begun, so it surely won’t be long before race riots mar this season as they did last year.

Time for Americans to take our country back from these blm/antifa criminals. Back your police or become even more under the control of these criminals.

The Mossad used to snipe at protestors who got violent in Israel, intentionally just wounding a few – which stop the violence. Maybe that is what it will take here, as well. Maybe that technique should be field-tested in Portland, OR.

Those involved are Broad River bound. tell them you want cell block Congaree.