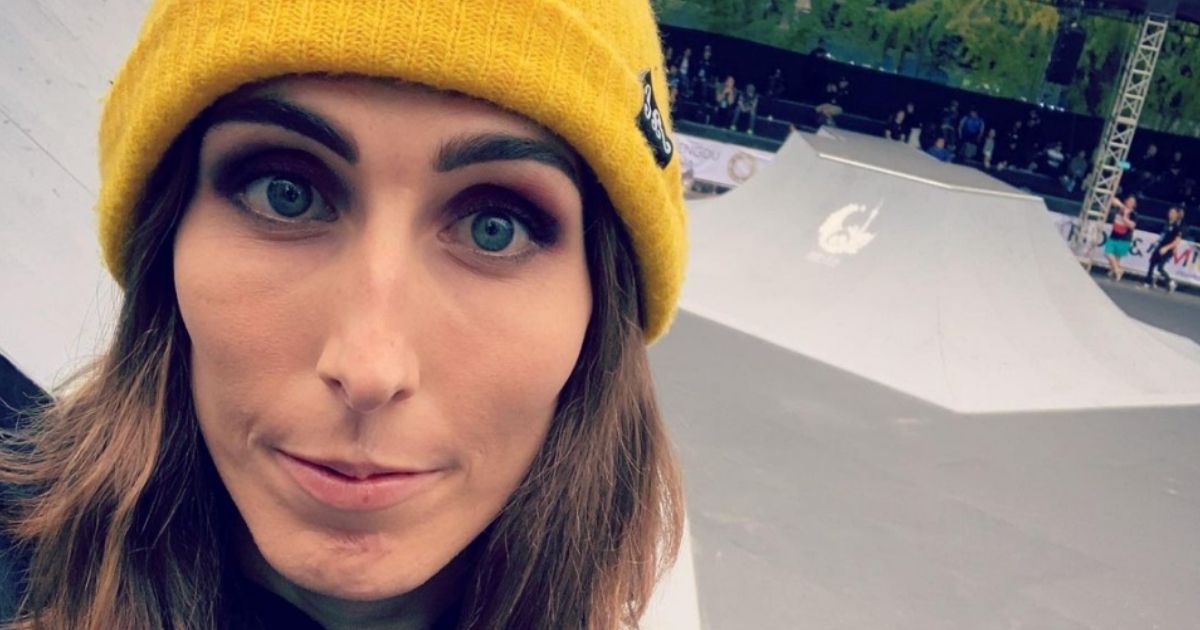 The following article, First Transgender American Olympian: 'My Goal Is to Win the Olympics so I Can Burn a US Flag on the Podium', was first published on Flag And Cross.

As if news of the first transgender American to head to the Olympic Games was not fodder enough for culture war controversy alone, the individual who has been given the opportunity to assume this title declared last year that he would burn the American flag on the podium were he to win a medal for the United States.

The person in question, Chelsea Wolfe, will be the first transgender athlete to travel to the Olympics with a U.S. team, having been chosen as an alternate for the American women’s BMX team.

Wolfe, as you may have guessed, is a man who identifies as female. Should one of the two women chosen to represent the United States in Tokyo in late July — Hannah Roberts and Perris Benegas — drop out, he will be hitting the track in their place, HuffPost reported.

This week, however, Wolfe is in full damage control mode after netizens ran across an old social media post of his from last year in which he angrily declared his goal was to win the Olympics so he could burn an American flag on the podium because he disliked Trump-era federal transgender policies.

This is no exaggeration — it’s pretty much exactly what he said.

As initially reported by journalist Ian Miles Cheong, Wolfe wrote on Facebook in March 2020, “My goal is to win the Olympics so I can burn a US flag on the podium,” along with a PinkNews article on the Trump administration’s stance towards transgender individuals.

In the comments of the now-deleted post, he also not-so-slyly suggested that he’d like to blow up then-President Donald Trump’s head with dynamite.

“I would never say that someone should explode the head of the president. That would be illegal,” Wolfe wrote in one comment, which was followed up with a second that read, “But I will say ‘with dynamite.’ Because that’s just a sentence fragment and doesn’t actually mean anything. It’s not necessarily related to the sentence that came before it.”

Well, as it happens, when you get picked to travel to a foreign country on behalf of the United States with the potential of competing against world-class athletes from around the world, it’s a really, really bad look to have vowed to burn your nation’s flag while being awarded a medal as its representative.

So now, Wolfe is trying to explain why this undeniably and vehemently anti-American statement was somehow totally not un-American and that, really, he actually loves his country.

“Anyone who thinks that I don’t care about the United States is sorely mistaken,” Wolfe told Fox News this week.

“One of the reasons why I work so hard to represent the United States in international competition is to show the world that this country has morals and values, that it’s not all of the bad things that we’re known for,” he explained.

“I take a stand against fascism because I care about this country and I’m not going to let it fall into the hands of fascists after so many people have fought and sacrificed to prevent fascism from taking hold abroad,” Wolfe continued, clearly confident that he understands what fascism is and what Americans who died to prevent the spread of fascism were fighting against.

“As a citizen who wants to be proud of my home country, I’m sure as hell not going to let it take hold here,” he said.

Putting aside entirely the fact that he seems to conflate protecting women and girls from the very real and serious concerns of allowing men and boys to invade female-only spaces such as bathrooms, locker rooms and the competitive field with 20th century European authoritarian movements, there is no amount of spin you can put on Wolfe’s declaration that he longed to burn the American flag in front of the world that makes it understandable.

There would have been many ways for him to express his frustration with the Trump administration for its policy on an undeniably divisive and controversial issue that didn’t involve destroying the banner of our nation in one of the most disgraceful manners possible while receiving a medal on behalf of our country.

No one who is patriotic and would be genuinely proud to represent the United States would declare that he wanted to set Old Glory aflame because he was angry about the policies of the administration that was in office — conservatives, if anything, are all the more patriotic when there’s a Democrat in office (although to be fair, that’s often because he’s threatening to destroy our national institutions and traditions).

Yes, it is very difficult to believe that Wolfe could possibly be proud of his country unless it conforms exactly to his radical notion of what “morals and values” are and ditches all the “bad things that we’re known for,” not when he so flippantly expressed a desire to burn its flag.

Thankfully, he’s unlikely to compete, let alone win a medal, at the Summer Games next month, so even if he still harbors a wish to make such a radical statement against the nation he’s supposed to be representing (as a woman, no less), the dramatic move is not going to be happening any time soon.

Yet it is not his vehemently expressed hatred for our country that’s so concerning, as there’s a good chance he realized the gravity of his words when he gained more media attention.

No, it’s the fact that hatred for our country has gotten so incredibly normalized — I would also even go so far as to say it is en vogue — that he didn’t even think twice about posting his jaw-dropping message last year as he looked forward to the potential of competing as an Olympian.

Wolfe is a product of this disturbing movement, and even if he’s eaten his words, it’s unlikely he’s shredded much of his animosity toward our country and its values.

No matter how you slice it, Wolfe does not appear to be fit for the U.S. women’s BMX team — even if he were a woman to begin with.

Continue reading: First Transgender American Olympian: 'My Goal Is to Win the Olympics so I Can Burn a US Flag on the Podium' ...