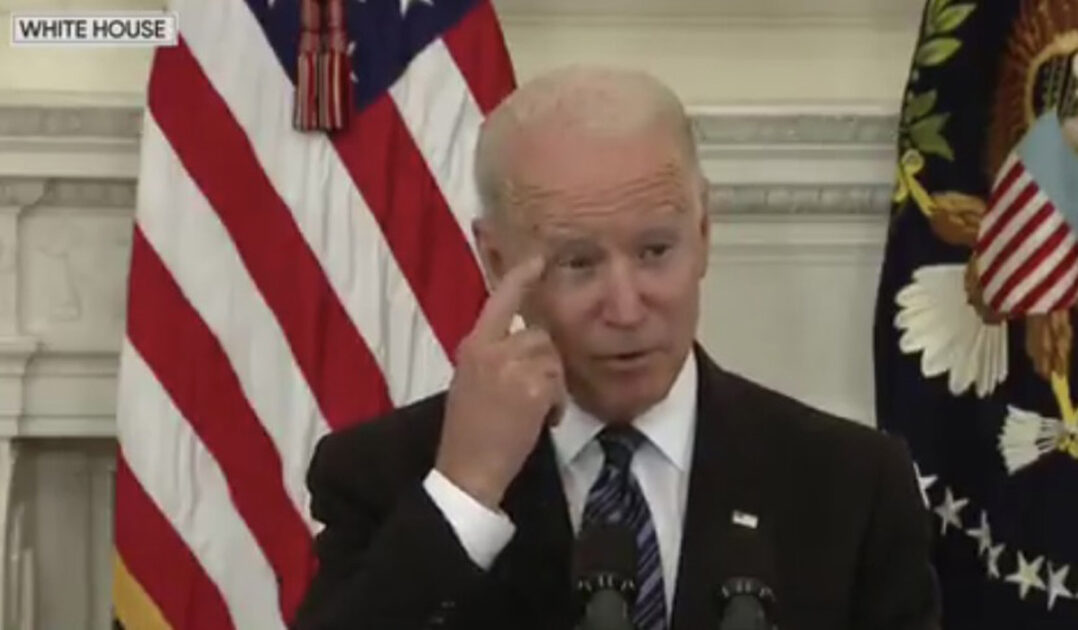 The following article, Biden Warns Americans that He Has Nukes and F-15s to Kill Lawful Gun Owners if They Oppose Him, was first published on Flag And Cross.

Joe Biden has once again warned lawful gun owners that he has nukes and F-15 fighter jets to take down gun owners who might want to protect their Second Amendment rights.

On Wednesday, the commander in cheat once again warned gun owners that he has an army at his command to implement his extreme, anti-gun agenda.

“Those who say the blood of Patriots, you know, and all the stuff about how we’re gonna have to move against the government,” Biden warned. “If you think you need to have weapons to take on the government, you need F-15s and maybe some nuclear weapons.”

BIDEN: You’ll need F-15’s and nuclear weapons to take on the government pic.twitter.com/dAZ0yeaq2y

Biden also lied saying that the 1994 assault weapons ban lowered crime. This is a very old lie the left has trotted out whenever they want to push their anti-Second Amendment agenda.

A 2004 Department of Justice funded study from the University of Pennsylvania Center of Criminology concluded the ban cannot be credited with a decrease in violence carried out with firearms. The report is titled “An Updated Assessment of the Federal Assault Weapons Ban: Impacts on Gun Markets and Gun Violence, 1994-2003.”

“We cannot clearly credit the ban with any of the nation’s recent drop in gun violence. And, indeed, there has been no discernible reduction in the lethality and injuriousness of gun violence, based on indicators like the percentage of gun crimes resulting in death or the share of gunfire incidents resulting in injury,” the summary of the report on the study’s findings states. “The ban’s impact on gun violence is likely to be small at best, and perhaps too small for reliable measurement. AWs [assault weapons] were used in no more than 8% of gun crimes even before the ban.”

A separate study by Quinnipiac University found the same facts.

“The purpose of the present study is to determine the effects of state-level assault weapons bans and concealed weapons laws on state-level murder rates. Using data for the period 1980 to 2009 and controlling for state and year fixed effects, the results of the present study suggest that states with restrictions on the carrying of concealed weapons had higher gun-related murder rates than other states,” the study said. “It was also found that assault weapons bans did not significantly affect murder rates at the state level. These results suggest that restrictive concealed weapons laws may cause an increase in gun-related murders at the state level.”

Biden’s comments are part of his new agenda to destroy the Second Amendment, a push he hopes will help Democrats get elected (and re-elected) in the coming 2022 mid terms.

The coming elections will likely be a battle ground between pro safety Republicans and the anti-cop leftists in the Democrat Party.

Continue reading: Biden Warns Americans that He Has Nukes and F-15s to Kill Lawful Gun Owners if They Oppose Him ...

Biden is a Baffoon

Creepy Joe said that those who wanted to overthrow a tyrannical government would need F-15 fighter jets and nuclear weapons. Perhaps, had he gone to Viet Nam instead of receiving multiple deferments he would have some idea what people without fighter jets or nuclear weapons could accomplish.
Just as an aside, the only places worthy of attack by nuclear weapons are already disarmed DemoSocialist strongholds.

Did Biden ever stop to think that a riled up Populace in this country could take down any Government just through Selective Killing of Leftist Politicians and Judges? Call it the Clinton Effect!