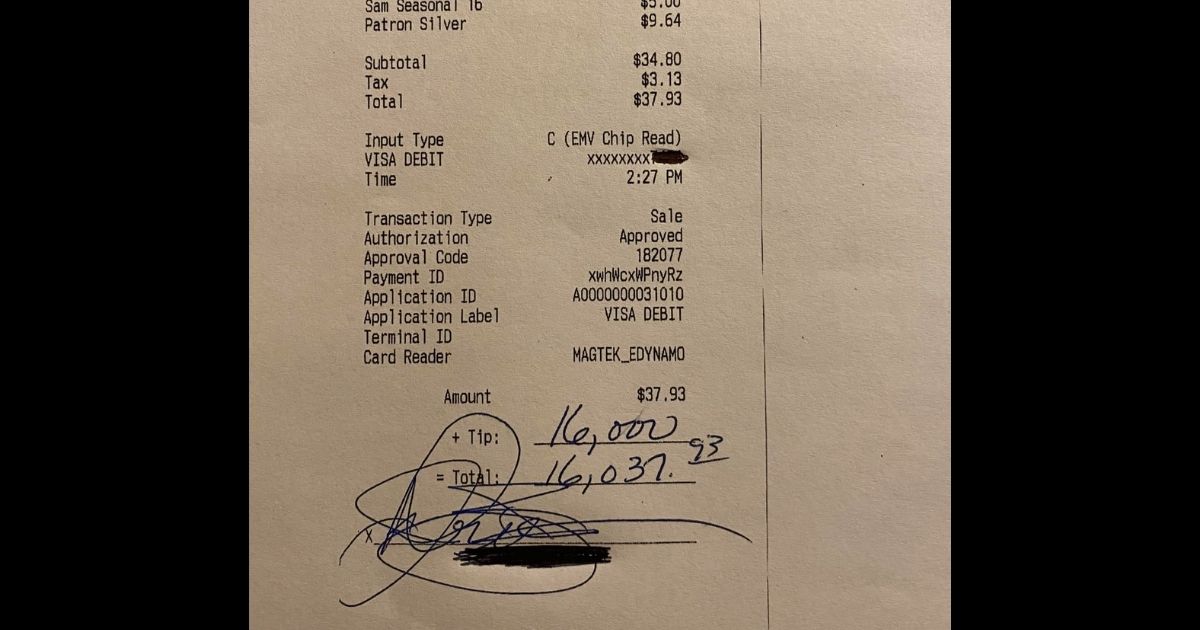 The following article, Anonymous Diner Leaves 16K Tip for Entire Restaurant Staff on $37 Bill: 'It's Unbelievable', was first published on Flag And Cross.

Many businesses based on food and drink have faltered over the last year and a half as regulations fluctuated and dining in became but a distant memory.

Stumble Inn Bar and Grill in Londonderry, New Hampshire, was one of the ones that made it, thanks to their loyal customers.

But few are so loyal or generous as one unnamed gentleman who gave a tip so incredible even the owner was hesitant to believe it.

The man came in on June 12, ordered two chili cheese dogs, some pickle chips and a few drinks. His bill came to $37.93.

But when he went to pay, he kept telling the woman at the register, “Don’t spend it all in one place.” It took her a minute to put it together, according to Mike Zarella, who owns the restaurant.

“It was on the credit card statement, they put down next to the register, and he said three times ‘Don’t spend it all in one place,'” Zarella said, according to WABI-TV. “That’s what made her flip it over and look. And she’s like ‘Oh my god, are you serious?’ And he’s like, ‘I want you to have it. You guys work hard.'”

The bar manager even went out to the man to make absolutely sure the number of zeros on the tip was accurate.

“Thought it was a mistake,” Zarella continued, “could have been like a maybe $160 tip and he added extra zeroes, and the bar manager talked to the gentleman and he said ‘No, it’s $16,000.'”

“He just said that they deserve it. They work very hard.”

Even after checking with the customer, the gift was more than the owner could wrap his head around, and he warned his crew it might not go through.

“It’s unbelievable,” Zarella said, according to Fox News. “I just never in my life thought somebody would come in here and do that. I didn’t even think it was going to be true until it cleared the bank, which was last Friday. I was like, ‘No way.’ I told my staff don’t get too excited because this doesn’t happen.”

The man wasn’t famous. He didn’t want recognition. The tip amount was accurate, and it ended up being split several ways — a fact that has proved to be a controversial one for many readers.

While many believe the tip was intended for one individual, one woman who claims to work at Stumble Inn said it was more complicated than that.

“We all bartend and serve together so we share tips,” Tarah Nolan wrote in a comment on Zarella’s Facebook post. “Everyone that worked that morning will be splitting it hourly as they worked together as always. It wasn’t just one person that served him.”

“I’m very happy for them and it was insanely generous … It was 100% real. The bank checked into it because of the amount and the guy has been in since.”

Zarella said he even tried to comp the customer’s next meal when he came back later, but the generous mystery man declined. The tip is the largest the bar and grill has ever received and was certainly appreciated by all the recipients.