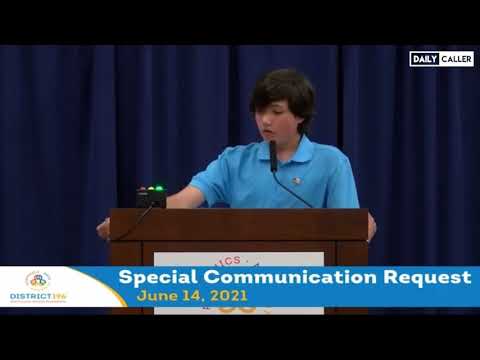 The following article, You're 'Acting Like Some of Us Are Guilty for Just Existing': Watch Student Defy Woke School Board in Front of Parents, was first published on Flag And Cross.

You probably haven’t heard of Brad Taylor before. My guess is that this might not be the last time you hear his name.

The 15-year-old Taylor is — or rather, was — a student at Rosemount High School in Rosemount, Minnesota. He’s decided to leave the district, telling the Minnesota-centric conservative news outlet Alpha News that “it wasn’t a healthy environment for any student to be in” due to the encroachment of critical race theory.

However, before he left, he decided to give the school board in Minnesota Independent School District 196 a piece of his mind. It’s now going viral after being posted to YouTube by the Daily Caller, with over 500,000 views as of Tuesday morning. That’s more than 125,000 per day since it was posted Friday.

In the speech, Taylor criticized the school for promoting a “leftist agenda in class” and said the district’s “schools are quickly becoming a place where promoting activism is actually more important than promoting education.”

Taylor began by going back to the fall, his first day of his freshman year at Rosemount High School, and recounting how “the principal came out and gave us a heartfelt speech about equality and standing together.”

The principal, he said, listed various races while “expressing how much they matter and how important they are.”

“But never once did he mention an identity that reflects me or half the kids that were in the class.”

There was a bit of what the kids might like to characterize as a “sick burn” next — with Taylor noting to the board members, “I know you haven’t been to school in a while and I know most of you don’t have any kids left in the school district.” Apparently, those who make the rules in District 196 don’t necessarily have any skin in the game and, one might guess, are more motivated by political than parental concerns.

“You must admit how uncomfortable it will be to be characterized just by your skin color on the first day of school and be thought that you were wrong just because of your skin color,” Taylor continued. “I’ll never forget the look one of my friends gave me from across the room as we were sitting there listening to this blatant bias being expressed in the so-called equity statement by the leader of our school.

“To be clear, I don’t need you to tell me that I matter, but hearing the condolences given to other races and leaving just one race out, inevitably you’ll start to feel like you’ve done something wrong,” he added. “In our principal’s attempt to unify us, he instead created unwarranted boundaries and barriers between his students, pitting us against each other based on characteristics that we can’t control.”

In his speech, Taylor told the board he didn’t just hear from other students who felt pressured to conform to a certain viewpoint in order to secure a good grade. He said he was also approached by teachers who told him they agreed with his views but couldn’t express that because they feared retaliation from the district.

“There is clearly only one way to think in this district,” Taylor said.

Taylor asked the board members to “look at yourselves in the mirror tonight and ask, are you really standing up for the equality of all people, or are you just pushing a damaging political ideology on our students?”

He added that he would be attending a Christian school online and while there would be sacrifices, like not being able to walk in graduation, “I will be able to learn an environment that is not intent on punishing me daily for my skin color and political views.”

Even if the board members wanted to write Taylor’s speech off as “malarkey or Fox News talking points,” he urged them to think about it and promised to do something big with his life.

“It’s a shame that you’re not going to be able to say that I was an alumni of RHS in District 196,” he said, ending his speech to applause.

He amplified his points in an interview with Alpha News.

“The problem is these school districts are acting like some of us are guilty for just existing, and somehow inadvertently responsible for any injustice [and] from what I saw, it made all the kids who have been in RHS feel uncomfortable and tense,” Taylor told the outlet.

However, he said they “are afraid to say or do the wrong thing.”

For instance, he said, the school mandated students spend nine minutes and 43 seconds in “silent reflection” on the anniversary of the death of George Floyd in custody of Minneapolis police last year. Taylor told Alpha News that teachers had said students could “just do homework” during the time, but he said students felt pressure they would be called “racist” if they questioned the “proclamation” at all.

Now, Taylor told Alpha News, he and his mother, Tiffany, are getting “lots of messages from other [District] 196 parents who are also concerned about their kids” and asking for guidance.

“If just one person stands up, then other people will feel more empowered to do the same,” Taylor said.

Over 200 parents and other members of the local community attended the June 14 meeting where he gave the speech, according to Alpha News. It’s had half a million views online.

There’s no way to judge empowerment, but Brad Taylor’s certainly got people’s ear about public school indoctrination — and he’s got you believing this isn’t the last you’ll hear of him.

Continue reading: You're 'Acting Like Some of Us Are Guilty for Just Existing': Watch Student Defy Woke School Board in Front of Parents ...

Why are parents and taxpayers allowing their school boards to put CRT into the public schools in the first place?

Those pushing the effort to diminish the white race are the true racists in America, and must be feeling their own guilt, no matter ‘their’ race.