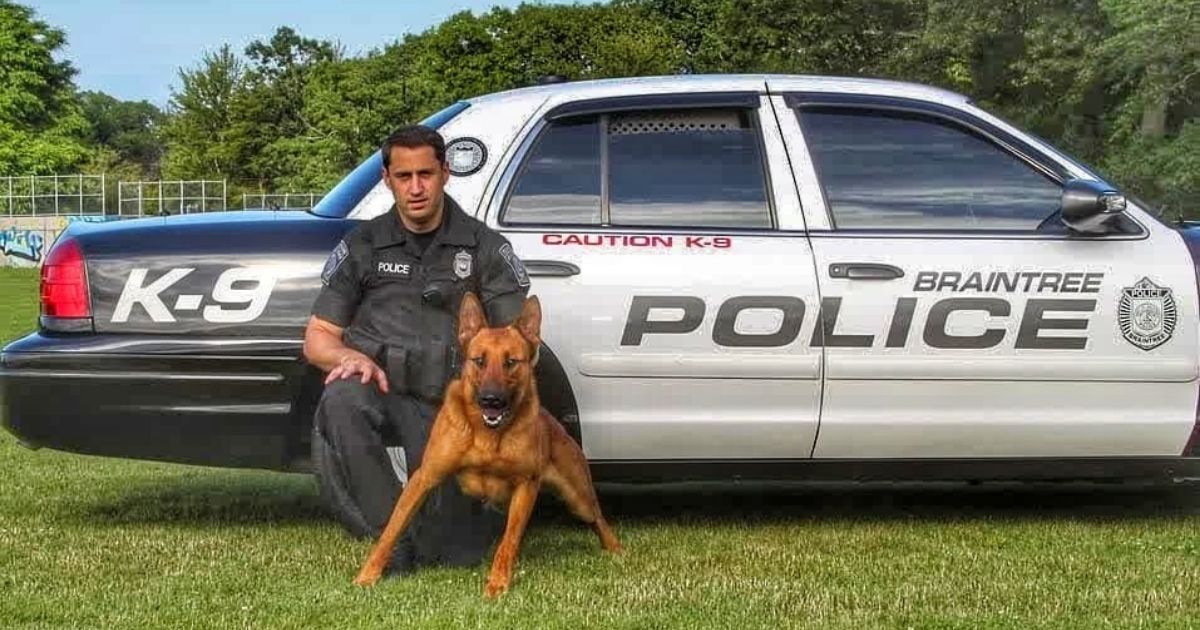 The following article, K9 Dies 'A True Hero' During Shootout, Saves Lives by Diverting Armed Suspect's Attention Away from Officers, was first published on Flag And Cross.

In August 2009, in Slovakia, a Belgian Malinois was born. He made his way to the United States, where he eventually met Officer William Cushing, Jr., and was named “Kitt.”

Together, the two were certified through a canine academy, and Kitt began a long and impressive career as a police K9 with the Braintree Police Department in Massachusetts.

In 2016, Kitt was awarded the Braintree Police Medal of Valor after protecting multiple officers during an “armed confrontation,” according to The Patriot Ledger.

In 2020, Kitt successfully found another dangerous suspect who seriously injured others after a “shooting incident.”

On June 4, 2021, Kitt proved his skill and loyalty once more — but he paid the ultimate price this time.

Cushing and two other officers were looking for a suspect known to be armed who had been involved in a domestic dispute near the Braintree Village apartment complex. As they drew close to the suspect, the man began firing at them.

“As the officers approached the suspect’s position, the officers were ambushed and gunfire was exchanged at close range,” a statement concerning the situation read. “Officers Cushing and Donoghue sustained multiple gunshot wounds and Officer Seibert, a former combat medic of the United States Army, provided immediate medical attention before the officers were transported to area hospitals or further treatment.”

“As the suspect repeatedly fired his weapon at very close range at Officers Donoghue, Cushing and Seibert, K9 Kitt heroically advanced towards the subject causing him to turn his attention away from the officers,” the statement continued.

“If not for the actions of K9 Kitt, the circumstances that afternoon could have been dramatically different. K9 Kitt valiantly gave his life for the life of his beloved handler and his partners and died a true hero that afternoon.”

On June 9, a procession was held for the noble canine as his remains were taken to a funeral home.

“K9 Kitt was transported in Officer Cushing’s cruiser driven by a fellow officer as K9 Units from across the state participated in the procession,” the Braintree Police Department shared on Facebook.

The memorial service was held on June 20, and many turned out to honor the loyal dog’s years of service and the gift of his life.

“He took a bullet for his partner and paid the ultimate sacrifice,” Diane Andre, who was in attendance for the procession, told WBTS-CD. “And it is important to be here and respect what he did for 12 years.”

“I think the K-9 did a lot to protect the two officers and without that K-9, there may have been worse results,” another attendee, Gary Roden, said.

The police department’s End Of Watch post for Kitt has been shared thousands of times as people from all over are paying their respects to the brave dog.

“K9 Kitt started with us 12 years ago,” the department wrote in its post. “Going through K9 patrol school, you came out…guns blazing…during your service you apprehended countless criminals, often in the dead of night…through thick brush, and insane weather. You found bad guys, wandered elderly, firearms and other ballistic evidence.

“You were never shy to help out at K9 Demo’s or our Citizen Police / Junior Police Academies. You also never declined a moment to be showcased on our social media.”

“We will forever miss and remember you buddy. Free Time….”