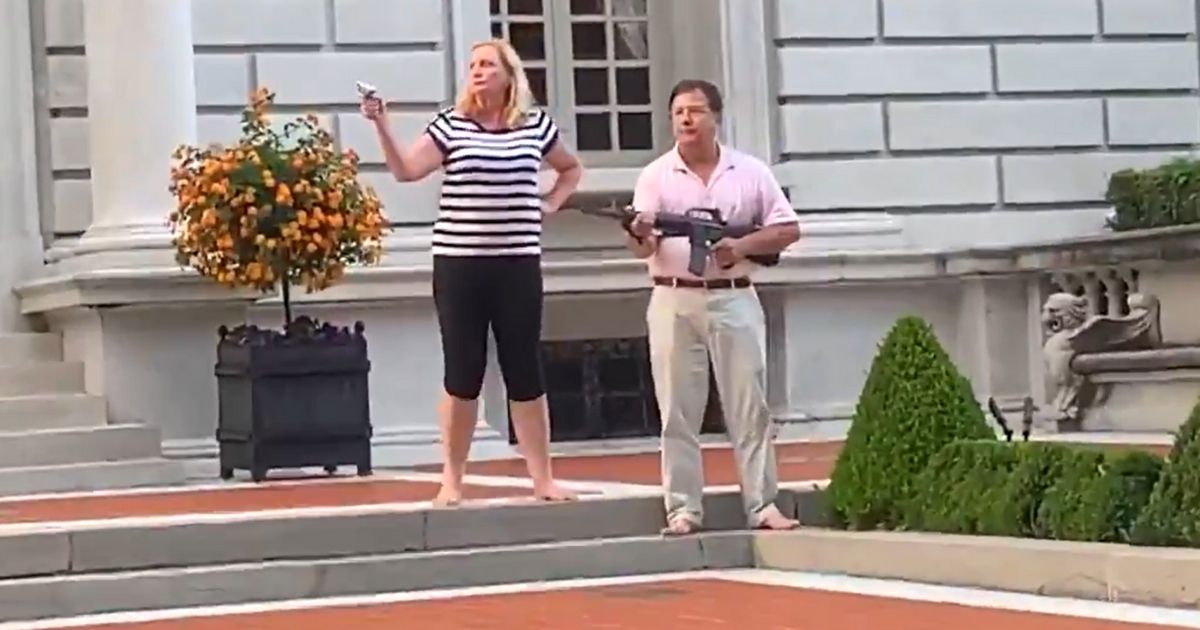 The following article, McCloskeys Get the Last Laugh, Show Off Brand New AR-15 After Having Guns Seized, was first published on Flag And Cross.

The political persecution of a couple who dared to exercise their Second Amendment rights after a mob of Black Lives Matter demonstrators 300 strong entered their private community illegally last summer has finally come to a conclusion.

It all ended with a whimper Thursday at the Carnahan Courthouse in St. Louis when Mark and Patricia McCloskey, 64 and 62, respectively, pleaded guilty to misdemeanors.

They were also required to surrender their firearms.

The McCloskeys, both attorneys, were not without protection for long.

In photographs McCloskey posted to Twitter on Saturday, he is grinning from ear to ear as he shows off his new AR-15. The caption says, “Checking out my new AR! #2A #MOSen”

Checking out my new AR! #2A #MOSen pic.twitter.com/Qa5UKupXSX

I’m glad this sorry saga had a relatively happy ending for the McCloskeys, but frankly, I don’t think they did anything wrong.

Neither did the state’s Republican governor. According to the Post-Dispatch, following the incident, Gov. Mike Parson said he would pardon the couple if they were convicted.

Imagine the terror they must have felt as a BLM mob, some of whom reportedly were armed, stormed into their neighborhood and stopped in front of the McCloskeys’ mansion.

One’s first reaction would surely be to call the police. But what if the police never came?

“It was like the storming of the Bastille, the gate came down and a large crowd of angry, aggressive people poured through,” he said. “I was terrified that we’d be murdered within seconds. Our house would be burned down, our pets would be killed.”

He added, “One fellow standing right in front of me pulled out two pistol magazines, clicked them together and said, ‘You’re next.’”

Police said that when the McCloskeys demanded the group leave their property, they “began yelling obscenities and threats of harm to both victims,” according to USA Today.

This was the situation they’d been confronted with on the evening of June 28. When the couple saw that several members of this group were armed, they called 911, grabbed their legally owned firearms and faced the mob that had trespassed on private property.

The police never showed up. In the absence of the police protection U.S. citizens have come to expect, the McCloskeys, armed with a rifle and a pistol, were forced to fend for themselves.

Within days, St. Louis police executed a search warrant at the McCloskey home. The police seized the rifle Mark McCloskey had held during the encounter and were told that the pistol used by his wife was in the possession of their attorney.

BREAKING: Sources tell Five On Your Side police seized one of the weapons, the rifle, from the couple and they told police their attorney has the pistol seen in photos. https://t.co/MMUWIz7iJs

Although the use of firearms to protect one’s life and property is the reason our founders included the Second Amendment in the Bill of Rights, leftists questioned the couple’s actions.

St. Louis University lawyer John Ammann spoke to KDSK-TV in St. Louis shortly after the incident and succinctly summed up their position. Ammann said the McCloskeys’ actions could conceivably be considered assault because they caused protesters to fear for their safety. “People have a right to threaten force if they are threatened,” he said.

He went on to say that if the protesters were simply walking by the house and the homeowners were not in danger, it would be unlawful to threaten lethal force.

Let’s get this straight. Ammann was concerned that the St. Louis couple — who protected their house from an angry mob who stood before their home and allegedly threatened to burn it down and murder them — may have put members of that mob in fear for their safety. Is he kidding us?

The woman behind the search warrant was St. Louis Circuit Attorney Kimberly Gardner. According to Fox News, Gardner’s 2016 campaign was backed by far-left billionaire George Soros.

The day after the June 28 incident, Gardner’s office issued a statement saying she was “alarmed” that “peaceful protestors were met by guns and a violent assault.”

Incredibly, many on the left agree with Ammann and Gardner.

Sorry, but a mob of BLM activists trespassing through a private neighborhood forfeits its claim to the term “protestors.” The McCloskeys told reporters that once they noticed two members of the mob were armed, they armed themselves and called 911. As mentioned earlier, the police never came.

The BLM demonstrators were not the victims here. The McCloskeys were entirely justified in their actions. Gardner’s concern over the couple’s threat of force against the “peaceful protestors” is just another politically motivated lie.

Situations like this are precisely why Americans own guns and why we need to preserve our Second Amendment rights.

After all of their intimidation, Mark McCloskey walked out of the courtroom — and into a gun shop.

Continue reading: McCloskeys Get the Last Laugh, Show Off Brand New AR-15 After Having Guns Seized ...