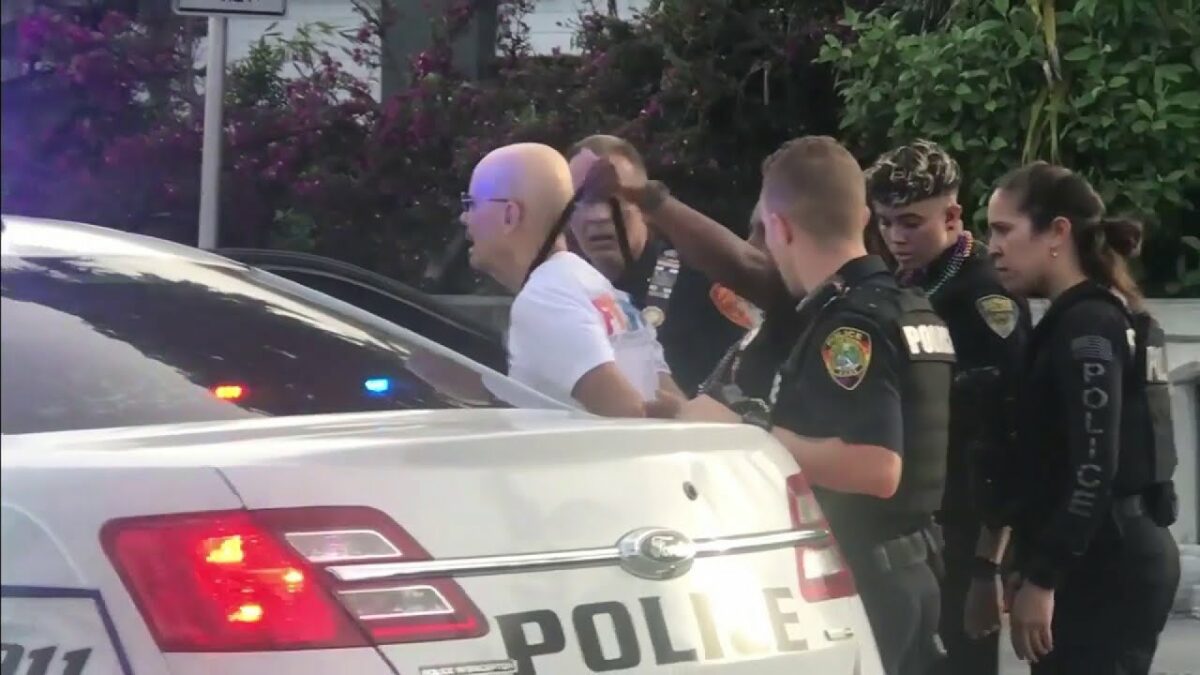 Just as a gay pride parade in Broward County, Florida, was getting ready to step off on Saturday, it devolved into a scene of chaos and death.

A pickup truck that was in the section of the parade reserved for floats plowed ahead, just missing a car that contained Democratic Rep. Debbie Wasserman Schultz of Florida, before striking at least two other people.

One man was killed and another injured, according to WPLG-TV.

The parade was in Wilton Manors, a small, incorporated city just outside Fort Lauderdale.

WPLG reported that the man taken into custody was wearing a Fort Lauderdale Gay Men’s Chorus T-shirt. A picture posted to Twitter from the scene showed a rainbow flag in the bed of the pickup truck.

The WPLG report is below:

Justin Knight, president of the group, said the incident, which occurred about 7 p.m., appeared to be accidental.

“Our thoughts and prayers are with those affected by the tragic accident that occurred when the Stonewall Pride Parade was just getting started,” Knight said in a statement, according to WPLG.

“Our fellow Chorus members were those injured and the driver was also a part of the Chorus family. To my knowledge, this was not an attack on the LGBTQ community. We anticipate more details to follow and ask for the community’s love and support.”

The driver told police it was an accident, WPLG reported that it was told by witnesses.

According to a report from WFOR-TV, its sources said the driver told police his foot became stuck between the truck’s gas pedal and brake.

He said the truck missed Wasserman Schultz’s car “by inches” then slammed into a gate and into a plant nursery.

“This is a terrorist attack against the LGBT community,” Trantalis said, according to WPLG.

“This is exactly what it is. Hardly an accident. It was deliberate, it was premeditated, and it was targeted against a specific person. Luckily they missed that person, but unfortunately, they hit two other people,” he said.

Trantalis said a third person was injured, but refused treatment.

Spectator Christina Currie also thought the crash was intentional, according to The Associated Press.

“All of a sudden there was a loud revving of a truck and a crash through a fence,” Currie said, the AP reported. “It was definitely an intentional act right across the lanes of traffic.”

As of Saturday night, Fort Lauderdale police would not discuss possible charges against the driver. The FBI joined the investigation.

“I am deeply shaken and devastated that a life was lost and others seriously injured at tonight’s Wilton Manors Stonewall Pride Parade,” Wasserman Schultz said in a statement.

PRIDE PARADE CRASH: A driver slammed into spectators Saturday evening at the start of a Pride parade in South Florida, killing one person and seriously injuring another, authorities saidhttps://t.co/sZPWF5pNCg

“My staff, volunteers and I are, thankfully, safe. I want to thank our first responders for their heroic efforts as both police and emergency medical personnel stepped into action quickly. We’re praying for the victims and their loved ones as law enforcement investigates and I am providing them with whatever assistance I can. I am so heartbroken by what took place at this celebration. May the memory of the life lost be for a blessing.”

The parade was canceled, but other gay pride events continued as scheduled.