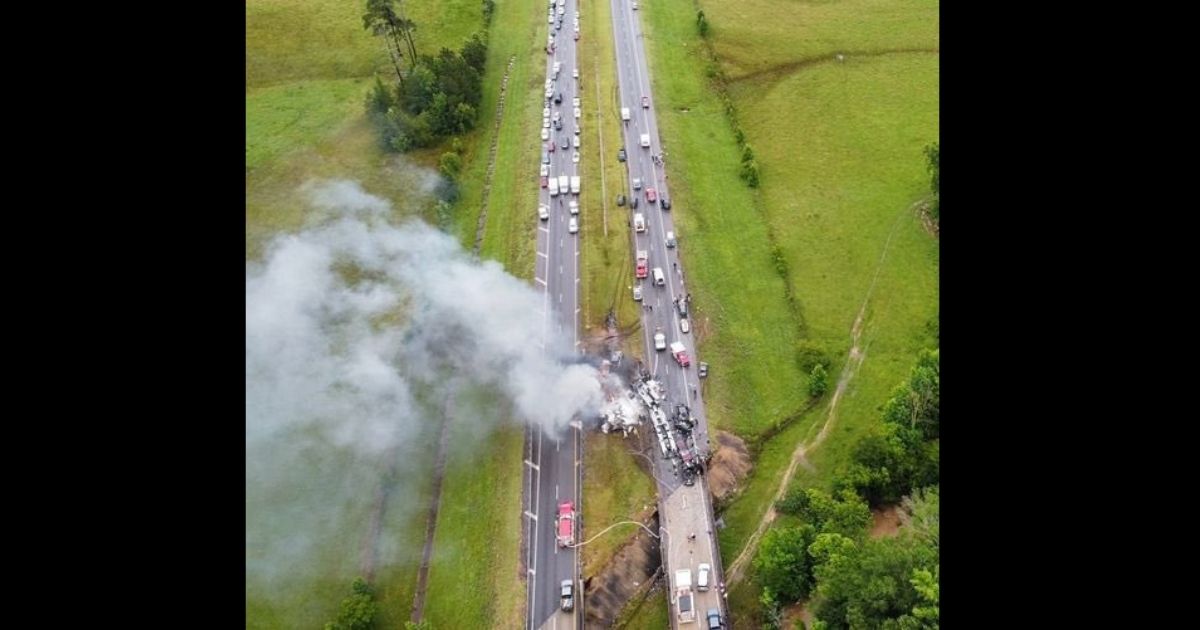 The following article, Alabama Mourns Nine Children, One Adult Left Dead in 'Most Horrific Accident' in County History, was first published on Flag And Cross.

Ten people died in a fiery crash Saturday on Interstate 65 in Alabama.

“This was probably the most horrific accident in Butler County history,” said Butler County Sheriff Danny Bond, according to Al.com. He said that 18 vehicles overall were involved in the collision.

Eight of the victims were in a Tallapoosa County Girls Ranch vehicle. The other two — a man and his 9-month-old daughter — were in a small SUV, Butler County Coroner Wayne Garlock said.

Hydroplaning as a result of the wet roadway is considered to be a contributing cause of the accident.

An official told local media that 10 people – including nine children – are dead after a two-vehicle crash in storm-drenched Alabama. https://t.co/88eU6cgbGe

A bystander dragged the driver of the Girls Ranch bus from the wreck, but could not save the girls, Garlock said.

“It was too late to get back to them because the bus was engulfed in fire,” Garlock said.

The dead girls ranged in age from 4 to 17, he said. Many were from Reeltown.

Photo of the multiple vehicle crash on I-65 near Greenville earlier this afternoon from Rileigh Ray. The entire Interstate remains closed. pic.twitter.com/7jFTcy1Dcg

The bus was driven by Candice Gully, who was the director of the Tallapoosa County facility, said Michael Smith, CEO of the Alabama Sheriff’s Youth Ranches. Two of Gulley’s own children died in the wreck, Smith said. Gulley is recovering, Smith said.

A second Girls Ranch bus was also on the trip. There was no injuries on the second bus. The girls on board that vehicle did not see the carnage, AL.com reported.

“I thank God for that,” Smith said, according to the news outlet.

“All of the families have been notified. We’re certainly in a grieving process,” he said.

“I’ve never seen a tragedy or heard of a tragedy like this in my entire life,” Smith said. “I’m still certainly trying to process what’s going on here, I just know that God is leading me in the direction to continue to try to help the girls who survived and be here with them.”

The children who died included foster children, children placed by families and children whose parents were chaperones on the trip.

“All of the children that are deceased that were on that van loved God and they are in a better place. Our Christian values will get us through this situation. All that we ask your readers do is please keep us in their prayers and pray for our extended family, our ranch family. We need prayer,” Smith said. according to AL.com.

“We have grief counseling. We have pastors meeting with all of our ranches and we’re trying to help them. They’ve been traumatized once again their lives by losing their family. On this ranch, this is their family. They have lost a big portion of their family.”

Smith said the survivors and their families need prayers.

“All of our kids have been through a lot of trauma and they just need help and need love and we love these girls like they are our own children,” Smith said. “I know that God won’t put anything on us that we can’t handle. But I will tell you, I’ve had a lot of questions in the past 24 hours. But praying is healing.”

The victims in the SUV were named as Cody Fox, 29, and Ariana Fox. Hayle Anderson, who was Fox’s fiance, was injured in the crash.