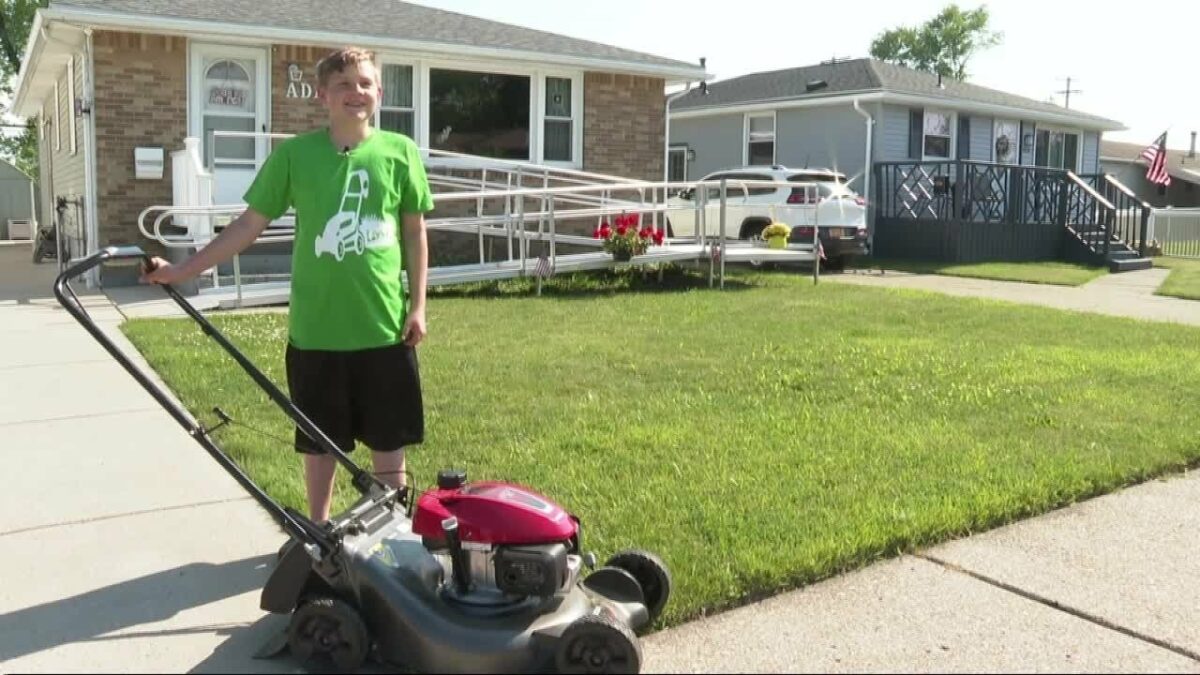 The following article, Teen Sets Out to Mow Lawns of 50 Veterans for Free in Honor of Late Grandfather: 'He Taught Me', was first published on Flag And Cross.

Most people see mowing the lawn as an annoying chore that has to be completed. For 14-year-old Nathan Adams of Buffalo, New York, mowing lawns is his mission.

When he was younger, Nathan learned how to mow the lawn thanks to coaching from his grandpa, Frederick Adams.

“He taught me when I was old enough to push a mower — how to start it and how to make the grass look good,” Nathan said, according to WITI-TV.

Frederick, an Army veteran and volunteer firefighter, passed away in February at age 72 — but he’s left a lasting impression on Nathan and has shaped the young man’s skill and character.

In May, Nathan decided to start up a lawn-mowing business after being unable to find any place that would hire a 14-year-old. He soon made enough money to buy equipment so he could continue working in his neighborhood.

He has a special deal for veterans: The first cut is free, and subsequent cuts are offered at a reduced rate.

“My grandfather passed in February, and I thought that maybe in his honor since I had my own business, I could cut lawns for veterans for free,” he told Fox News.

Within two weeks, his lawnmower had broken down. According to Nathan’s mom, Angel, one neighbor who worked at Lowe’s was impressed with Nathan and was able to convince Lowe’s to donate a “Cadillac of mowers” to the young man, who’s become known as “The Lawn Kid.”

And he has a new goal: He wants to mow 50 yards, free, for veterans. So far he’s finished six and has 20 more already on deck.

Many have commended Nathan for his goal, and he’s taken the opportunity to encourage others to get out and make a difference.

Angel admitted their lives are not always easy, but she’s proud of her boy.

“He is like a typical teenager, and he will bring us to the brink of insanity,” she said. “But he has a good heart and he also has ADHD and autism. He’s on the low end of the spectrum, and he doesn’t let that slow him down.”

“It makes me so very proud to see him doing something in my dad’s honor …  I think my dad is looking down on Nathan … with so much pride because my dad was a fighter and as a veteran, he taught myself, my sister and the grandkids that we should always be thankful to our veterans because they’re the reason why we get to be free and make decisions.

“There’s always a way to put good into the world when it seems like there’s so much bad going on.”

And though Frederick isn’t around to encourage Nathan anymore, Nathan has a pretty good idea of what his grandpa would say to him if he could see him now: “I think his exact words would be like ‘I’m proud of you bud.'”

Continue reading: Teen Sets Out to Mow Lawns of 50 Veterans for Free in Honor of Late Grandfather: 'He Taught Me' ...