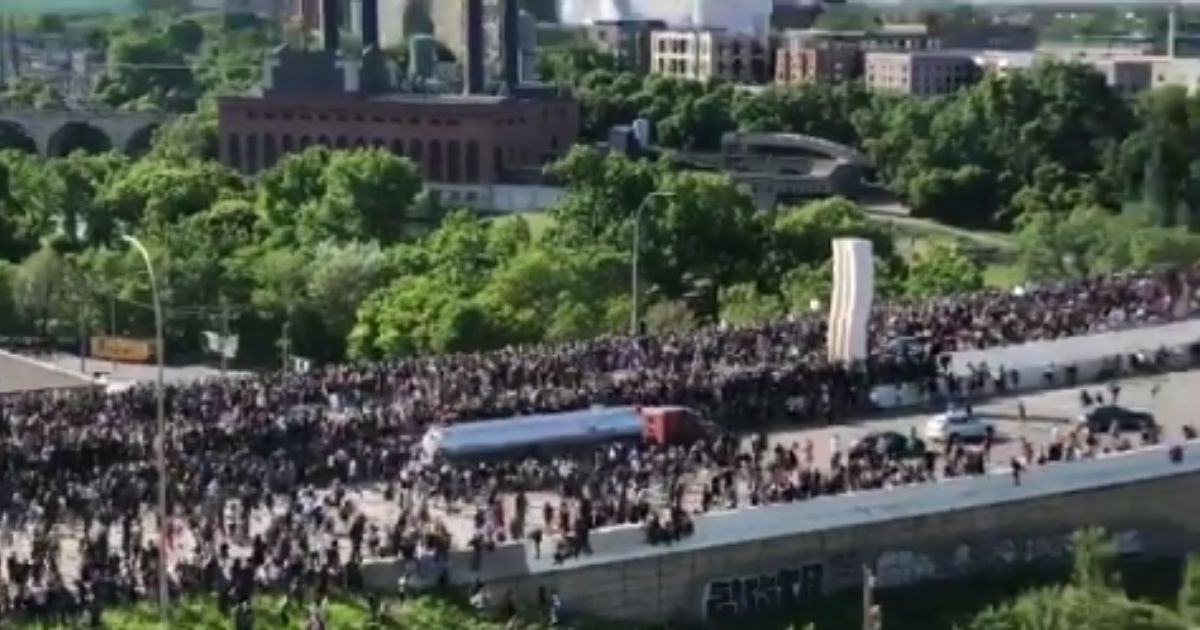 The following article, Lifechanging News as Trucker Who Nearly Hit Dozens of BLMers Before Being Attacked Will Walk Free, was first published on Flag And Cross.

A truck driver who was assaulted and then arrested last year after driving onto a crowded Minneapolis highway, which had been overtaken by a mob, will soon have his charges dropped after reaching a deal with prosecutors.

Days after the death of George Floyd in Minneapolis last May, bands of so-called “protesters” began to take over bridges and highways across the country. In the city of Floyd’s death, Black Lives Matter demonstrators were in the midst of terrorizing the city while other people were hard at work ensuring they could earn a paycheck.

On May 31, 2020, a man named Bogdan Vechirko had the audacity to use the Interstate 35W bridge to transport fuel, according to WCCO-TV.

The driver is a working man, and men who drive tankers often use such bridges. But Vechirko was met by a chaotic situation on the bridge, and he did not immediately stop his truck.

He instead attempted to navigate through the crowd while seemingly protecting himself and those who had decided to spend their afternoon playing on an interstate — and throwing objects at him.

RAW VIDEO: Jeff & Sara Radichel sent us this video of the moment a tanker truck drove through peaceful protesters on the I-35 Bridge in Minneapolis | https://t.co/OA7HXWJUrI #GeorgeFloyd pic.twitter.com/N9QetxZzXN

No one was seriously injured, while Vechirko was booked into jail with lacerations on his face. One of the bridge “protestors” spoke to Minnesota Public Radio after the incident and shared an account of the viral moment.

“We were peaceful and kneeling. Everybody was sedentary, kneeling on the ground. And that semi pummeled through the whole fricking crowd! In peaceful protest!” a woman said.

Another person on the scene told the outlet that there was talk of throwing Vechirko over the bridge and apparently to his death after he stopped.

“Charles Meyer, another witness, said people rushed at the semi and threw their bikes at the front wheels in an effort to stop the truck. The crowd then beat on the windows, men were kicking the front window in, and once they got into the cab, they ‘started beating them down,’” MPR reported. “At some point, others started yelling to throw the driver over the bridge, Meyer said.”

The driver was eventually beaten by the mob after he did stop, WCCO reported. He was also robbed of his wallet, which was not mentioned by Democratic Minnesota Gov. Tim Walz, who commented on the incident a day later.

“The motives of the driver are unknown at this time,” Walz said, according to MPR.

What were those motives? Any driver who has ever seen what happened to truck driver Reginald Denny in Los Angeles in 1992 during a riot knows not to stop for dangerous “protestors.” Denny was beaten nearly to death.

Could you imagine driving onto a highway and seeing hordes of angry people seeking a racial reckoning? Would you stop? Vechirko, you’d assume, was at least partially motived by a desire to get his job done, and to not be killed while doing it.

In a miscarriage of justice, Vechirko found himself behind bars after the crowd decided not to throw him over the bridge. He was later charged by Hennepin County Attorney Mike Freeman with felony threats of violence and gross misdemeanor criminal vehicular operation, the Minneapolis Star Tribune reported.

The Star Tribune reported Saturday that Vechirko has reached a deal with prosecutors which will see his charges dropped, so long as he adheres to a “continuance without prosecution” agreement.

If Vechirko stays out of trouble for a year, the charges will be dismissed. The Star Tribune did not report whether the driver’s wallet was ever recovered. It looks like an honest man who was attempting to do his job while the world burned around him will at least avoid being a lifelong felon if he keeps up with his end of the bargain.

Vechirko could come away from this situation with some form of relative justice in that he won’t be imprisoned, Still, actual criminals continue to roam free. If the DA’s office in Hennepin County had any interest in justice, those who bloodied and stole from the driver would be the ones facing charges.

Of course, none of his attackers were ever arrested.

Continue reading: Lifechanging News as Trucker Who Nearly Hit Dozens of BLMers Before Being Attacked Will Walk Free ...