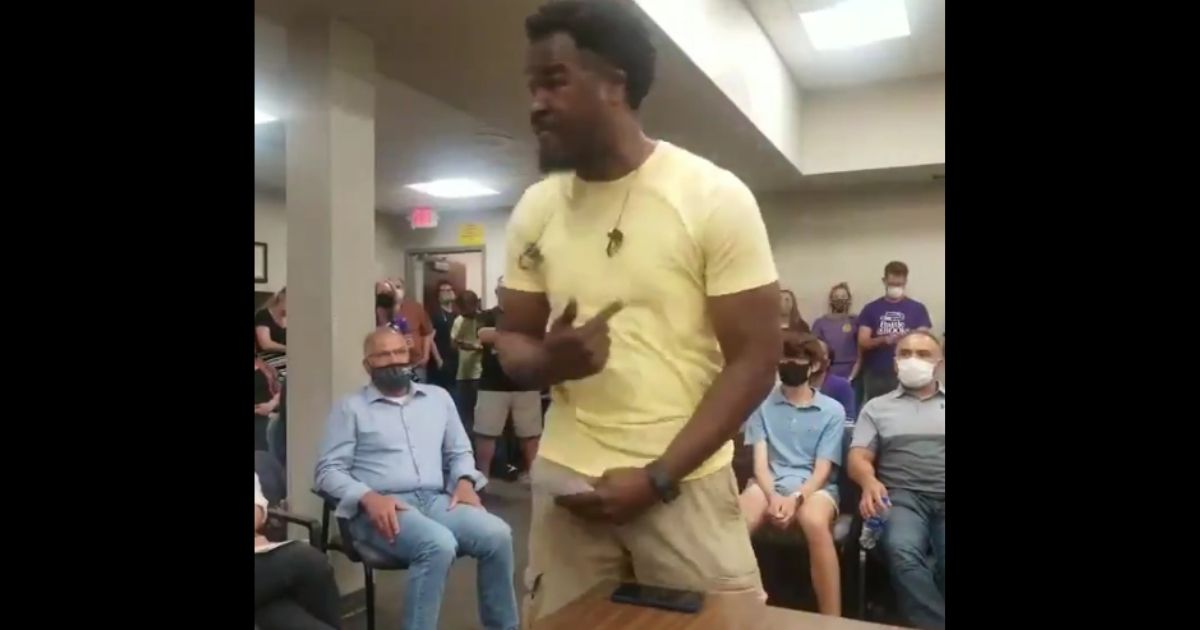 The following article, Dad Shuts Down CRT with the Perfect Question: How Do I Have Two Degrees if I'm Oppressed?, was first published on Flag And Cross.

A black man and father obliterated the left’s narrative regarding systemic racial oppression in a recent viral video when he spoke out against the teachings of critical race theory at a school board meeting.

How did the dad buck the narrative that minority Americans can’t succeed in a country supposedly bogged down by a system which is alleged to be designed to keep black and brown citizens struggling? He simply shared his own success story.

“When you talk about Critical Race Theory, [it is] pretty much going to be teaching kids how to hate each other, how to dislike each other,” a father named Ty Smith told a school board in Illinois in a video which is going viral, Faithwire reported.

“No mom, no dad in the house. Worked my way through college, sat there and hustled my butt off to get through college. You gonna tell me somebody that looked like y’all white folks kept me from doing that?” he asked. “I worked myself off the streets to where I am right now and you’re going to sit here and tell me this lie of Critical Race Theory?”

“How do I have two medical degrees if I’m sitting here oppressed?” pic.twitter.com/gmCRJaphXt

“It’s pretty much what its all gonna come down to. You’re going to deliberately teach kids, ‘This white kid right here got it better than you because he’s white,’ and you’re gonna tell a white kid ‘the black people are all down and suppressed.”

He then asked, “How do I have two medical degrees if I’m sitting here oppressed?”

Smith asked a question that surely had leftists struggling for an answer. It’s of course, difficult to argue with his logic.

How does one obtain an education, and go on to achieve success, when that person isn’t supposed to live outside the confines set for them by the modern left? Smith told his very personal story, and it is one that people need to hear.

After growing up with no parents, he worked his way through college, and did what was required to meet his objectives.

“You gonna tell me somebody that looked like y’all white folks kept me from doing that? Are you serious? Not one white person ever came to me and said ‘Well, son, you know you’ll never be able to get anywhere because the black people,’” he said.

Smith also succinctly broke down the lies that sit behind the teachings of critical race theory, noting: “Well how did I get where I am right now if some white man kept me down?”

The dad concluded by lambasting people who invoke the words of Dr. Martin Luther King Jr. while advocating for anti-white teaching materials, reminding them that the teachings of critical race theory harm children and sew divisiveness — which was not the message shared by King.

“When February comes around, don’t talk about Martin Luther King. Don’t talk about Black History Month if you’re pretty much going to pee on his grave with this nonsense.”

It’s a shame more minority fathers aren’t speaking up on this subject, but Smith’s passion shows us that we are still a country of individuals, and that race baiters in education, business and in the military do not speak for all minority Americans. This writer grew up in Oklahoma’s Indian country in northeastern Oklahoma — roughly 20 miles from a place called Stillwell, Oklahoma.

The community in 2018 was noted for being the early death capital of the country, The Washington Post reported. Residents in Stillwell are either American Indian, or are neighbors to them. The Post reported people in the area die at an average of 56.3 years old — much lower than the national average.

Why is that? Is it because Christopher Columbus visited this continent centuries ago and put the area on the map for colonization? Is it because they’re likely to be poor?

I would posit that so many people die young in deep Indian country because they have no hope. They’re in so many cases brought up to be devoid of ambition, or to live lives without meaning. That’s tragic.

According to the logic of the left, Native Americans — a much smaller minority than black Americans — should all be oppressed in perpetuity. If black America is struggling to succeed to such a degree, then Indians must be facing oppression so stout that it is insurmountable.

Thankfully, the rhetoric of the left is built on lies. Such a conclusion is simply not true.

Indian tribes, such as my own tribe in Oklahoma, are socialist nations within an already great nation. Indian tribes have been teaching children for decades that they’re oppressed. Some of us who are members of those tribes thankfully had adults in our lives while growing up who wouldn’t allow such propaganda to be digested. These people were inclined to literally smack us for daring to indulge in self-pity.

We thrived where the left said we had no business going off the liberal thought reservation.

Ty Smith, a back man with a college education, succeeded where the left said he should have found himself poor, addicted to drugs or being targeted by the police. Where is the left’s answer for Mr. Smith’s question?

If Smith were truly oppressed, it would certainly benefit all of America to find out how he leaped from being desolate to college-educated.

The only way to defeat these race fanatics is to speak up and to defy them by living lives seeking excellence.

Thank goodness that more people are finally starting to stand up to the nonsense.

In today’s age of lunacy, we should all be thankful for fathers like Ty Smith.

Continue reading: Dad Shuts Down CRT with the Perfect Question: How Do I Have Two Degrees if I'm Oppressed? ...