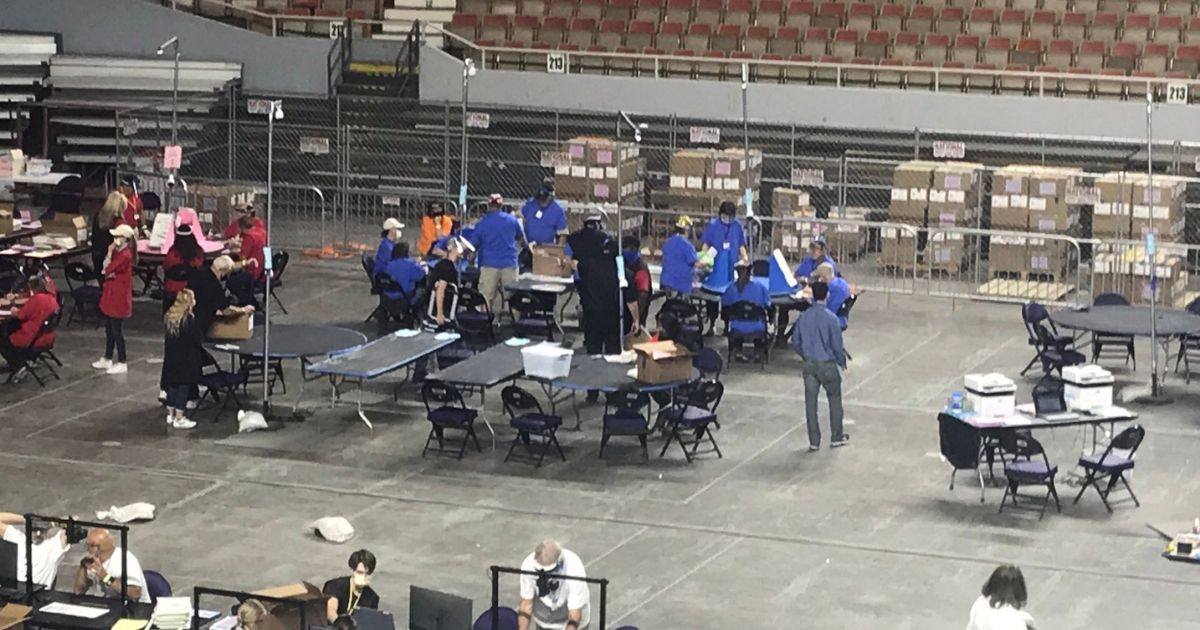 The following article, AZ Audit Reviewing Thousands of Ballots Where Machines Did Not Detect a Single Vote for President, Audit Liaison Says, was first published on Flag And Cross.

Ken Bennett, Senate liaison to the Maricopa County, Arizona, election audit, stated on Friday there are more than 33,000 ballots from November’s election where voters made no selection for president, or at least no votes that were detected by the voting machines.

“There were over 33,000 undervotes,” Bennett told The Western Journal. “There may be, you know, a certain number of people that didn’t want to vote for [Democrat Joe] Biden or [Republican Donald] Trump or [Libertarian Jo] Jorgensen or anyone else, so they may, in fact, be undervotes.”

“But if someone circled their oval or made a check next to it or did something other than get pixels of blackness inside the oval, almost one percent of the 3.4 million people that voted in Arizona, the machines did not record any vote for president,” he added.

Bennett, who served as Arizona’s secretary of state from 2009 to 2015 after a stint as the state’s senate president, said the hand count of all Maricopa County’s 2.1 million ballots, which was completed this week, included reviewing the undervote ballots.

According to the Maricopa County recorder’s office, the number of undervotes in November’s election was 8,475 within its jurisdiction.

Maricopa County, which encompasses the Phoenix metropolitan area, makes up over 60 percent of the state’s population, but apparently only accounted for about 25 percent of the over 33,000 undervote ballots.

Bennett noted just how narrow Biden’s win over Trump was in Arizona: Just 0.3 percent, or approximately 10,500 votes, made the difference.

Maricopa County was the only county in the state to flip from red to blue from 2016 to 2020.

To better illustrate just how close the race was, Bennett offered the example of a shire in medieval England which were originally broken up into communities of approximately 1,000. Many counties in England today still bear the name shire: Yorkshire, Herefordshire, Oxfordshire, etc.

If Arizona were a shire, and 80 percent of the citizens voted, as happened in November’s contest, that would be 800 people, and the final election result would have been 401 for Biden to 399 for Trump, he said.

However, if there were an additional one percent of ballots cast, eight votes bringing it to the total of 808, but only 800 were counted, that raises some questions, especially for the losing side.

“So that’s exactly like the actual election in Arizona,” Bennett said.”You got 3.4 ballots, but the machines only read a little bit less than that and votes. So if you were either the winner or especially the loser in a race that was decided by two out of 800 votes, I think one of the first things you’d want to do is make sure that every one of those one percent of the ballots” was reviewed.

“I mean, this is a race that was decided by three tenths of one percent. And so you would probably want to make sure that the election department had done a perfect job seeing if all the votes were counted, especially when one percent of the ballots supposedly weren’t counted for any ballot for president by the machines.”

Bennett said the audit team’s first order of business has been confirming through a hand count that the overall tally in Maricopa County matches what the Dominion Voting Systems machines recorded.

“But when you’ve got a race that was essentially, not essentially, it was literally as far as the percentage, two out of 800 is the same exact percentage as the margin of victory, which was 10,000 to 3.4 million,” it deserves close scrutiny, he argued.

“To me whenever I have shared the shire story…everyone who’s heard that says, ‘Oh, now it makes it perfectly clear why we’re doing an audit. We’ve got a race that was decided by two out of 800 votes,” Bennett said.

With the hand count finished, the audit’s attention has shifted to completing an examination of the ballots themselves for abnormalities using high-resolution cameras that allow a microscopic review.

Some of the issues auditors are looking at include the authenticity of the paper itself and whether the ovals were filled in by hand or machine, Bennett explained. They will also look to see whether the ballots were printed, as the official ones are, or photocopied.

Additionally, official ballots all have alignment marks on the front and back that should match up.

And 5 teams of two people each sorting ballots in some way. Not sure what they are doing there. pic.twitter.com/RGVDojUlp7

Further, approximately 1.9 million voters in Maricopa County received their ballots in the mail, so that number should all have fold lines.

Asked, if he could say whether the hand count has yielded a number that more or less jibes with the official November count in Maricopa County, Bennett answered he could not yet.

“We can’t say, because we are now going through the very meticulous process of double and triple-checking every tally sheet that’s been counted over the last two months,” he said, but added the spreadsheets with those numbers will all be made public.

He anticipates that the paper evaluation will be completed by the end of the month.

At our current rate of examining over 100k ballots per day, we will complete the paper examination phase of the audit by Saturday, June 26.

“So I think we’ve got a few to several weeks of work on other aspects of the audit that the two that have been working on here, that the subcontractor that’s looking at the machines and all of the data that was downloaded from the machines and the hard drives are still looking at all of that,” Bennett said.

He believes a report of the findings may be out as early as the end of July, but could be as late as Labor Day.

“I think Arizona wins either way,” Bennett contended. “If we find that the election was run very smoothly and complied with all of the rules and requirements in state law, then good for Arizona. We win. But if we find other things that are weaknesses and need to be improved before the next election in 2022 or the presidential in 2024, then we get those things fixed, and we win there too.”