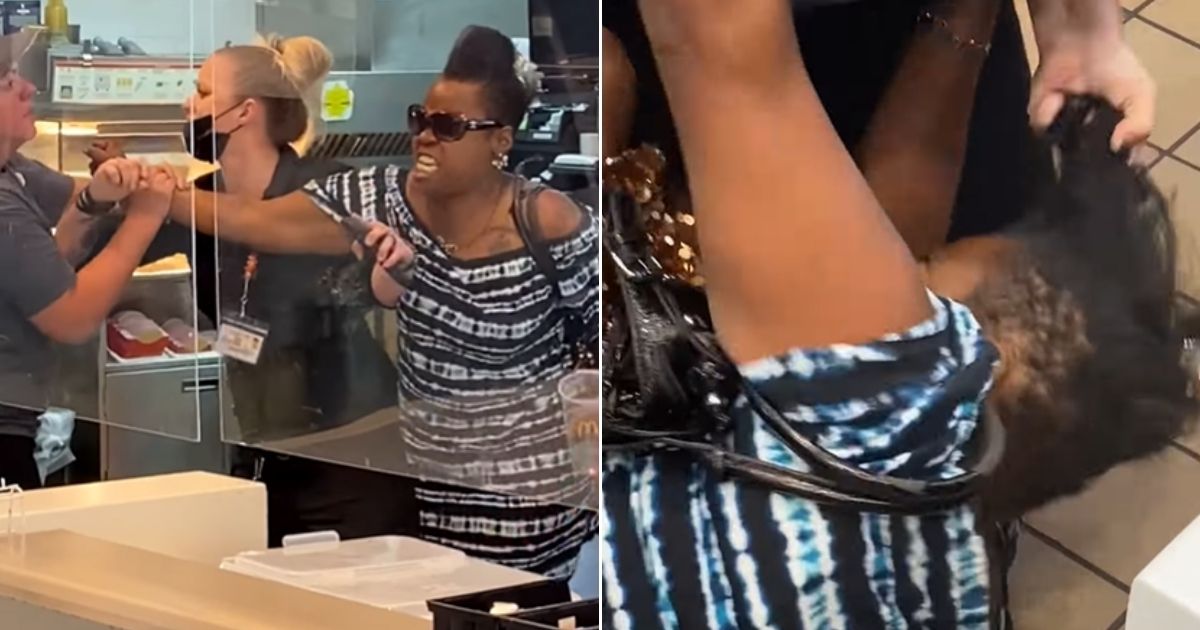 The following article, Entitled Woman Assaults McDonald's Employees for Refusing Her Special Request, But Watch Them Fight Back, was first published on Flag And Cross.

An Ohio woman has been charged with two counts of misdemeanor assault after her attacks on two female McDonald’s employees were caught on video.

Cherysse Cleveland, 44, was arrested at a McDonald’s restaurant in Ravenna, Ohio, on Monday morning after she was captured on video punching the store manager and another worker amid frustration that she wasn’t allowed to mix flavors of her slushie, according to police.

Brian Allen, the customer who filmed the video, told WOIO-TV on Tuesday that he began filming the argument on his cellphone once it started escalating.

“I was concerned that she may start hurting somebody. So, I started recording in case law enforcement needed the tape for any kind of evidence of the assault,” he explained.

Allen shared the shocking video on Facebook, where it quickly went viral.

According to Allen, the brawl started because of a disagreement over a McDonald’s slushie.

“I heard her ask for a slushie with all three flavors mixed into one,” he told WOIO. “Whereupon the manager informed her that they could not do that, and she became increasingly irritated and combative and decided that she would go behind the counter and fix her own drink.”

During the harrowing incident, the woman identified as Cleveland walked behind the counter to argue with the McDonald’s worker who was taking her order.

The employee was heard repeatedly warning the suspect, “Do not touch me.”

The store manager tried to de-escalate the situation by stepping between her employee and the woman, who reacted by slugging her in her left jaw.

Astonishingly, the manager stayed calm and simply ordered her to leave the store.

The woman identified as Cleveland yelled back and told the manager that she should get out.

She then walked over to the beverage station to fill a cup with ice.

Afterward, the woman walked back behind the counter again and threw the cup of ice at the employee with whom she had argued earlier and began hitting her.

The worker then pushed the woman down to the ground, pummeled her and yanked her wig.

Police arrived and arrested her. To her credit, the woman did not resist arrest, which meant she missed out on the chance to become the left’s latest anti-police icon.

Cleveland was released from jail on Wednesday after pleading not guilty the previous day.

Her demeanor in court was a stark contrast to the hostile attitude she had displayed during her McDonald’s scuffle.

The judge ordered Cleveland not to return to that McDonald’s location and to not have any contact with the employees she had fought.

The customer/witness who filmed the incident praised the McDonald’s employees for their incredible restraint.

“If I was in their shoes, I wouldn’t have been able to show the restraint they did,” Allen told WOIO. “You can see from the video that several times, not just once, she physically assaults and or pushes them. And they don’t do anything except for to try to protect themselves. And you can clearly hear the one employee trying to protect her boss as well. I think they both did outstanding jobs.”

Allen said it’s a shame that minor disagreements over something small escalate so quickly these days.

“I don’t see anybody having to take abuse like that,” he said. “I think the lesson is just to treat people the way that we want to be treated, and I don’t see that a lot in the world anymore.”

NYC: 82-year-old man assaulted and robbed of his cane at Manhattan bodega—suspect at large pic.twitter.com/ol585PC4rb

Sadly, this incident is illustrative of the powder keg we live in today. People coming to blows over an inconsequential matter like a slushie is not the society we should aspire to or condone.

Unfortunately, these events are becoming increasingly common, and we’re becoming desensitized to senseless violence and cruelty every day.