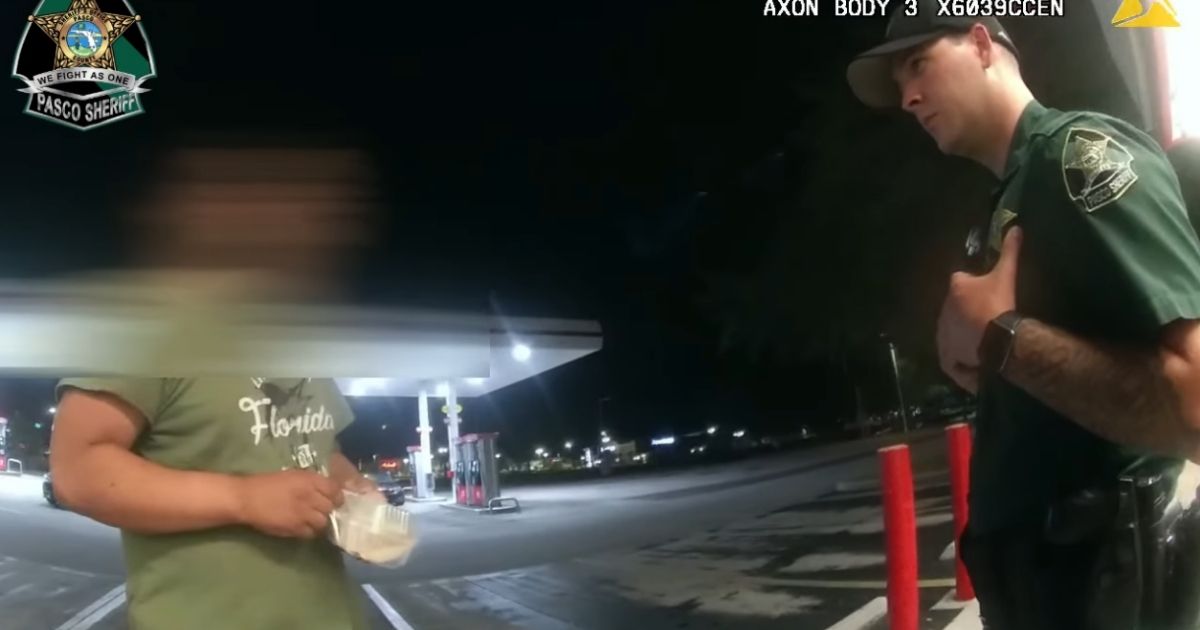 The following article, Sheriff's Deputies Caught on Camera Buying Shoes and Sandwich for Man Loitering Behind Gas Station, was first published on Flag And Cross.

On June 13, a call came into the Pasco County Sheriff’s Office in Florida regarding a man who was wandering around near a gas station in the Trinity area.

While deputies could have responded and shooed the man away, they gave him a helping hand instead.

Barefoot and hungry, the man seemed a bit dazed in the bodycam footage that has been released.

“The original call was for someone who was loitering behind the gas station,” Amanda Hunter, public information manager for the sheriff’s office, told Fox News. “But in talking with the subject they noticed he was not wearing any shoes.”

“You ain’t got shoes, my dude?” one of the deputies can be heard saying in the video shared by the Pasco Sheriff’s Office on Facebook.

A short while later, a deputy brought over a Walmart bag and took out a pair of size 13 flip-flops, removing the wrapping and tossing them down on the ground for the man to put on.

After getting the man situated footwear-wise, they asked him if he was hungry. He said yes, so they went into the gas station convenience store and bought him a sandwich.

“Last night, PSO deputies responded to a report of an individual loitering behind a gas station in the Trinity area,” the post said. “While speaking with the individual, deputies realized he wasn’t wearing shoes.

“Deputies then decided to buy a pair of flip flops for the individual from a nearby store. The deputies also worked with the gas station to get a sandwich for him. Another citizen saw these actions and thanked the deputies.

“We are proud to serve our community and this is a true example of #WeFightAsOne to help those in need in our community.”

At the end of the video, when the man came up and thanked the deputies, one responded, “Can’t let a human being walk around with no shoes.”

The video has since been shared hundreds of times, and many have commented their thankfulness to the two deputies. Others have commented to say that this is how the law enforcement officers in their lives have acted, despite the bad apples that end up getting a lot of attention.

Hunter echoed that sentiment, highlighting the fact that Pasco’s deputies are good people who got into that line of work because they wanted to make a difference.

“This is not an uncommon story for deputies,” she said. “It’s not one we really talk about enough, but this is very common for the Pasco sheriff’s office. We serve all citizens no matter their conditions or anything like that.

“The deputy mentioned in the video, ‘No human being should go without shoes.’ It was just a no-brainer. The deputy saw this person with no shoes and didn’t even think twice about heading to the store to grab him some.

“That’s us fighting together with the community to make a better Pasco. I can’t speak for every law enforcement officer across the country, but I can tell you that an overwhelming majority of our people are in this job to help people. Whether that be on a call for service in a domestic violence situation or as you see in this video just helping someone out with a quick meal and some shoes.

“Deputies at our agency get involved in this career because they have a deep desire to help people.”