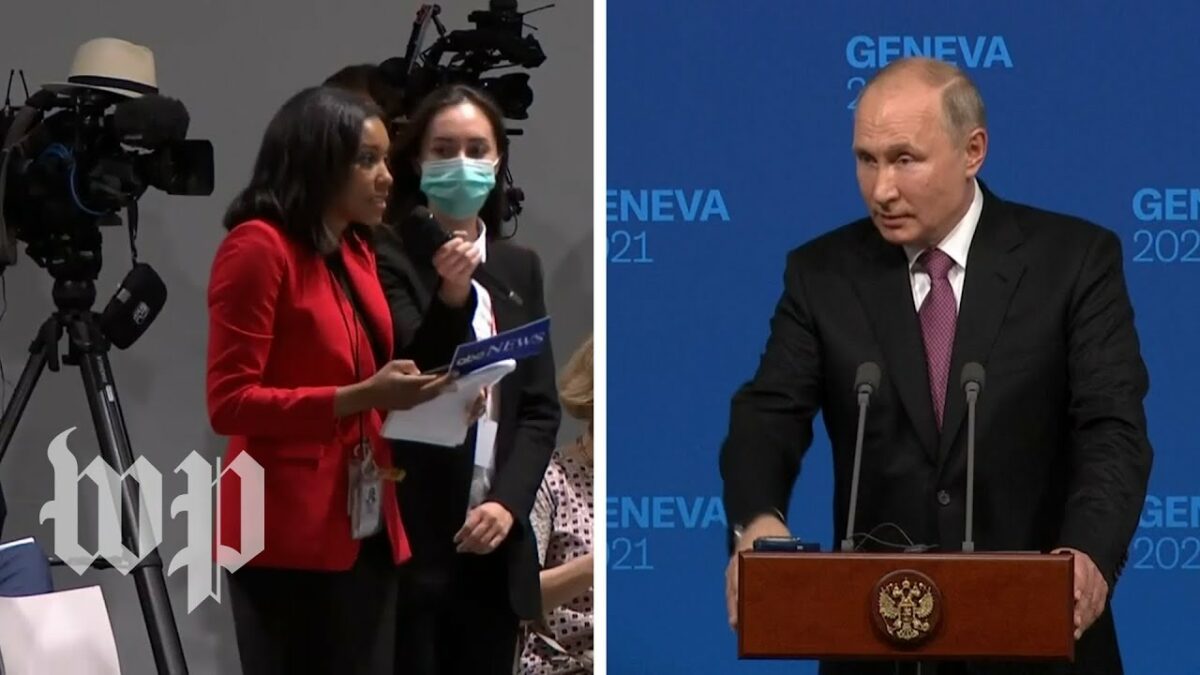 The following article, Putin Rips Detention of Jan. 6 Protesters, Accuses US Government of Assassinating Ashli Babbitt, was first published on Flag And Cross.

There are many questions that still linger about the incursion into the U.S. Capitol on Jan. 6, but the only one asking them publicly is Russian President Vladimir Putin — and that’s a problem.

Putin met with U.S. President Joe Biden Wednesday in Geneva in a much-anticipated face-off between the two world leaders.

The Russian president was asked about his reputation for silencing political dissidents during a media event for the summit.

Although his answer was clearly an attempt to deflect from his government’s own actions, Putin raised questions that have been on the minds and lips of so many in the U.S. — but only on the political right.

“What are you so afraid of?” ABC News’ Rachel Scott asked Putin about why so many of his political opponents end up dead or poisoned like Alexei Navalny.

Rather than answer the question posed to him, Putin indicted America for the “looting and violations and riots” from the Black Lives Matter movement after the death of George Floyd in Minneapolis Police custody last year, though he didn’t mention Floyd by name.

“We sympathize with the Americans, but we do not want for the same thing to happen on the Russian soil, and we’ll do anything possible to prevent this,” Putin explained through a translator.

But it was when Scott pressed him further that Putin made a surprisingly salient point about the aftermath of the incursion into the U.S. Capitol building on Jan. 6 and the death of Ashli Babbitt, who was shot by a Capitol Police officer who officials are still reluctant to publicly name.

“People went into U.S. Congress with political demands,” Putin replied, pivoting to talking about what brought the crowd to the building that day and eventually into the building.

“Four hundred people are now facing criminal charges,” he continued. “They are facing prison terms of up to 20, maybe 25 years. They are called home-grown terrorists. They are being accused of many other things,” he said.

It’s true that the FBI is still doggedly pursuing anyone who entered the Capitol that day and has already charged hundreds who have been tracked down and linked to the unrest.

Meanwhile, there was no such undertaking for the thousands of rioters involved in Black Lives Matter protests despite their actions causing considerably more damage across the nation.

Putin went on to speak about what happened to Babbitt, referencing her only by the circumstances surrounding her death.

“One of the participants, a woman, was shot dead on the spot,” he said. “She was not threatening with arms or anything.

“Why am I bringing this up? Many people are facing the same things as we do, and I am stressing this — we are sympathizing with the United States, but we do not want the same thing repeating here.”

“Did you order the assassination of the woman who walked into the Congress and who was shot and killed by a policeman?” Putin said to dodge questions about his government’s own sinister conduct.

Although the Russian president was obviously trying to take the heat off of himself, the questions he raised are important but haven’t made their way to the mainstream discourse.

The disparate treatment the government gave to BLM rioters compared to the people who breached the U.S. Capitol is blatantly obvious, but nobody in government or the establishment media have attempted to reconcile or even excuse it — instead, they pretend the bias simply doesn’t exist.

Furthermore, the circumstances surrounding Babbitt’s death are still largely unknown despite the fact that other police shootings in the U.S. are front-page news the instant they happen, often naming the officer involved as well.

These are issues that need to be publicly sorted out by competent leadership in the nation, which the U.S. is currently deficient in with Biden at the helm.

It’s a problem that one of America’s adversaries is making a more sober assessment of what’s happening than the country’s own president.

But Biden’s lack of leadership or objectivity was apparent in his rebuttal to Putin’s assessment when he doubled down on the false narratives of the day, demonstrating that the Russian president has a better handle on events than Biden.

“I think that’s a ridiculous comparison,” Biden said in a news conference the same day Putin made his remarks about the events, according to Fox News.

“It’s one thing for literally criminals to break through … go into the Capitol, kill a police officer and be held accountable,” he said, still peddling the narrative that Capitol Police Officer Brian Sicknick was killed that day despite evidence that he died of natural causes.

As long as the government continues to unfairly apply the laws against civil unrest, and as long as the details of Babbitt’s last moments remain shrouded in mystery, America will remain deeply and irreparably divided.

It’s not that Putin has done anything admirable here, but it’s telling when Biden is not speaking the truth and the Russian president is.

Mr putin has a point, but don’t anyone hold their breath waiting for anything on that death, was a white death.