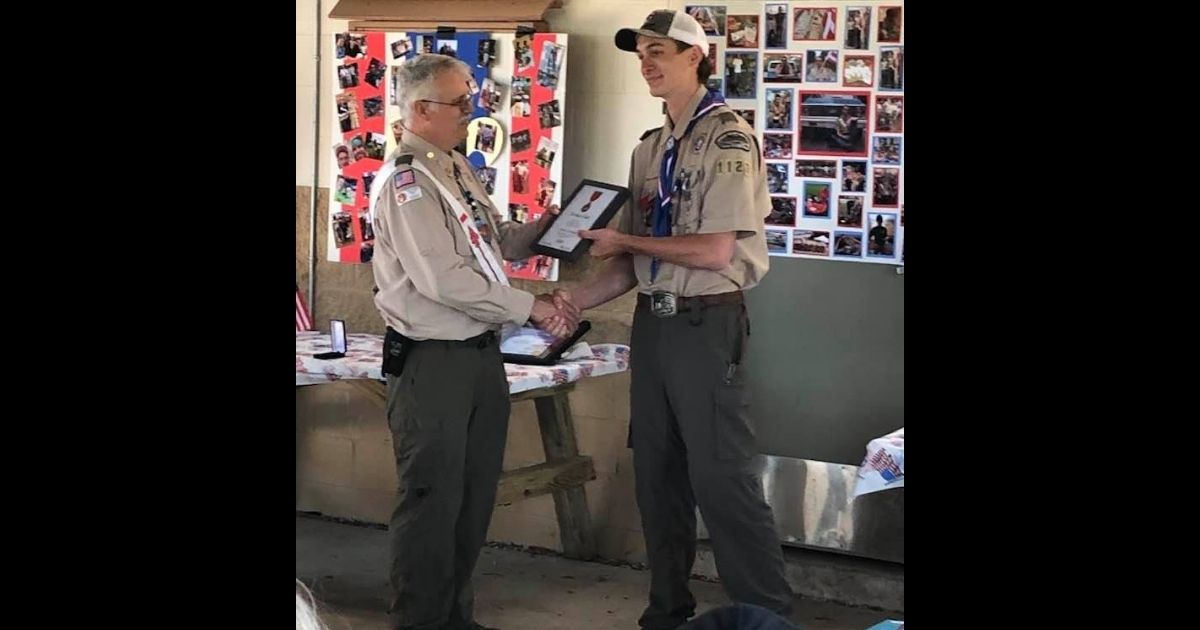 The following article, Eagle Scout Honored After Lifting Trapped Woman out of Car Before It Burst Into Flames, was first published on Flag And Cross.

Back in 2018, Mychal VanAllsburg of Michigan was starting a new job at Enterprise Door LLC. During his first day on the job, he heard a terrible sound outside on the street.

“I heard the crash … and just started kind of running towards the noise,” VanAllsburg told Fox News.

When he got outside, he saw one of the vehicles involved, a truck, had rolled over a curb. The driver eventually got out.

But it was the other car that caught VanAllsburg’s attention: It was a “four-door car sitting in the middle of the street all beat up and mangled,” he said.

Instead of filming, calling for backup or freezing in a panic, the Eagle Scout drew on his training to act quickly and carefully.

“I ran straight to the car trying to assess the damage as I’m running up to it and assess the danger,” he said. “In Scouts, they teach you … if you don’t have to move the person, don’t move them.”

“I looked towards the engine because I started smelling smoke and like electrical wires burning … it was coming from the engine bay. And so I was like, ‘OK, well, we have to get this lady out this car is going to catch on fire.'”

VanAllsburg recalled hearing the woman calling for help and reassuring her that he’d stay with her. A coworker joined him and together the two of them worked to bend the doorframe, lift the steering wheel and free the female driver.

“By that time my co-worker had come running over to help me and the both of us bent the doorframe down to gain access into the vehicle,” the Scout said.

They managed to move the woman, Jodie Matthews, just in time.

“A couple of seconds later, the entire cab or the cockpit of the vehicle was engulfed in flames,” VanAllsburg continued, saying the car was just 10 feet away when it erupted in flames.

The woman survived, and on June 5, the Boy Scouts of America honored VanAllsburg’s rescue with a Heroism Award. The biggest surprise of all, though, was that Matthews attended, too.

It was the first time VanAllsburg had seen her face to face since that fateful day.

“Today was a great moment when Mychal was able to meet the woman that he pulled from the car,” VanAllsburg’s mother, Nikki Ciptak, posted on Facebook. “The heroism award was nice, but knowing she is doing well was a great award as well for a job well done. #proudmom.”

“Pictures from Mychals heroism ceremony today,” Ciptak continued in another post. “Had a special surprise in that the young lady he pulled from the crashed and burning car showed up full of emotion for getting the chance to meet her ‘angel’.

“Cant say enough for all the people that made this event possible, from the ones who followed the red tape to get the award processed, gathered supplies, helped set up the pavilion,making sure important people had rides to the ceremony to cleaning up after. Thank you to all of you for being our ‘village’.”

The young man doesn’t see himself as a hero, but as someone who was simply in a place to help someone else.

Continue reading: Eagle Scout Honored After Lifting Trapped Woman out of Car Before It Burst Into Flames ...