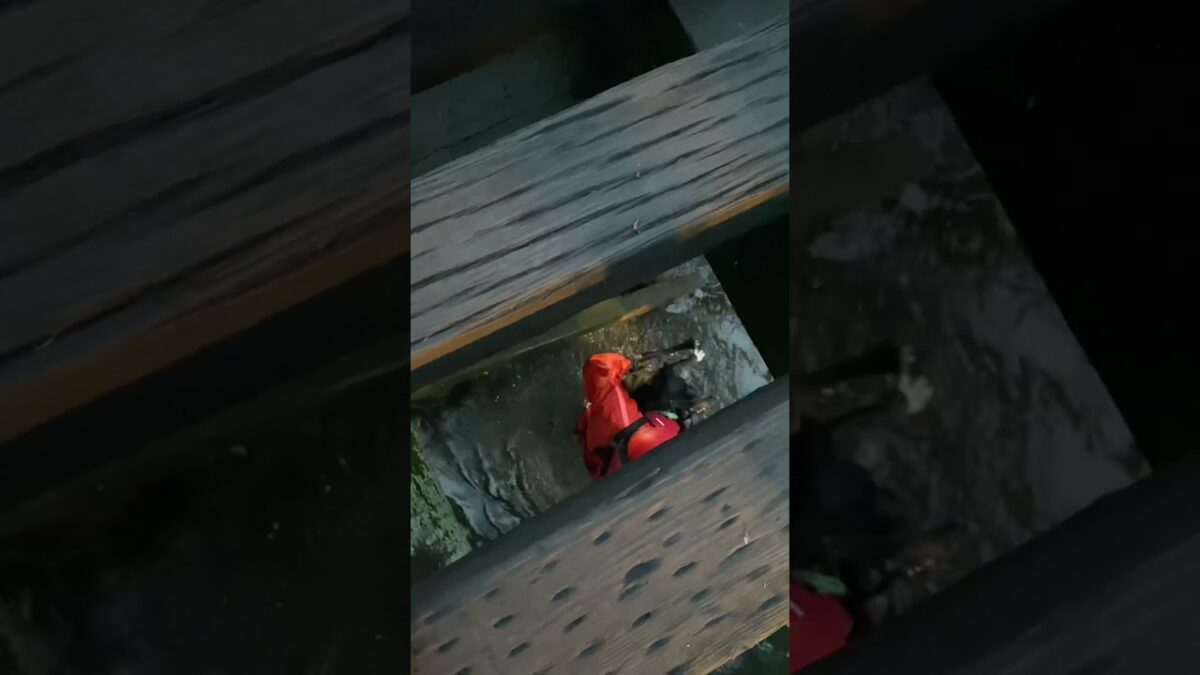 The following article, Citizens Immediately Call in First Responders Upon Noticing Dog Stuck Underneath Canal Bridge, was first published on Flag And Cross.

Lucas Kledzinski and Riley Swanson of Lebanon, Oregon, were out for an evening stroll on Sunday night when they spied a pup in a predicament.

The medium-sized, black-and-white, mixed-breed dog was stranded in the canal, standing on a piling support for the railroad trestle that ran above it. The two passers-by quickly realized they wouldn’t be able to reach the dog themselves, so they called the Lebanon Police Department.

At around 8:16 p.m., the police department then called the fire department, and they arrived on the scene and formed a plan of attack.

“Firefighters arrived shortly after and determined that personnel would need to enter the water to rescue the dog, who appeared to have an injured front leg,” the Lebanon Fire District Facebook page posted on Sunday.

“A rescue unit was dispatched so that firefighters could don protective dry suits, personal flotation devices, and helmets before entering the water. Two additional firefighters were staged on the canal bank beneath the Park Street bridge to act as downstream safeties in the event that a rescuer was carried downstream.

“Lieutenant Michael Maynard and Engineer Corey Knipstein crossed the canal to reach the dog, who was cold and wet, but friendly,” the department added.

“Maynard and Knipstein secured the dog with a webbing strap around its chest in the event that it broke free from their arms, and the dog was carried back to the shore and to a waiting Lebanon Police patrol car where it was scanned for a microchip (it did not have one) and transported to the River’s Edge Pet Medical Center for an evaluation.”

All in all, the rescue took about 45 minutes total, and the dog was safely brought out of the canal.

Authorities commended the two good Samaritans for contacting them and not trying to rescue the dog themselves, which could have led to more rescues and even tragedy.

The fire department also took the opportunity to strongly suggest that people get their dogs microchipped if they haven’t already.

On Monday, the owners were able to pick up their dog, which the fire department revealed in a “pupdate.”

“We have received word that the dog was picked up by his owners from the vet’s office this afternoon,” they wrote.

“It sounds like they may have seen this post on social media, so a big thank you to all of our community members who shared this post and helped reunite this dog with his family!”