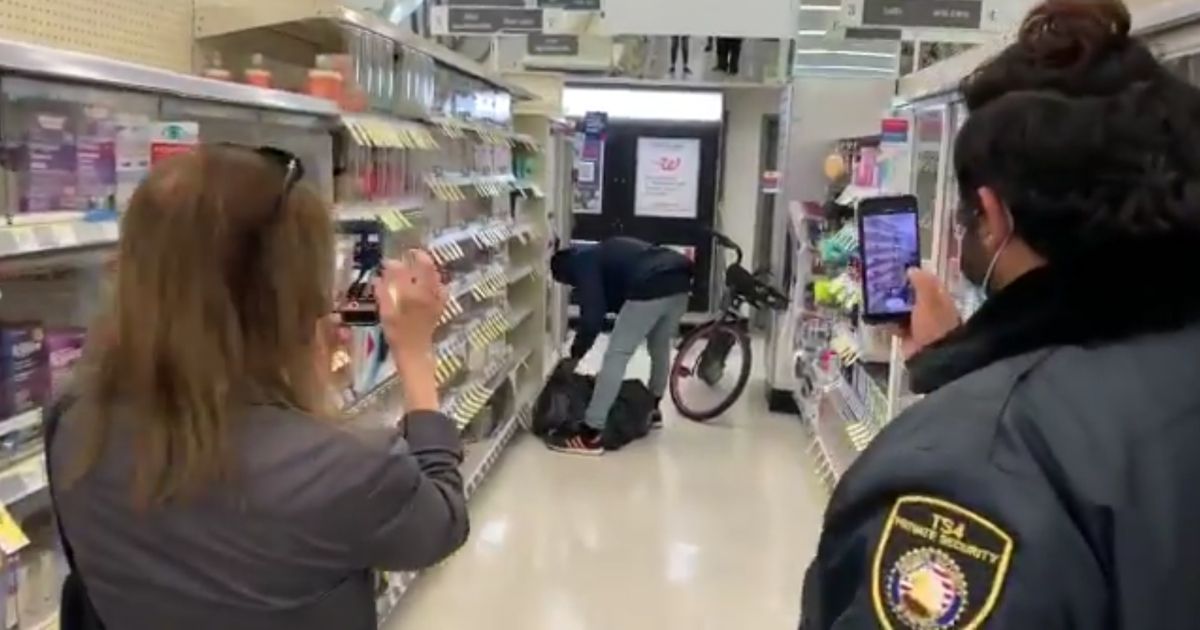 The following article, Security Guard, Workers Stand By as Man Shoplifts from Walgreens in San Francisco, was first published on Flag And Cross.

A viral video of a man shoplifting from a San Francisco Walgreens this week is a perfect example of what happens when “wokeness” goes wrong.

Thanks to a 2014 referendum which essentially makes paying for retail goods in California optional, thefts are out of control and stores are struggling. San Francisco is particularly wrestling with the fallout of the pandemic.

The city alone has lost 17 Walgreens locations in the last five years to permanent closure. Where does that leave elderly residents when it comes time to fill prescriptions?

San Francisco’s leaders don’t care. They’ve made it a free for all for crooks, so long as one steals under $950 worth of goods.

That’s not hard to do at Walgreens, as is evident from a video taken Monday of a man who, unopposed by both employees and other shoppers, took what he wanted and left at the location on Gough and Fell Streets in the city.

KGO-TV reporter Lyanne Melendez shared a video she took of the brazen daytime shoplifting spree in which the man rode a bicycle inside the store, lined a trash bag with whatever he wanted and then rode away. The store’s security officer made a haphazard attempt to grab the bag, but the perp, a black male, left with what he wanted without fear of consequences.

This just happened at the @Walgreens on Gough & Fell Streets in San Francisco. #NoConsequences @chesaboudin pic.twitter.com/uSbnTQQk4J

Melendez described the brazen theft she witnessed during an interview with KGO-TV.

“It’s hard for me as a journalist to say ‘I won’t be involved, I can’t get involved,’ I have to be sort of neutral, but this is also my city,” she said. “I live in this city and I see this constantly. Not only Walgreens, but cars, and my garage door has been broken into twice.”

“At what point do we say enough is enough, we want our city back?” she asked.

To answer Melendez’s question, San Franciscans would get their city back if they’d stop voting for insane Democrats who are soft on crime. California, through 2014’s Proposition 47, essentially incentivized this kind of theft. But prosecutors in San Francisco tend to not go near cases involving shoplifting.

People aren’t even afraid of jail, as the threat of being punished for stealing in broad daylight is so minuscule.

When a city begins coddling criminals, this is the sort of culture it creates. Will Walgreens and other retailers make a statement and leave the city? You certainly couldn’t blame them if they did.

CVS has actually had to tell its employees to leave thieves alone due to the threat of violence, while one man with the drug store chain had harsh words for the Bay City. Brendan Dugan, the director of Organized Retail Crime & Corporate Investigations at CVS Health, told The New York Times about the rampant theft, communicating to the outlet that the city is a terrible place to do business.

Dugan said that even security guards are “assaulted on a pretty regular basis” in San Francisco.

Stores leaving the market is a more likely probability than the city’s voters deciding to elect sane people to represent them at city hall. A great many San Franciscans would probably rather find themselves without prescription drugs and without convenient shopping opportunities than to ever vote for sensible people.

These are voters who, like most others in California’s population centers, would overwhelmingly vote for COVID if it were running as a Democrat, and against freedom.

The city is currently living through the nightmare it voted for, and the situation stinks more than San Francisco’s soiled streets and sidewalks.