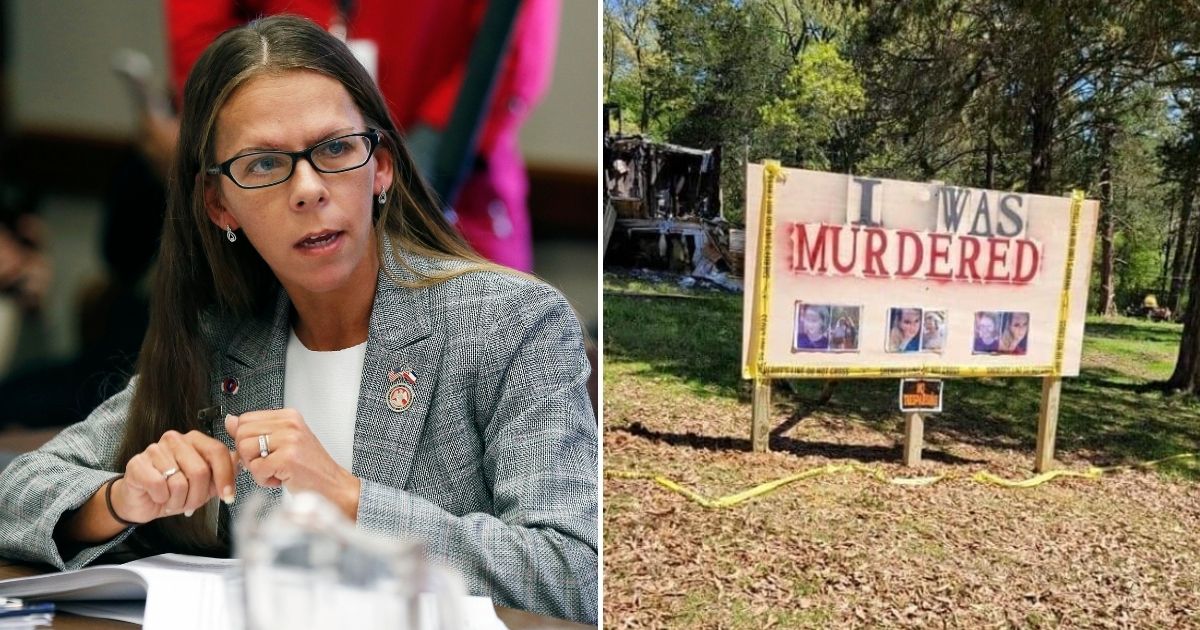 The following article, Former State GOP Rep Shot Dead at Same Site She Claimed Her Sister-in-Law Was Murdered, was first published on Flag And Cross.

A former Mississippi state House representative was found dead on Sunday from an apparent gunshot wound at the same residence where her sister-in-law mysteriously died just last December.

Former GOP Rep. Ashley Henley, 40, served in the Mississippi state House from 2016 until 2019 after a career as a school teacher.

On Sunday evening, she was found dead from a reported gunshot wound in rural Yalobusha County, according to WJTV-TV. The coroner said her body was discovered at around 10 p.m. outside of a mobile home in the community of Water Valley.

Ashley Henley leaves behind a teen son and a husband who has a lot of questions after his own sister was found dead at the same home after the holidays. Brandon Henley spoke to WJTV about his wife’s sudden death and about the apparent connection between her passing and his sister’s mysterious death.

Brandon Henley said that his sister died in the dwelling following a suspicious fire after Christmas.

Police said that Kristina Michelle Jones was found dead on Dec. 26 following a fire that was later ruled intentional.

When outside of that same trailer on Sunday, Ashley Henley was shot in the back of the head at around 2 p.m., her husband said. He had last seen her at around 11 a.m.

Brandon Henley said he became concerned that day when he was unable to contact his wife. By 8 p.m., he had not heard from her so the husband said he sent a neighbor who lived in that area to go make sure nothing was amiss. According to Brandon Henley, police discovered his wife’s body. The investigators who located Ashley Henley haven’t confirmed her cause of death yet.

“They pulled up, they saw my truck and she was nowhere to be found,” he said.

But Brandon Henley thinks the deaths are both homicides that were committed by the same individual.

“I feel that if something would have been done sooner this would have never happened,” the husband said, noting that in recent days, the family was looking at the circumstances of Jones’ death.

“The fire investigators did confirm it was arson and the crime lab did confirm that there was no smoke in her lungs when she was found, so she was dead before the fire,” he told WJTV.

Police have not commented on the investigation, but Brandon shared his thoughts on the recent loss of the two women in his life.

“I have my own theory and the police do too and he is a suspect and there was someone taken in for questioning apparently last night,” he said. “I’d like for them to do their job because this is the second person someone down there has taken from me. My son doesn’t have a mother.”

A GoFundMe account that described the late lawmaker as having been a loving mother and wife has been set up to pay for her final expenses.

“Ashley was an accomplished teacher who served many children over the almost two decades teaching in the Desoto County School system, as well as serving as a professor to many students at Northwest Mississippi Community College,” the organizer of the fundraising page, Dan Eubanks, wrote.

“In 2015 she was elected to represent district 40 in the Mississippi House of Representatives, where she stood up and fought for Constitutional freedoms and liberties at every turn.”

“She received several awards from the American Conservative Union and Americans for Prosperity for being one of the most conservative legislators in the Mississippi Legislature,” Eubanks added.

“After loosing her reelection bid by a mere 14 votes in 2019, Ashley continued to make a difference at the state level by serving as a fellow for the Mississippi Center for Public Policy where she reviewed ongoing legislation. Ashley was a devout Christian, and will be greatly missed.”