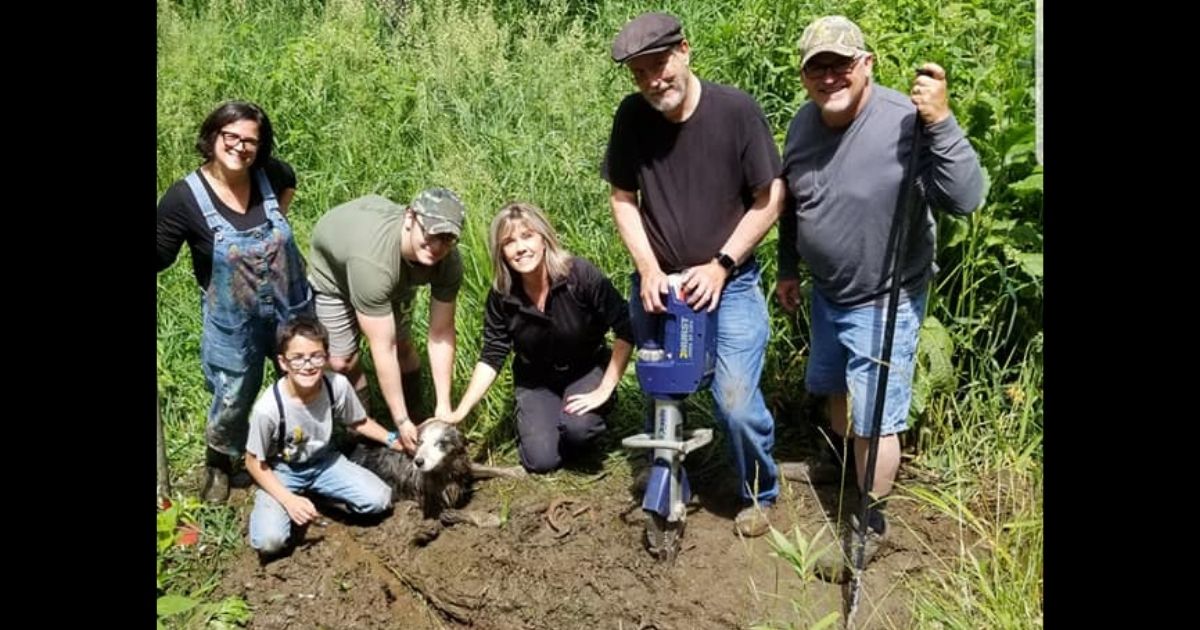 The following article, Firefighters Use Jaws of Life to Rescue Curious Pup Caught Between 2 Heavy Rocks, was first published on Flag And Cross.

Curiosity may have killed the cat, but it also nearly claimed the life of an inquisitive dog in Yancey County, North Carolina, earlier this month.

The 65-pound Australian Shepherd, named Gracie, likely went after some small creature down a hole that turned out to be a culvert with an exit too small for her to get through.

“This is the culvert she pushed all 65 pounds through,” owner Becky Rowe Smith posted online with a photo of the entrance. “She was probably pursuing a small animal that had no problem clearing the rocks at the other end!”

It was Emmie, the family’s other dog, that led the family to Gracie. And when they saw the spot she’d gotten wedged into, they started trying to figure out how to free her.

“Emmie is the hero who led me to Gracie this morning!” Smith wrote. “She’s normally light tan so she obviously stayed at her head in the mud pit.”

“I put her in her crate to feed her this morning and instead of gobbling her food she was restless and kept looking towards the driveway. So I said, ‘Show me Emmie!’ and she led me a short way down the gravel road that passes our house to where Gracie was!”

“It could have happened during the night while we slept or it might have happened in the early morning hours,” Smith explained to WLOS-TV.

“Emmie was covered from head to toe with mud though so I think that she had probably been there for a while and Emmie must have hung out there with her.”

One of the family’s sons, 9-year-old Josiah, quickly gathered the tools he thought would be most useful to free their dog.

“Josiah was such a trooper!” Smith continued in her post. “As soon as we found her he brought a sledge hammer to try to bust the rocks…..also a winch and whatever else his sweet little 9 year old mind could think of!”

Despite everyone’s attempts to free her, it soon became clear that it was going to take more than manpower to get her out.

To make matters worse, the large rock above her was unstable, causing Smith to worry about her dog’s safety even more.

Eventually, the fire department arrived with the infamous jaws of life and managed to rescue the adventurous dog.

“What a harrowing experience!” Smith wrote in her main post. “A big thank you to the Yancey County Sheriff’s Dept, Double Island Fire Department, and each one of you who prayed for Gracie! She crawled through a 25 ft long, 15 inch wide culvert that was blocked on the other side by large rocks.

“While waiting for animal control the fire department brought their Jaws of Life and were able to make a big enough opening through the rocks to pull her out. It was very scary because there was the possibility of the rock above her (which was moving) falling on her and crushing her. Praise God she’s safe!!!”

Gracie got lots of pats and hugs, and quickly polished off a bowl of her favorite food. Smith also said they made sure to cover the entrance with wire so that no doggies find themselves in a similar situation.