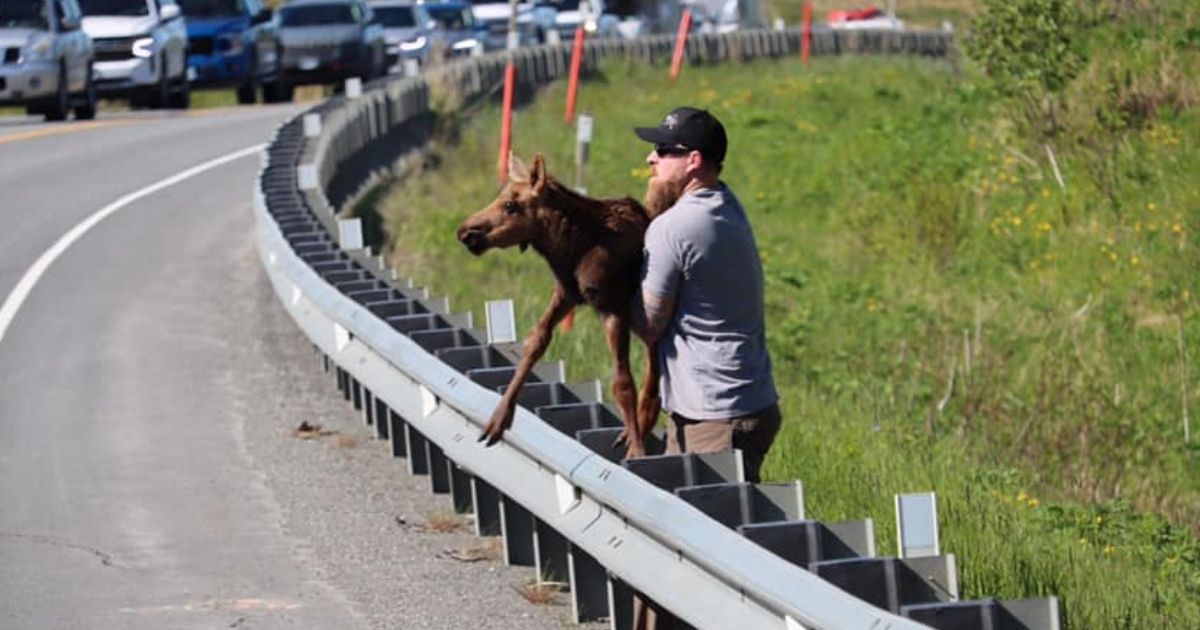 The following article, Alaska Man Helps Baby Moose Off Busy Road – 'It Could Have Gone Bad', was first published on Flag And Cross.

Moose are well known for being formidable wild animals. You don’t want to come face to face with one, and if you ever do, you want to give them a wide berth.

Joe Tate was just one of many who spotted a pair of the creatures in Anchorage, Alaska, on June 6.

A mother moose had crossed into the road, but her young baby was unable to get over the guardrail, leaving it stranded.

The worried mother was causing a traffic jam as she went back and forth over the road.

Tate had been fishing with friends in Ninilchik and was on his way home. He watched for about 30 minutes as the baby moose exhausted itself trying to get to its mother near Clam Gulch on the Kenai Peninsula.

Though Tate knew that moose are dangerous, he watched as driver after impatient driver sped past the mother and baby, and he was worried that there would be an accident.

“It was tired,” he said of the calf, according to KTUU-TV. “It was very, very young. I mean, week, week and a half old.”

“As we got closer, we started to see traffic — whether they were out-of-staters or locals — going around.”

“Well they were going around it [a] little bit faster speed than you want.”

Tate was also more qualified than most to do something about the situation. He’s lived in Alaska for over 15 years and spent time in the military. He’s also familiar with the territory and its inhabitants, and is a registered hunting guide.

All in all, he was able to take a calculated risk — and with the help of some friends — he went into action.

His friends pulled a trailer in front of the mother moose, cutting off her line of sight. Tate jumped over the guardrail, lifted the calf over, set it on its feet and let it go.

It ran to its mother, and the two left.

“It was calculated,” Tate said. “It was something we kind of looked at and talked about before we did it. It worked out for the best. And it could have gone bad and I understand and know that. But it did go the best, and it was worth the risk that I took.”

While Tate mentioned his background, he also stressed that he wasn’t an expert.

“Nowhere near expertise,” he said. “But I had some knowledge of what to do and what not to do, and handled it the best that it could be done.”

One woman who was on the scene when Tate and his friends pulled off the assist was able to get photos.

“After nearly 30 min of frantic pacing back-and-forth and the line of traffic growing more and more by the minute a gentleman from the northbound lane of traffic came and gave the calf some assistance,” Andrea N Salty Bock posted, along with a series of photos.

“He waited for the right moment in time when the mom was on the other side of the highway. Traffic blocked her view as he quickly grabbed the calf & placed her over the guard rail with her mother.

“I was [lucky] enough to be close enough to grab a couple photos!”

After the story got out, the Alaska Department of Fish and Game was quick to point out that this was a reckless idea and that, technically, handling or possessing a wild animal is illegal and a punishable misdemeanor.

“Well, the fact that he is an experienced outdoorsman and a guide probably helped him not get stomped,” Anchorage-area biologist Dave Battle with the Department of Fish and Game said, while still urging people not to follow his lead.

“We’re not going to track this guy down and try to issue him a citation for doing this,” Alaska Wildlife Trooper Lt. Chris Jaime added.

Thankfully no one was injured and the mother and baby were able to go on their way.