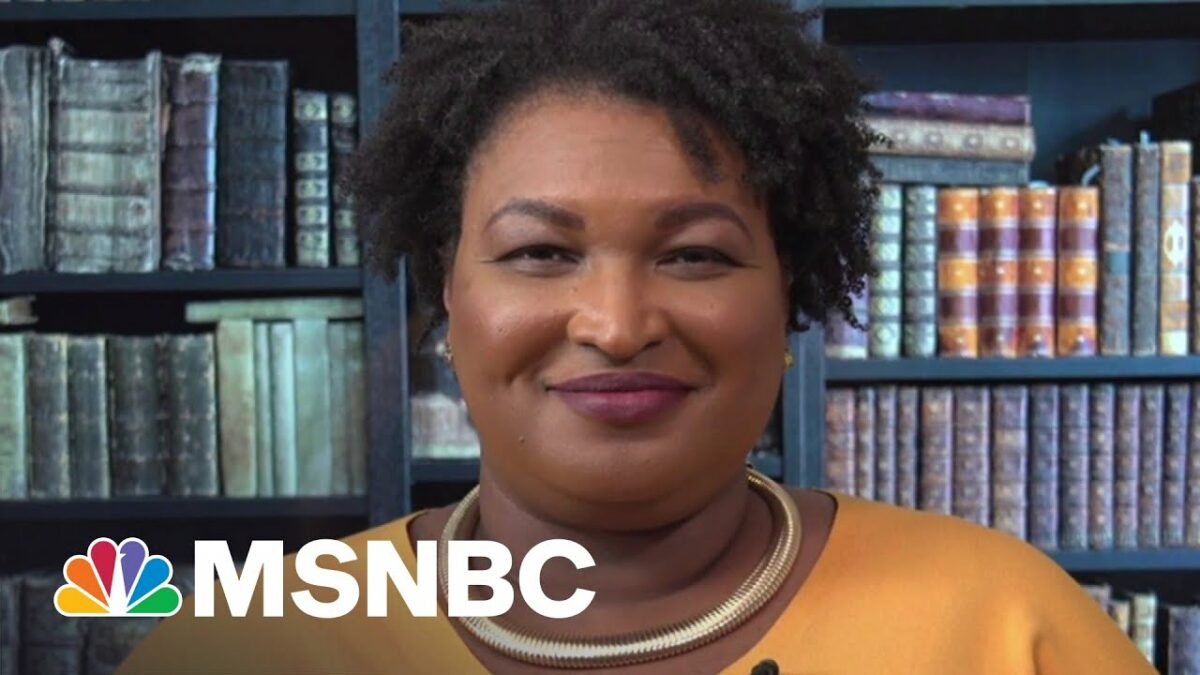 The following article, Stacey Abrams Accuses GOP of 'Insurrection' with Election Bills: 'This Is Not Hyperbole', was first published on Flag And Cross.

Democratic activist and failed 2018 Georgia gubernatorial candidate Stacey Abrams was most definitely not exaggerating when she said Monday that the January “insurrection” is “continuing” with efforts being taken right now to secure the country’s elections in multiple states.

How do we know she wasn’t embellishing her position? The anti-election security Democrat told us she wasn’t engaging in “hyperbole” while simultaneously claiming that the same political element that breached the U.S. Capitol on Jan. 6 is attempting at this very moment to subvert the democratic process through election integrity bills.

Speakers who preface wild statements with such overtures are, of course, almost always magnifying their own dishonesty and/or paranoia, which is what Abrams was doing when she spoke with MSNBC’s Joy Reid on Monday.

Abrams told “The Reidout” that GOP state lawmakers in places such as Georgia are out to disenfranchise voters of color, and that those lawmakers are motivated by a desire to destabilize the democratic process and discourage voting. Abrams said so while advocating for federalizing elections through the Democrats’ For the People Act.

“We have got to pay attention to the fact these laws do three things,” Abrama said. “One, they’re anti-voter. They are designed to stop voters that the Republicans found inconvenient in this last election. Namely, young people, people of color, the disabled.

“Number two, these are anti-election worker bills. They are designed to get good people to abandon their post. To criminalize those who still want to do their job and to replace them with those who will undermine the administration of elections.

“And three, they are designed to subvert democracy. The challenge is, to the extent we have secretaries of state who support and suborn this behavior, they are hastening the demise of our democracy, and this is not hyperbole,” she claimed, with breathtaking hyperbole.

“This is exactly what happens across the world when, you know, past, long-standing democracies start to erode.”

Abrams then claimed that election security laws are being tailored to “convince voters that it is not worth the effort.”

Abrams urged MSNBC viewers to call their Senate offices to try to pressure individual senators to vote for the For the People Act. (It would be interesting to know how seriously Republican senators would take the calls from MSNBC viewers.)

After Reid asked about Democratic senators facing voters in 2022, Abrams acknowledged that some had tough fights ahead of them.

“But we also have to remember that, beyond each individual candidate, it’s about who we are as a people, as a nation, are we willing to lose our nation to those who had the failed insurrection in January and decided to franchise it to every single state? The insurrection is continuing, and we’ve got to stop it in its tracks.”

There was, of course, no “insurrection” on Jan. 6. Likewise, there is also absolutely no charge being taken up right now by Republican governors and lawmakers to deny voting rights to persons of color. What we are seeing is a nationwide effort to ensure that Democratic Party measures to make elections less secure are rolled back.

Democrats used the coronavirus pandemic as a pretext to hold what were essentially mail-in elections in crucial swing states, which cast doubt about the integrity of the 2020 election in so many minds. We’re now experiencing the aftermath, as countless Americans don’t believe President Joe Biden won fairly.

Ensuring that no set of circumstances ever again calls into question the integrity of an election isn’t an act against democracy, and it certainly isn’t tantamount to an “insurrection.” Abrams, in hyperbolic, hypocritical fashion, equated election integrity measures to voter suppression and a forced takeover of government.

“Voter suppression” is what will have occurred if millions of honest Americans sit out the next election because they don’t believe their votes will count.

Democrats planted the seeds of doubt in the minds of millions prior to last November. Anecdotal evidence later told voters that, for all they knew, the urban Democratic machines were holding on to non-secure mail-in ballots in order to see how much they were behind on Election Day.

Those ballots predictably left voters scratching their heads when they never stopped being counted. Many will forever be convinced that non-secure ballots were kept in reserve so that Democrats were able to make up their deficits days after the election.

No court has yet accepted evidence that this occurred, but even the appearance of such a travesty should never occur again. Americans watched helplessly as voting precincts in Georgia, Michigan and Pennsylvania were inundated by mail-in ballots. The effects were national.

There is now a nationwide effort to ensure that this never happens again, and Abrams is sweating it. In what world does asking voters to prove their identity before casting a ballot disadvantage the disabled?

It doesn’t, which is why Abrams had to warn Reid’s audience that she wasn’t going overboard — right before she went overboard to make a claim that the same ne’er-do-well GOP voters and officials who didn’t believe the last election was free and fair, and showed up at the Capitol on Jan. 6, are now scheming to disadvantage the those among us whom Democrats often portray as perennial victims.

Here’s a not-so novel idea: Let’s make voters in every state and every election prove who they are before their ballot is even collected.

Continue reading: Stacey Abrams Accuses GOP of 'Insurrection' with Election Bills: 'This Is Not Hyperbole' ...