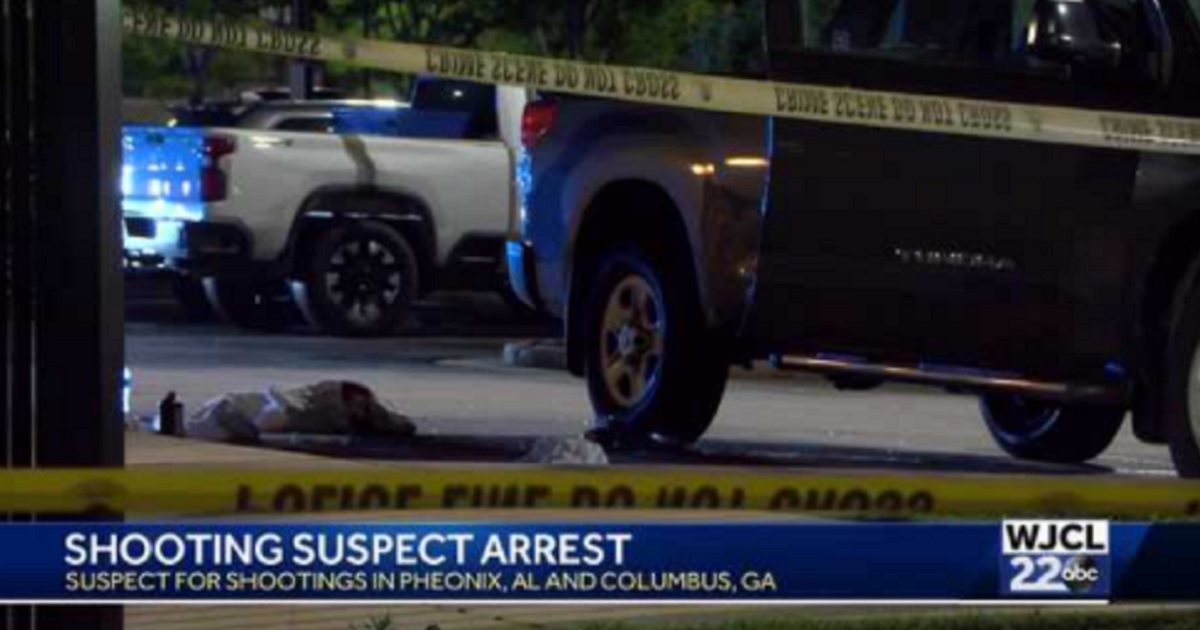 After his arrest in the shooting and wounding of five victims in three separate incidents on Friday and Saturday, a 39-year-old man readily admitted to police that the attacks were “racially motivated” and that he was targeting white men, according to a new report.

The attacks took place in Columbus, Georgia, and across the Chattahoochee River in Phenix City, Alabama.

According to the Ledger-Enquirer of Columbus, authorities say the suspect, Justin Tyran Roberts, shot his first victim Friday night at a Phenix City hotel; several hours later, he shot three more individuals in Columbus. On Saturday afternoon, the newspaper reported, he allegedly shot his fifth victim as the man was getting into a car on a Columbus street.

Columbus man arrested in connection to 2 shootings in less than 24 hours https://t.co/dc5jhthaqm

Speaking at a preliminary hearing on Monday for the final shooting, Detective Brandon Lockhart said Roberts told police that before pulling the trigger, he felt, “I just had to have him,” the Ledger-Enquirer reported.

Roberts also told police that white men had picked on him and wronged him for all his life, the newspaper reported.

According to the Ledger-Enquirer, Lockhart said that Roberts told police that men were “shooting at him in a wooded area with a slingshot” which had damaged his skin. However, he did not appear to have any injuries.

On Sunday, Columbus Police Chief Freddie Blackmon told reporters that all of the victims were expected to recover, the Ledger-Enquirer reported. He also said it did not appear that Roberts was familiar with any of his victims.

Roberts was assigned a public defender, Robin King, who asked the judge for a mental health evaluation for Roberts. King said, “The officer’s testimony has demonstrated that Mr. Roberts is having delusions and a disconnect from reality,” the Ledger-Enquirer reported.

The judge agreed and “found probable cause to send Roberts’ case to Muscogee Superior Court,” the report stated.

Just out of curiosity, I checked to see if CNN covered this story which it did. However — and this will come as no surprise — while CNN did include a photo of the suspect, the article made no mention of his race, the race of the shooting victims, or Roberts’ alleged motivation.

There’s not much mystery here. According to reports, Roberts told police the shootings were racially motivated and that he was targeting white people because white men had picked on him and wronged him for his entire life.

They are the oppressors and he is their victim: Roberts’ life went terribly wrong because of them. It’s not hard to understand why he might feel that way.

By their actions and their words, Democrats have instilled in blacks the notion that they are oppressed, helpless, and that the odds are stacked against them. Like all  Democratic lies, it’s been repeated so often that many blacks firmly believe that no matter how hard they work, they will never get ahead.

If parents or mentors tell children, continually, that even if they persevere, it will make little difference, the children will have very little incentive to try. And if those parents or mentors take it further and say, “But don’t worry. I’ll always make sure you have everything you need,” what little motivation the children may have had will evaporate.

The Democratic Party is not motivated by altruism. Its elites want to maintain this dependency because it gives them power over black Americans — and their votes.

Aside from preventing a large segment of the black population from breaking out of the cycle of crime and poverty, Democratic rhetoric, particularly since the death of George Floyd, has given that same segment of the population a green light to target whites.

The racial divide is the widest it’s been since the 1960s. And Democrats are responsible for it.

Can we finally stop saying that anti-white racism is impossible?