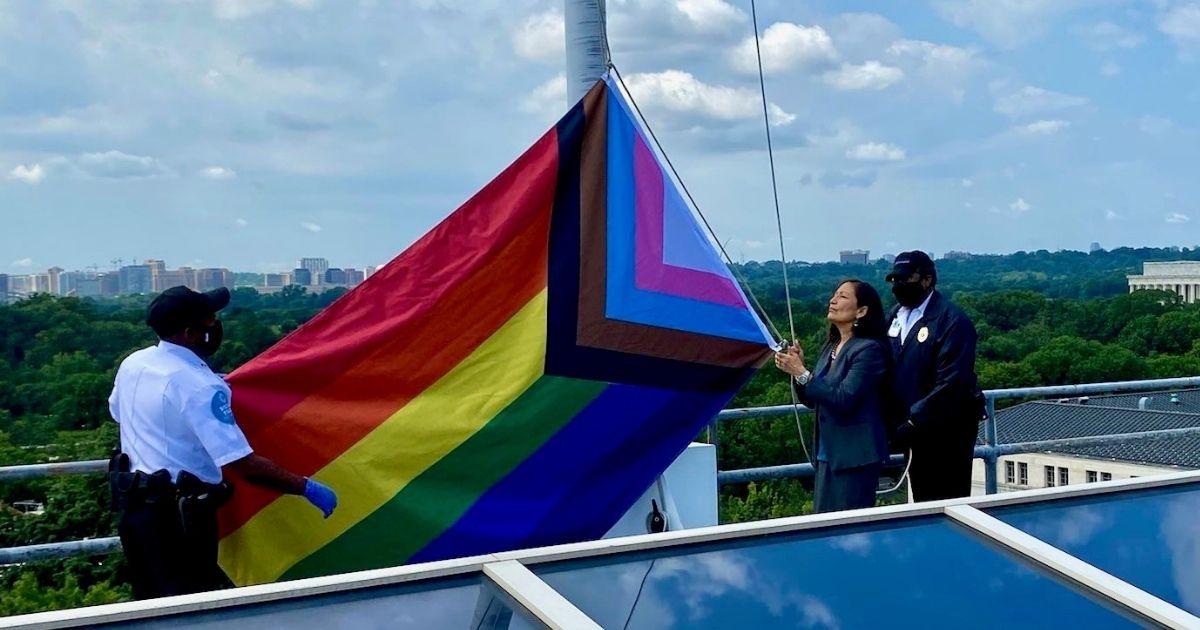 It’s a somber sign for a conquered nation to fly the flag of its enemy — and President Joe Biden’s government is intent on doing just that.

But rather than ceding our nation’s sovereignty to another country as a spoil of war, our leaders have fittingly declared sin’s easy triumph over the United States of America by flying the so-called “Pride” flag everywhere, including at the U.S. Department of the Interior.

The rainbow motif associated with celebrating lesbian, gay, bisexual, transgender and queer Pride Month in June has already been adopted by every pandering corporation and organization in America.

The flags associated with the movement are already having a banner year, enjoying new gravitas by flying high over U.S. embassies — including one at the Vatican.

But Interior Secretary Deb Haaland has both adopted the trend and upped the ante, deciding that her department needs to raise the newest iteration of the symbol. (Nor was she alone, as Energy Secretary Jennifer Granholm was photographed earlier this month raising the same flag outside her department’s headquarters.)

“Today we celebrate love,” Haaland tweeted Monday. “For the first time ever, the Progress Pride Flag is raised over @Interior.”

“Happy Pride!” she gushed, sharing a photo of the raising of the new “Progress Pride” flag, a new take on the traditional banner that boasts new colors of inclusivity.

For the first time ever, the Progress Pride Flag is raised over @Interior.

Left-leaning HuffPost acknowledged that Haaland was essentially thumbing her nose at former President Donald Trump and his refusal to get on board with the pro-homosexual agenda.

“The Department of the Interior is committed to telling the rich, diverse story of America and lifting up underrepresented peoples and communities,” Haaland said in a statement about the department flying the symbol for the first time.

“Despite many hard-fought victories, there is still a long way to go to ensure full liberation, peace, and equality for the LGBTQ+ community.”

Haaland said the move was “more than just a policy issue for me; it’s personal,” adding that she promised to be “fully committed to making the Interior Department a leader on inclusion and equity and to ensuring our decisions are informed by and centered around the voices of a diverse American public.”

HuffPost contrasted Haaland’s move with the actions of her Trump-era predecessor, Ryan Zinke, who opted to revive an old military tradition of raising and lowering a particular flag to indicate whether he was present or absent from the Interior Department’s headquarters in Washington, D.C.

But this kind of ritual — though a little archaic if not somewhat eccentric — is something still within the realm of political pomp and not a wholesale acceptance of a divisive value system.

Leftists have succeeded in getting the Pride flag adopted everywhere as they have carefully crafted their messaging surrounding the acceptance of homosexuality as a civil rights issue, using the language of freedom to shield them from any real public debate.

After all, who can be against equal rights and love?

But while it seems like an impenetrable forcefield has been built around the issue, one consolation is that the agenda’s own undoing may be found in the new revision of the flag that Haaland so proudly adopted.

Just like the alphabet soup of LBGTQ+, the flag has become a dumping ground for every proclivity and perversion that can be represented by a color and squeezed onto a piece of cloth.

Now they’ve also shoehorned the issue of race into the flag, a move which will become a political minefield as groups will seek to get their own colors included and blow up if they don’t.

Until that finally happens, however, Americans are stuck with an ever-growing monster of a movement that swallows up everything in its path, including some Christian denominations.

The relentless propaganda coupled with the cowardice of faith leaders to speak the truth has plunged many well-meaning people into embracing the deadly sins of pride and lust in a one-two punch.

Sin has conquered the hearts and souls of so many in this great nation, so maybe it’s fitting that the symbol for sodomy and perversion has a place of prominence in the government — at least until the nation can be conquered by the cross.