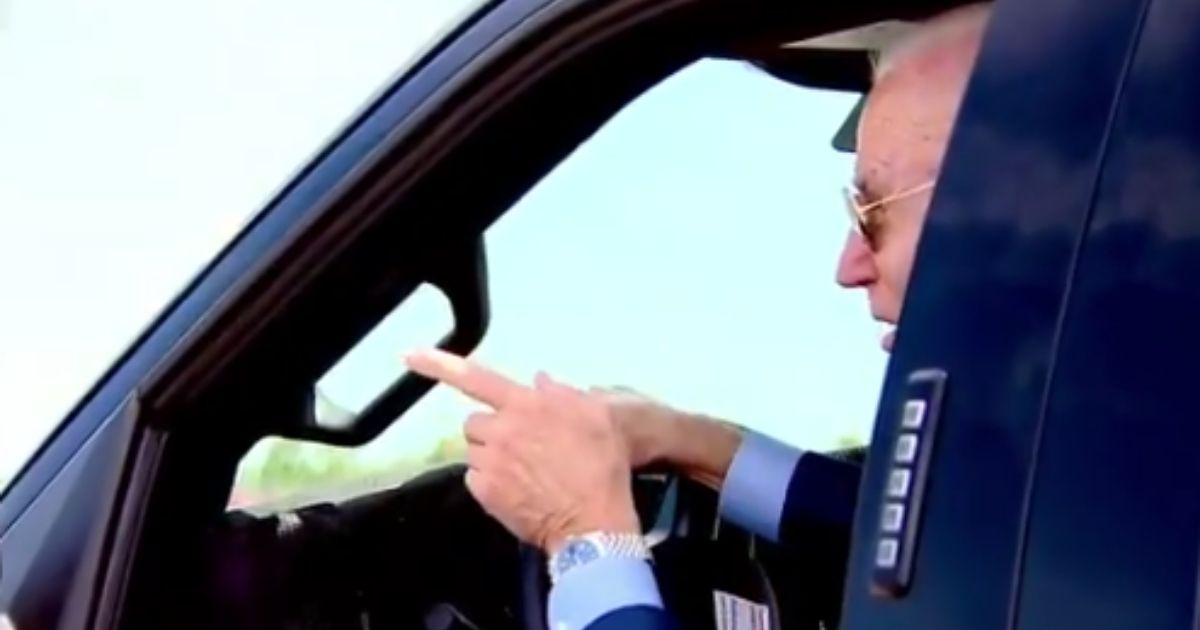 The following article, Would Trump Get Away with This? Biden Jokes About Flattening Reporter with Truck for Daring to Ask a Question, was first published on Flag And Cross.

President Joe Biden jokingly threatened to run over a reporter who attempted to ask him about the tense situation in Israel on Tuesday as he test-drove a Ford truck in Michigan.

The Democrat invoked vehicular homicide in a joke in Dearborn during a visit to a Ford facility where, to his chagrin, he was asked about the tense situation in Israel.

Being that he’s a Democrat, he not only didn’t have to, but he was given a pass on a joke that, if told not too long ago, would have possibly triggered another impeachment.

“Mr. President, can I ask you a quick question on Israel before you drive away, since it’s so important?” a reporter asked.

“I’m only teasing,” he added, before driving off in the truck.

REPORTER: Mr. President, can I ask you a quick question on Israel before you drive away since it’s so important?

BIDEN: No you can’t. Not unless you get in front of the car as I step on it. I’m only teasing.pic.twitter.com/A3jrsIi5mR

Now, anyone who heard Biden dodge a question while also joking about running down the person who asked knew Biden was kidding, even if the man isn’t funny. That being said, some at the scene seemed a bit uncomfortable after hearing the violent joke, as was apparent by the awkward chuckles that his comment prompted.

But the same activist media which demonized former President Donald Trump and portrayed his every statement as a threat to their lives was happy to give Biden what Trump always deserved — a laugh during a moment of levity.

Fewer than five months ago, if the president of the United States had joked about running over a reporter with a truck because that reporter asked an important foreign policy question, it would have dominated the news cycle. Trump, who was at times as hilarious as he was sharp, would have been dragged for weeks had he uttered the same joke, which we all know.

For example, when discussing a then-upcoming NASA and SpaceX rocket launch last May, Trump joked with reporters at the White House that he’d like to send them into orbit.

“I’m thinking about going, that’ll be next week, to the rocket launch,” Trump said. “I hope you’re all going to join me. I’d like to put you in the rocket and get rid of you for a while.”

Trump: “I’m thinking about going… to the rocket launch. Hope you’ll all join me. I’d like to put you in the rocket and get rid of you for a while.”

The comment was gold, even if the establishment media partisans didn’t think so. Wouldn’t it be nice to have that sense of humor back? Sadly, we’re stuck with Biden and his horrid jokes about killing people with Ford trucks.

Isn’t it odd that despite coming into office with the entire corporate media behind him, he has somehow managed to develop an at-times tense relationship with people in the White House media pool? On Tuesday, as was to be expected, they let him get away with it a joke about killing a woman.

As far as I can tell, not one person in that pool has thus far has connected Biden to vehicular homicides or accused him of threatening democracy. That’s because Biden shares the same radical vision for the country as do most of those who cover him up close.

Biden could presumably say anything to these people and not lose their support.

What is damaging to Biden risks undermining the Democratic Party’s agenda, which is to further destabilize the country.

Continue reading: Would Trump Get Away with This? Biden Jokes About Flattening Reporter with Truck for Daring to Ask a Question ...