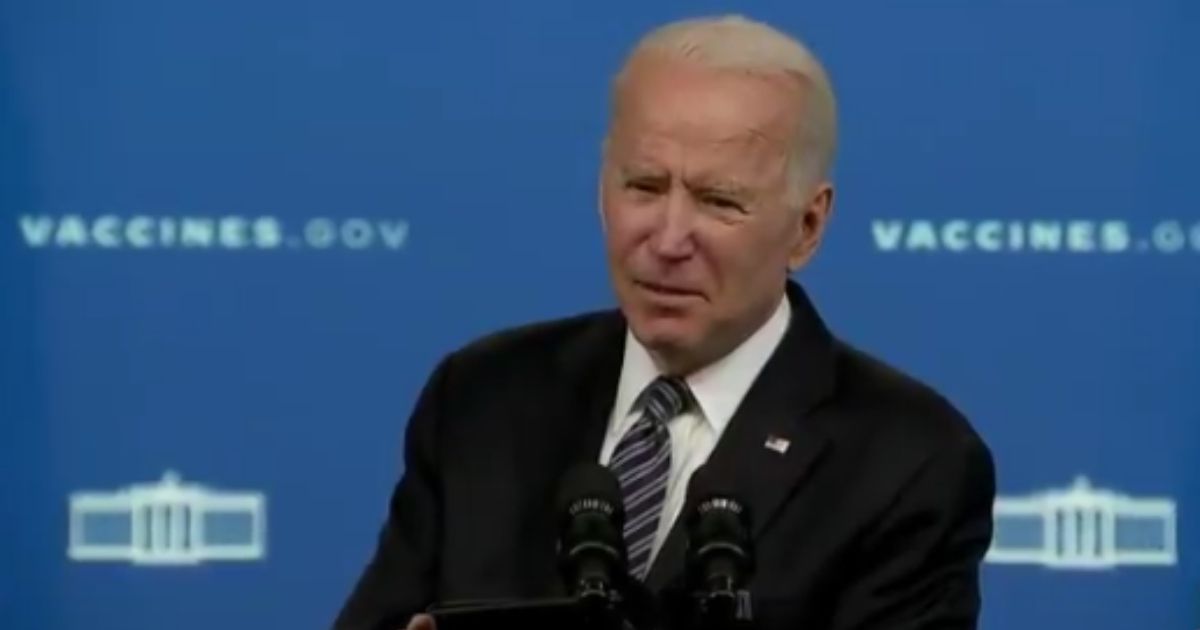 The following article, Watch Biden Appear to Forget Name of GOP Leader He Met with Just Hours Earlier, was first published on Flag And Cross.

It feels like conservatives’ favorite party game whenever some politician with a D after their name says or does something bizarre or odious: Imagine what the establishment media would have said if it were a Republican.

In the case of President Joe Biden, however, we don’t have to imagine.

With former President George W. Bush, malapropisms like “misunderestimated” were below-the-fold stuff. People continue to believe former President Ronald Reagan had Alzheimer’s during his second term despite not an iota of credible evidence to prove it, something even left-wing “fact-checker” Snopes conceded. As for Donald Trump, from the moment he took office, there were individuals — including Democratic politicians — beating the drum to have him removed for mental incapacitation under the 25th Amendment.

Meanwhile, one can imagine a scenario where you blindfolded Biden and spun him around three times, then asked him what office he held. Then he’d laugh: “Trick question. You can’t hold an office! Or any room, for that matter — those are some big suckers.”

That they are. You’ve got to get up pretty early in the morning to fool ol’ Uncle Joe, I must admit.

That same brand of whip-smart thinking was on display Wednesday, when Biden answered questions after an event focused on COVID-19 vaccine distribution.

According to a transcript of the event, the remarks came after he was asked questions by the media. The president tried to gracefully (but not too gracefully) bow out of questioning on his infrastructure bill, but he said he was heartened by the prospect of a bipartisan compromise.

“You guys are bad. I’m not supposed to be answering all these questions,” Biden said, according to the transcript. “I’m supposed to leave, but I can’t resist your questions.”

And then he demonstrated why he should have resisted:

“I’m encouraged, not just because of a solid meeting with uh, with uh, the uh, the Republican leader in the House and with uh, Mitch — or Sen. McConnell, who I’ve known a long, long time and worked with.”

Biden, it’s worth pointing out, had met with House Minority Leader Kevin McCarthy just hours prior to discuss the president’s infrastructure plan. According to CNBC, those talks didn’t get anywhere, although that’s not quite the point

Just one glitch like this and we’d be fine. After all, everyone has a busy day and a word like “misunderestimated” can escape their mouth.

Unfortunately, saying these blank moments are a theme for Biden is a bit like saying violence is a theme for Quentin Tarantino. Take this infamous clip from March where he tried to thank a Cabinet official but couldn’t quite put his finger on the name:

“I want to thank you both. And I want to thank Sec- — the, the, uh, former general — I keep calling him ‘General.’ My, my, uh — the guy who runs that outfit over there,” Biden said during an event celebrating International Women’s Day.

The “guy” was Defense Secretary Lloyd Austin and “that outfit over there” was the Pentagon:

Here’s a fully vaccinated President Biden at an outdoor event spending several seconds trying to figure out where his mask is. (Spoiler alert: In his pocket.)

Looks like President Biden forgot where his mask was. “I’m looking for my mask, I’m in trouble.” Meanwhile it was in his pocket the entire time. pic.twitter.com/cSnPQsg8MW

And don’t say the American people weren’t forewarned: Biden on the campaign trail was just as bad.

Here was March 2020, where he confused his wife and his sister in a speech he gave after his victories in the Super Tuesday primaries.

WATCH: Joe Biden confuses who his wife is and who his sister is during Super Tuesday speech. pic.twitter.com/79HyNCPnHB

In August, speaking to rap star Cardi B, he said he was “an expert” in part because he had five grandkids. Try seven.

Joe Biden told Cardi B this morning he has five grand kids.

None of us particularly knows what any of this means going forward, although it clearly means something when it comes to Biden’s clarity of thought at this juncture in his life. Then, we’re not even allowed to make an informed decision about what it means on our own. Unlike George W. Bush’s verbal gaffes or the whispers that Reagan was an Alzheimer’s case, this goes by with nary a peep from the establishment media.

And, as previously mentioned, this happened hours after both the president and House Minority Leader McCarthy had met at the White House. Liberal media outlets like The New York Times exploded at McCarthy’s insistence that “I don’t think anybody is questioning the legitimacy of the presidential election.”

The meeting also took place amid the backdrop of House Republicans’ decision to oust anti-Trump Wyoming GOP Rep. Liz Cheney from party leadership. (Biden told MSNBC later Wednesday the McCarthy/Cheney spat was “above my paygrade,” according to The Hill.)

That’s a pretty consequential day — and hours later, the president of these United States was trying to recall, um, what’s his name, that guy with the doohickey with the one that’s not the Senate and he’s not in control of it.

But alas: No “misunderestimated.”  No mention of Alzheimer’s. No talk about the 25th Amendment. Such are the myriad joys of having a D after your name.