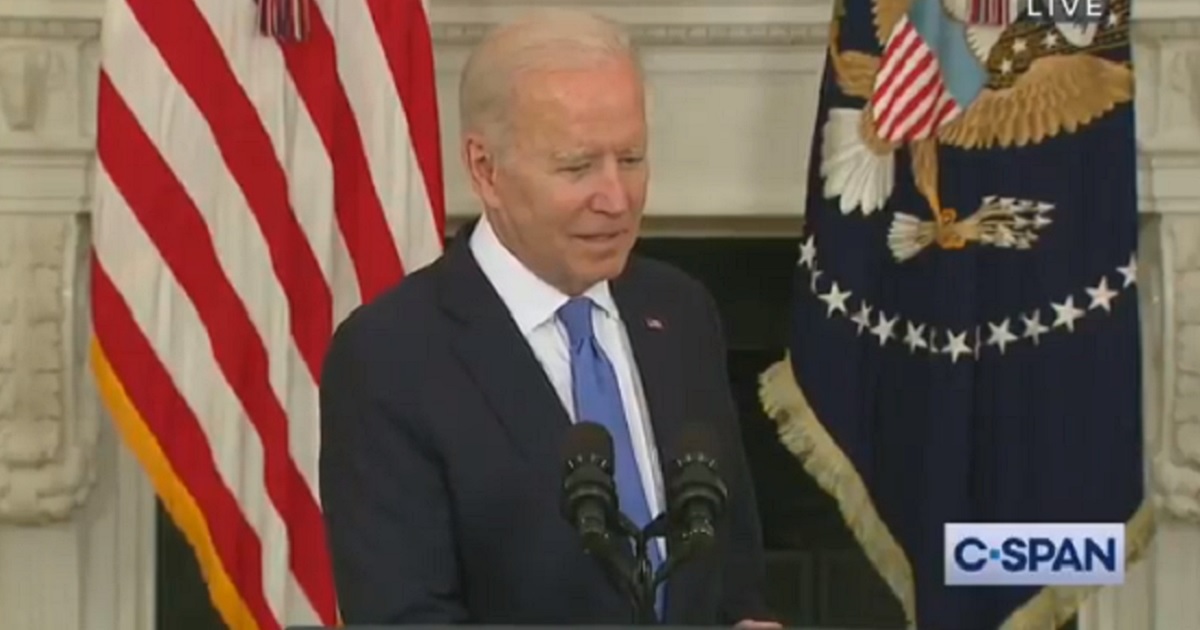 The following article, Joe Biden Verbally Struggles to Answer Basic Question Asked by Reporter, Stares Off, was first published on Flag And Cross.

On Wednesday’s episode of “Can Joe Biden Make it Through a Speech Without a Gaffe?”, our president had to use a lifeline when trying to figure out whether 2,300 or 2.3 million restaurant jobs were lost during the pandemic and ended up glitching out entirely when asked whether he could work with Senate Minority Leader Mitch McConnell.

Biden was speaking to reporters at the White House hyping up the American Rescue Plan. In case you’ve forgotten, that’s the one with $1.9 trillion in spending for COVID relief that really isn’t about COVID relief, as opposed to the $2.3 trillion infrastructure plan that isn’t really about infrastructure or the $1.8 trillion families plan that vaguely has something to do with families, but that’s primarily a pretext for another round of taxing and spending.

The first sign things were not going to go smoothly was that Biden’s struggle tried to recall the number of jobs that had been lost in the restaurant sector — and got it wrong by a considerable amount.

After the speech, answering questions from the media, Biden stumbled again when asked about his relationship with Senate Minority Leader Mitch McConnell.

“Mitch McConnell said that he is 100 percent focused on stopping this administration. You’ve spoken about your relationship with him in the past. Do you still think you could work with him when he says things like that?” a reporter asked.

Having used his lifeline on that jobs question, Biden verbally struggled badly:

“Look, he said that in our last administration. Barack, he was going to stop everything,” Biden said, according to the Rev.com transcript.

“And I was able to get a lot done with him.”

An uneasy moment followed where Biden simply stared until his thoughts apparently reconnected.

“Again, look, everything I’m proposing that be done to generate economic growth, employment and put us in a position where we can out-compete any other country in the world with research and development and moving ahead, I pay for,” he said.

“I love, we talk about how this is going to cost so much money and not paying for it. The bottom line is this: My Republican friends had no problem voting to pass a tax proposal that expires in 2025 that costs $2 trillion.”

It’s questionable, of course, just how accurate Biden was when he said he was “able to get a lot done” with McConnell during the “pen and phone” presidency of the Obama years. (Does Biden remember, say, the nomination of Merrick Garland to the Supreme Court? It didn’t work out so well.)

From there, though, it was pretty much a boilerplate Biden speech that went on for some time: A word salad of half-formed thoughts, factoids and rhetorical questions all on the general topic of economic growth. In the transcript, you can see him apparently grasping at buzzwords for straws, all to no avail.

McConnell, and the potential for working with him, wasn’t even mentioned beyond that first sentence. And the president’s halting manner of speech does not instill confidence in a wary nation.

Sure, all politicians have moments like that. The problem is that this kind of glitching happens too often with Biden. It’s just not normal.

It’s a wasteful parlor game to try and guess if there’s anything cognitively wrong with Biden and how problematic it is. What we know from watching him is that there’s visible diminishment, moments where he’s like an 8-year-old mid-range laptop trying to load Photoshop.

The best example of the phenomenon came during his first official news conference as president on March 25.

According to a Rev.com transcript of that event, this came in the midst of Biden answering a question about gun control with a meandering spiel about infrastructure and jobs. Eventually, he made a whirring noise and shut down.

This is too frequent to be put down as cherry-picking. In nearly every media briefing, whenever Biden isn’t delving into a pitch he’s given a thousand times, the likelihood of a cringeworthy moment abounds.

Sure, it may be fun to watch an episode or two of “Can Joe Biden Make it Through a Speech Without a Gaffe?” but there is a worrying element Americans can’t expect to hear about from the mainstream media:

The fact the contestant seems to lose more often than he wins should be a worrying augury for how the next four years are going to go, and where they’re going to take the country.