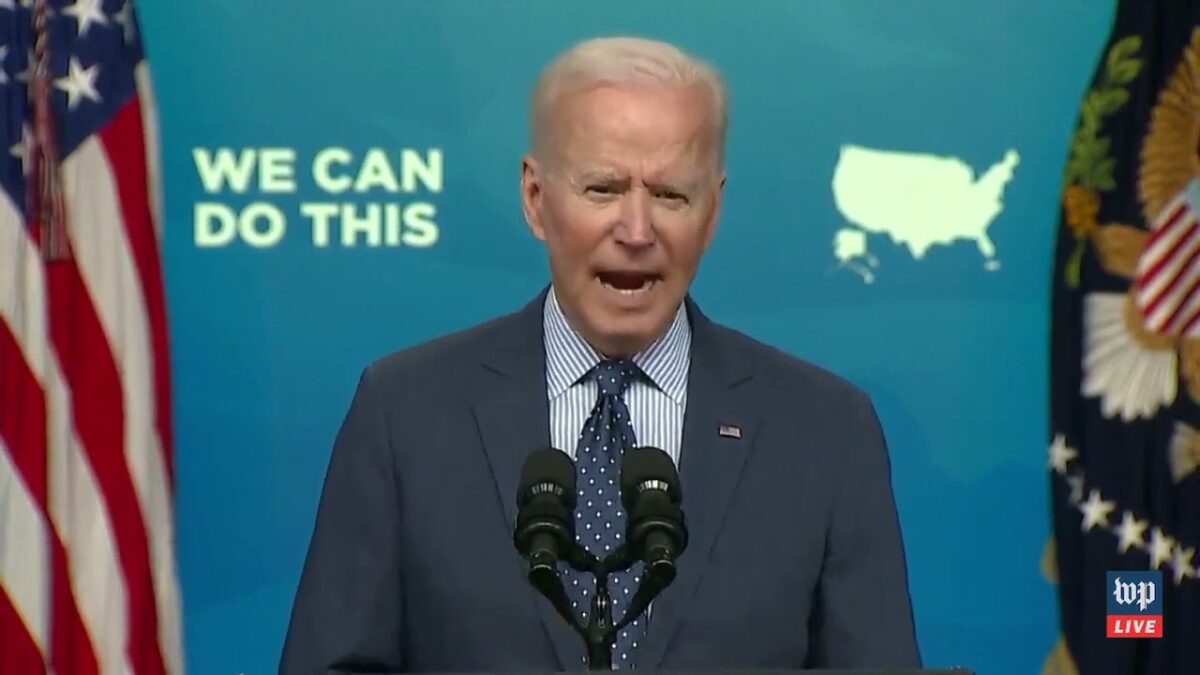 The following article, Biden's '15 Months' Gaffe Was So Big That the White House Had to Clarify on Official Transcript, was first published on Flag And Cross.

Most Americans won’t have a problem remembering the pandemic-plagued year of 2020.

The 46th president, a man whose verbal discipline has always left a lot to be desired, outdid himself on Wednesday while discussing coronavirus cases in a way that had to have even his strongest supporters worried, and the White House transcript writers making instant corrections.

There’s no doubt that’s laudable against COVID-19, and no doubt it’s largely due to former President Donald Trump’s Operation Warp Speed vaccination program (credit Biden and his fellow Democrats will never extend where it’s due).

There’s also no doubt it’s one of the most disturbing gaffes in Biden’s long history of mangled sentences.

In fact, it’s tough to even understand without a look at the transcript, since a normal person would assume at first that Biden was referring to his inauguration date of
Jan. 20, but the “15 months ago” reference would have put it — roughly — in January 2020, a time when Biden was not only not the president, but talk of coronavirus cases was not even on most Americans’ horizon.

The official White House transcript clears things up. It also makes clear that some judicious editing was in order (note the brackets):

Just like that, thanks to shameless editing, “15 months” gets changed to “[5] months”.

But there’s a bigger question.

Considering how much the world has changed since January 2020, when Trump was still in the White House, Biden was still a private citizen, and many American cities had yet to experience the murderous violence that wracked the country for much of year, it doesn’t seem like much to expect the man who holds the presidency to remember that.

But this is Joe Biden, the candidate whose constant gaffes on the campaign trail would have disqualified him for office if the mainstream media hadn’t been desperate for any Democrat to defeat Donald Trump.

It’s worth noting that Biden’s confusion of Jan. 20 — the date he was inaugurated to the presidency — with January 2020 — a month that now seems like the Age of Innocence in some ways — went largely ignored by the same mainstream media that carried Biden’s moribund campaign across the finish line in November.

Fortunately, that doesn’t mean it disappeared.

Imagine what it must be like to live in the White House and think it’s just a nice assisted living facility.

JOE BIDEN SAYS THAT HE THINKS HE WAS ELECTED PRESIDENT OF THE UNTED STATES FIFTEEN (15) MONTHS AGO.
Joe Biden has completely lost the ability to calculate time. https://t.co/f9KV7CpM8H

And….This is what 80 million people voted for.

Mainstream media figures are free to ignore lapses like this, of course. The liberals who run the nation’s newsrooms have the man they want in power. If he’s a doddering, potentially corrupt political hack of the worst order, it clearly doesn’t make much difference.

The fact that a good deal of the country is worried that the president doesn’t have the mental capacity to do the job means nothing to the liberal elite.

But there’s the rest of the world to consider, too. If the journalists of Washington and New York don’t consider it noteworthy that the commander in chief of the American military doesn’t know what year it is, it’s a rock-solid certainty that the hard cases in the Kremlin, in Beijing and in Tehran are watching closely.

Biden things January was 15 months ago. He’s incapable of reading a calendar, much less being president. The US is trouble. This is why we are being tested repeatedly by China, Russia, etc. Voting matters. https://t.co/HIS7irXRvi

Putin is just chomping at the bit to have his way with Biden!

Most Americans remember well that in January 2020, the country had not yet been tormented by a new disease that looks more and more like the result of Chinese research gone awry.

They also remember that the country had a president in office who put America first in all decisions, which meant the border was stable, the economy was humming and even longtime foes in the Middle East were taking historic steps toward peace.

All of that disappeared in the year that followed, thanks to a virus from China abroad and chicanery by the Democratic Party, the mainstream media and Big Tech at home.

Americans remember that. Even if Joe Biden doesn’t.

Continue reading: Biden's '15 Months' Gaffe Was So Big That the White House Had to Clarify on Official Transcript ...