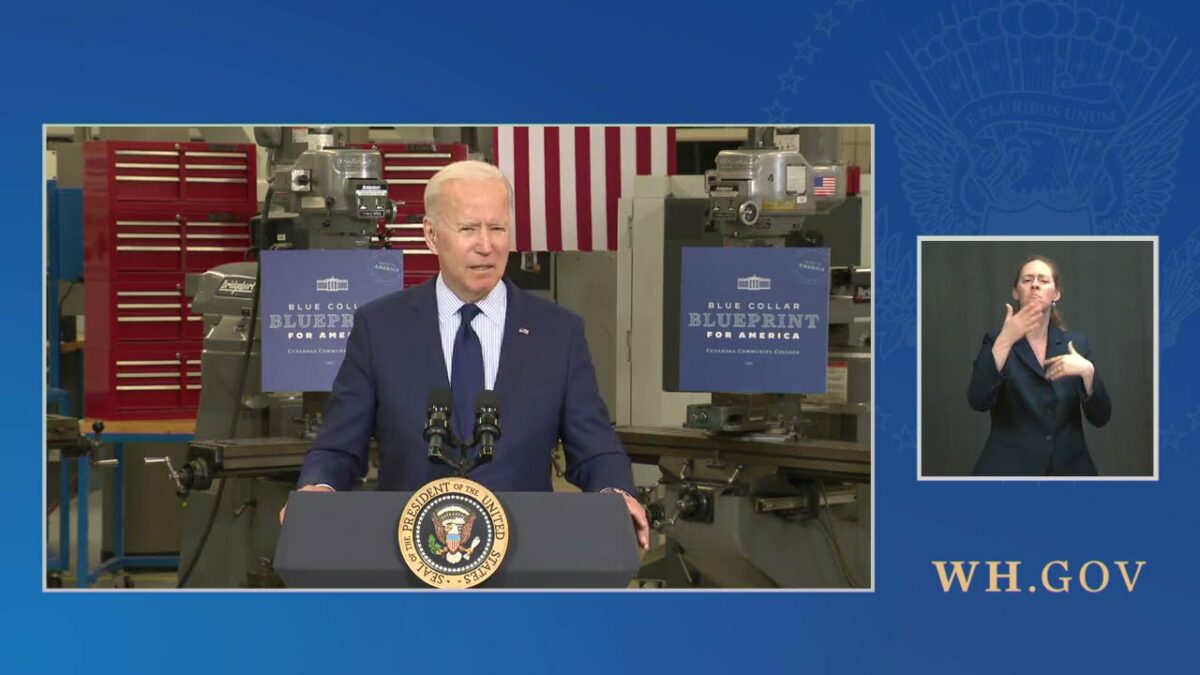 The following article, Biden Tries to Do Math in His Head, Ends in Complete Failure, was first published on Flag And Cross.

President Joe Biden tried and failed in Ohio on Thursday to take on basic mathematics when discussing his economic plan for the country.

But to be fair to the absentminded president, it was later in the afternoon.

C-SPAN reported Biden was speaking at Cuyahoga Community College in Cleveland, where he called for free tuition for community college students, as is laid out in his nearly $2 trillion American Families Plan.

Biden droned on and on — then on some more. For roughly 40 minutes the commander-in-chief bored people, refused to stand still and continued his abuse of that poor sign language interpreter.

He eventually at one point during his remarks got around to focusing on corporate stock buybacks. As the video below shows, Biden is not well-versed in business — or math.

“But here’s the point: After all is said and done, that leaves 8 percent of that trillion dollars for research and development.”

As the RNC Research Twitter account that shared Biden’s brain flub pointed out, Biden’s answer to the problem came out to 102 percent.

Perhaps Biden just disclosed why his administration is spending the country off the fiscal cliff. Maybe, just maybe, this is why Democrats are so horrible with money management: The most powerful among them can’t handle basic addition.

Add Biden’s porous accounting to his mounting number of alarming gaffes. The man can’t string together more than a couple of sentences without confusing everyone around him — especially that poor sign language interpreter.

Biden definitely seems to have become more comfortable giving speeches in recent weeks. Sadly for those of us who watch them, he hasn’t gotten any better at the part where he’s speaking.

Look no further these recent attempts to convey some semblance of a coherent message:

Minute after live stream started, Biden says “I’m just waiting for them to tell me when we get going here since we’re live streaming this” pic.twitter.com/yV21Hz646I

Joe Biden repeatedly forgets he was first inaugurated as vice president in 2009: “January of 2018…I mean excuse me 2012”https://t.co/71qj2HGJ8a pic.twitter.com/mdCPNs4uhT

In a bizarre, meandering livestream put on by Joe Biden’s campaign today, he forgets what year it is and when, if he doesn’t lose, he would be in office.

At another point, he seemingly forgets he’s on a live stream and walks out of frame. The feed cuts away to a logo instead. pic.twitter.com/yM2zFoBfhv

Biden represents America’s interest abroad, where our country’s adversaries are always watching. After Biden’s math gaffe in Ohio on Thursday, don’t look for him to bring the Chinese or the North Koreans to the table any time soon.

Why should representatives from either country engage with the 78-year-old? Biden’s proven he’s his own worst enemy.

All anyone seeking to take advantage of the country needs to do is stay out of his way.

Continue reading: Biden Tries to Do Math in His Head, Ends in Complete Failure ...