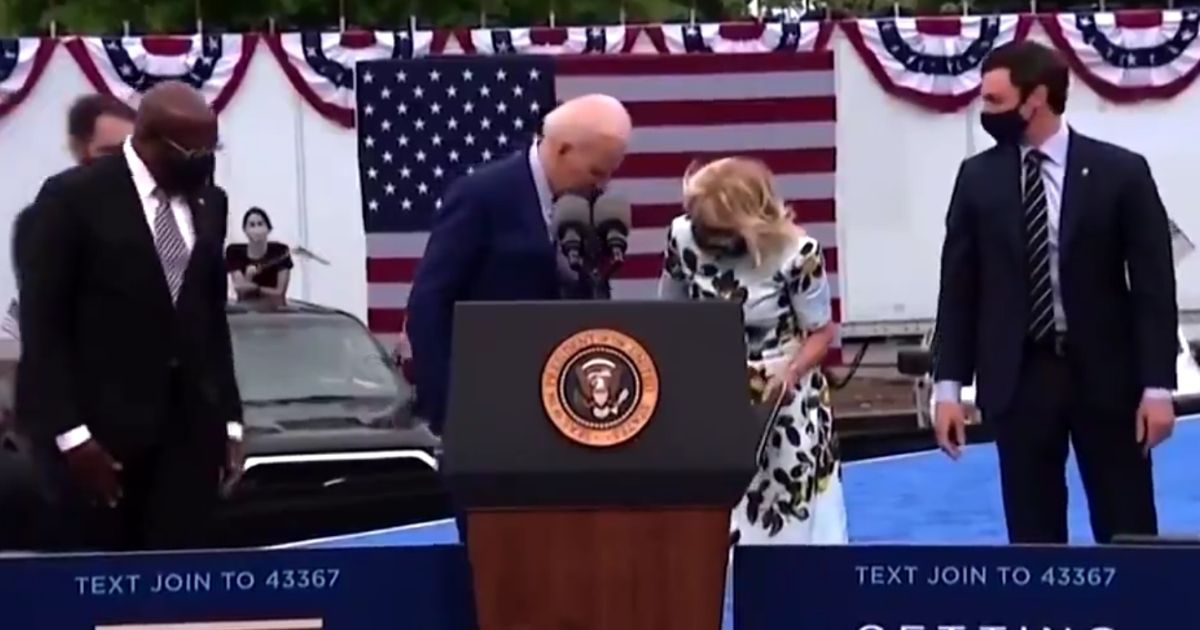 The following article, Biden Silences Hecklers with Ambitious Vow, Then Forgets Where He Put His Mask, was first published on Flag And Cross.

In the wake of President Joe Biden’s Wednesday speech to a joint session of Congress, the media did everything within its power to convince us that the massive spending bills and federal power-grabs he was proposing weren’t really radical.

CNN: “Joe Biden to showcase his moderate radicalism in his big congressional address.”

The Washington Post: “Why Republicans can’t convince America that Biden is a radical.”

Despite $4 trillion in spending being pushed on Wednesday, despite Biden’s calls to pass bills that would federalize police procedures and election laws — both in Democrats’ favor — that wasn’t radical.

And you know what? Perhaps they’re right. Perhaps Joe Biden is a man in decline who believes he’s a transformative figure like FDR, the only man who can meet the moment — if only he could remember what moment it was.

If you’re like me and believe Biden is a doddering, self-important man who can easily be led by his party’s left flank, consider a speech at a car rally in Georgia on Thursday where he appeared to promise to abolish Immigration and Customs Enforcement and close private detention centers in less than a week and then, minutes later, couldn’t even find where he put his mask.

According to NBC News, the “Getting America Back on Track” tour started in a state where Biden could score some points on the left for House Resolution 1, a federal bill that would effectively nullify Georgia’s election integrity legislation.

“You know how precious and precarious the right to vote is,” Biden said. “Your vote changed the world.”

“But instead of celebrating that, it’s being attacked.”

This was the same lecture we’d heard Wednesday night, barely warmed over for the Georgia crowd on Thursday evening. Progressive protesters wanted him to go a bit further, as a video posted by ABC News correspondent Karen Travers showed.

The president engaged with them-and at one point said to give them a microphone.

(Several shouted that they voted for him) pic.twitter.com/7q0ehc3IQf

Biden’s response to silence the hecklers: “I agree with you. I’m working on it, man. Give me another five days.”

BIDEN: “I agree with you. I’m working on it, man. Give me another five days.” pic.twitter.com/oaJle6BrLw

As Travers reported, Biden went on to say, “Folks, you all know what they’re talking about. There should not [be] private prisons, period. None … Private detention centers. They should not exist, and we are working to close all of them.”

Amid the interruption, Biden responded with:
“Folks, you all know what they’re talking about. There should not private prisons, period. None…Private detention centers. They should not exist, and we are working to close all of them.”

Probably not in five days, though, and abolishing ICE is going to take a lot longer than that. (Interpreting Biden’s comments in good faith probably requires us to acknowledge he wasn’t calling for ICE to be abolished. Moreover, Biden told reporters later that he was “teasing” the protesters about the five-day timeframe, according to the New York Post. Still, his comments did make it seem like he was calling for ICE, and private prisons, to be abolished in five days.)

Putting a cherry on top of this performance was Biden’s exit, in which the fully vaccinated president struggled to find his mask. (Spoiler alert: It was in his pocket.)

Joe Biden, who is fully vaccinated, loses his mask in his pocket.pic.twitter.com/zHW9Lq5r6P

As Biden was searching for his mask, Jackie Wilson’s “(Your Love Keeps Lifting Me) Higher and Higher” was playing in the background: “I’m so glad / I finally found you.” And, just at that moment, our president found his facial covering and held it aloft as if he’d pulled Excalibur from the stone. Who says the universe doesn’t appreciate a bit of irony?

In two moments from an otherwise anodyne speech, we can see what the Biden presidency is devolving into. While no one is going to be abolishing ICE anytime soon — and Biden was hardly to be counted among those clamoring for it during the campaign — it’s pretty clear the “Enforcement” part of Immigration and Customs Enforcement isn’t even among the remotest of priorities for the new administration. They’ve ended contracts with private prisons at the federal level.

And yet, that’s not enough for the protesters who crashed the event. Biden’s response? Sure, whatever you want, guys. Five days, honest. I can get it done by then. Just let me find my mask and we can get this show on the road.

Biden isn’t a radical by nature, but he’s also a man who doesn’t stand for much aside from his own self-preservation. He’s faced no punishment from either the media or voters for taking a hard turn left, at least not yet.

If this is the kind of reflexive placating he needs to stay in the party’s good graces, he’s more than willing to jump — or at least pay lip service to it. It’s the path of least resistance for a diminished man who’s lost the capacity for resistance.

Whatever the case, he’d better get it together. Banning private prisons and abolishing ICE is a lot to do in less than a week, particularly when you’ve got to find your mask on top of all that.

Continue reading: Biden Silences Hecklers with Ambitious Vow, Then Forgets Where He Put His Mask ...