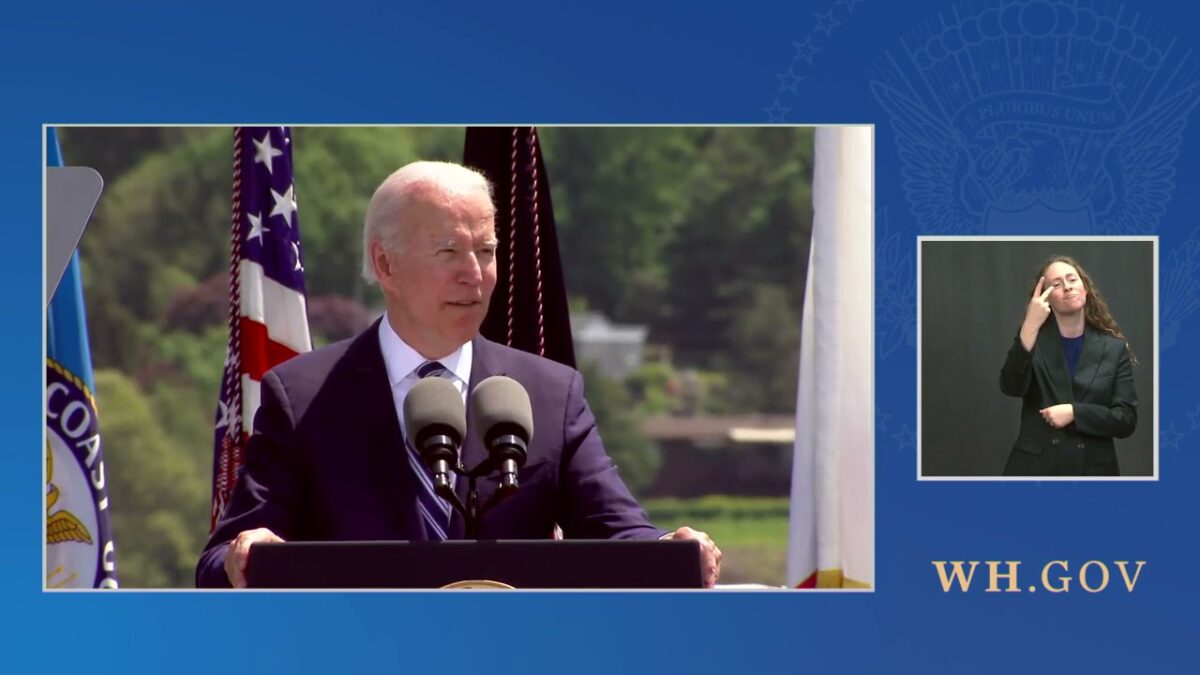 The following article, Biden Repeats Quote Made Famous by Mao as Military Seemingly Set to Begin Witch Hunt of 'Extremists' in the Ranks, was first published on Flag And Cross.

President Joe Biden addressed graduates of the U.S. Coast Guard Academy on Wednesday in Connecticut. During his speech, he used a variant of a quote made popular by Chinese dictator Mao Zedong.

Biden was addressing the fact that women made up one-third of the academy’s 2021 graduating class.

“We have to make sure that women have the chance to succeed and … thrive throughout their careers,” the president said.

“There’s a saying that we use in a different context, a Chinese saying that says, ‘Women hold up half the world.’ It’s an absolutely stupid position not to make sure they represent at least half of what we do.”

The “saying” was very similar to one popularized by Mao: “Women hold up half the sky.”

Fox News noted that the declaration by the leader of the Chinese Communist Party in the 1950s was used as propaganda “to promote the CCP’s ‘Great Leap Forward’ endeavor, which led to tens of millions of deaths.”

Biden did substitute the word “sky” for “world,” but his characterization of it as a “Chinese saying” seems to suggest that he was referring to the same quotation used by Mao.

After the latest incident, many conservatives pointed out the bad optics of Biden using a quote popularized by a dictator, particularly at a graduation ceremony for a military academy.

“These students have bravely committed to serving our nation and protecting our freedoms in the United States Coast Guard,” Republican Rep. Mike Rogers of Alabama said on Twitter.

“And for some reason, President Biden decided to quote Mao Zedong, a communist dictator and mass murderer, at their graduation.”

I have no words. These students have bravely committed to serving our nation and protecting our freedoms in the United States Coast Guard.

And for some reason, President Biden decided to quote Mao Zedong, a communist dictator and mass murderer, at their graduation. https://t.co/3uLAEC4xIV

More concerning than the quote itself, however, is the context in which it was said.

The Intercept reported Monday that the Biden administration is developing a plan to “continuously” monitor service personnel for “concerning behaviors.”

“As part of the Biden administration’s crackdown on domestic extremism, the Pentagon plans to launch a pilot program for screening social media content for extremist material,” the report said.

The Intercept said it had reviewed Defense Department documents and talked to “a source with direct knowledge of the program.”

The program, it said, “will rely on a private surveillance firm in order to circumvent First Amendment restrictions on government monitoring.”

Obviously, no sane American wants any “domestic extremists” in the ranks. The concern, however, is that the Biden administration should not be trusted to define “extremism.”

The left has repeatedly categorized behavior it dislikes as “extremist.” With no clear definition of the term, it is possible that troops could be reprimanded or even kicked out of the military simply because they hold conservative political views.

Some military personnel are fighting back against the idea that “extremism” is common in their ranks.

In a House Armed Services Committee hearing on April 20, Adm. Charles Richard, commander of U.S. Strategic Command, told lawmakers he was not at all concerned about “extremists” infiltrating his ranks.

“I am very confident that the number of extremists in my forces is zero,” Richard said, according to a transcript on the STRATCOM site.

“Every person in my organization has to have a security clearance for starters. Right?” he said. “And when you fill that form out, and I’ve been filling it out for 40 years, there’s an extensive battery of questions designed to get after that very point. And then somebody goes and investigates you, and then they go talk to all your references and then they go talk some more, hunting for that very thing.

“We don’t care what the source of extremism was, those date back to — communism was actually what they were looking for when I first came in and today they’ll even look at your social media.

Obviously, the Biden administration is not akin to a Chinese communist dictatorship, and it’s not going to kill millions of Americans.

With that said, the irony of the president’s sharing a version of Mao’s propaganda quote amid his administration’s reported plans to spy on military personnel should not be lost on everyday Americans.

Continue reading: Biden Repeats Quote Made Famous by Mao as Military Seemingly Set to Begin Witch Hunt of 'Extremists' in the Ranks ...