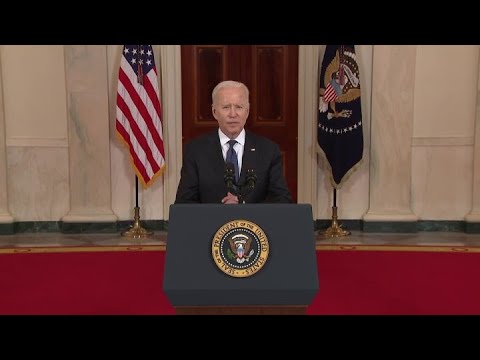 The following article, Biden Gets Lost Reading His Notes: 'But, Uh, There’s, You know, There’s to Be, You Know, Beginning, Uh', was first published on Flag And Cross.

Granted, the last gaffe was on Friday, May 21, which meant there was a weekend to take it easy over. Oh, and there were actually two gaffes during that event, but we’ll get back to that later. The point being: There was some Joe-mentum going in terms of eloquence.

And then the weekend ended and the president visited the Federal Emergency Management Agency headquarters on Monday to announce his intention to double spending on extreme weather preparedness, according to CNBC.

The trip was supposed to tick off two boxes on the Biden agenda scorecard.

First, it was another one of those “mo’ money, less problems” pitches we’ve heard nonstop over the past few months. You almost had to give him points for restraint, not classifying the increase in FEMA spending as “weather infrastructure” and including it under his infrastructure program. (I probably oughtn’t give him ideas.)

The doubled funding, he said, was in “time to get ready for the busiest time of the year for disasters in America,” including hurricanes and wildfires.

Second, it was a good opportunity to highlight Biden’s aggressive pitch on climate change spending. (Or is it the “climate crisis” now? Are we still calling it that?)

Biden just signed an executive order directing federal agencies to assess financial risks to the public and private sector. He didn’t put too fine a point on that during his brief opening remarks on Monday, but he did make note of how the funding is “going to help communities, including those too often overlooked, and it’s going to invest in resilience and better protect themselves to serve for other climate events that we’re going to be facing.”

And when I say these remarks were brief, we’re talking eighth-grade essay brief. If you stumbled reading something like this to the class when it came your turn to present, you’d get marked down to a B-minus.

Here’s the leader of the free world, meanwhile:

Joe Biden gets lost reading his notes, makes no sense:

“There’s help is — we — there, you know, being there to help clear roads, rebuild main streets, and so that the families can get back to their lives, uh — that’s what FEMA does every single day.”

You can almost hear the phone call just outside the room: “Psaki, got a minute? Yeah, someone has to reset the workplace counter to zero. Yeah, the FEMA remarks. I know, I know — we kept them about as short as a haiku, but he still couldn’t nail it.”

At least the stakes were lower here. The May 21 gaffery involved a joint media briefing with South Korean President Moon Jae-in at the White House. It was an event that — to quote Biden himself in a different context — was “a big f***ing deal.”

Both Biden and Moon are dealing with a newly belligerent North Korea; the rogue state was particularly unimpressed that President Biden referred to its nuclear program as being a threat “to American security and the security of the world” during his address to a joint session of Congress last month. Intelligence reports have indicated Pyongyang is also getting closer to developing a nuclear-armed ICBM that could hit the U.S. mainland.

This was, in other words, the moment to put North Korean leader Kim Jong Un’s regime on notice that America’s being run by a sharp operator at the top of his game.

“This includes everything from strengthening our cybersecurity to deepening our cooperation to build out an open secure G5 network — 5G network, I should say. I’m talking about the G-5, that’s another organization,” Biden said at one point during the news conference.

For the uninitiated, the G-5 is a group of five emerging world economies: Brazil, China, India, Mexico and South Africa. Think of it as a shadow G-7, the international group of industrialized economies: the United States, Canada, France, Germany, Italy, Japan, and the United Kingdom. It has nothing to do with 5G, which is the wireless infrastructure we’re apparently working tirelessly with Seoul to secure.

During another part of the May 21 ceremonies, Biden awarded the Medal of Honor to 94-year-old Korean War veteran Ralph Puckett, according to the New York Post.

“The people in the Republic of Korea haven’t forgotten, as evidenced by the fact that the prime minister of Korea is here for this ceremony,” Biden told the Medal of Honor recipient.

Unfortunately, South Korea doesn’t have a prime minister, it has a president: Moon Jae-in.

Also unfortunately, both of these mistakes happened May 21 while the White House workplace gaffe counter was at zero due, all to a similar error Biden made during a speech announcing the May 20 cease-fire between Israel and Hamas, when he referred to Israeli leader Benjamin Netanyahu’s job title incorrectly.

Netanyahu is, of course, the prime minister of Israel, not the president. Biden got that fact mostly right during the rest of the speech — but the speech lasted 3:21.

What’s most worrying about the FEMA and Netanyahu gaffes is that they came during prepared remarks of remarkable brevity. There was no improvisation, no question that caught Biden off guard, nothing like that.

On May 20, there was a teleprompter. On Monday, there was a piece of paper. In those controlled hothouse conditions, we got “President Netanyahu” and “uh, there’s, you know, there’s to be, you know, beginning, uh, this effort for 2021 is, uh — I think we’ve learned a few lessons from the last year, as well.”

This isn’t cherry-picking or harping on minor mistakes. Without claiming to know why it’s happening, what we can say with certainty is that we are and have been watching, for some time, some form of entropy take its toll on the man who is now the leader of the free world.

If liberals want to disbelieve their eyes and ears, fine. The workplace counter doesn’t lie, and the wolfishness of our adversaries isn’t affected in the least by the denial of Biden’s true believers.

Continue reading: Biden Gets Lost Reading His Notes: 'But, Uh, There’s, You know, There’s to Be, You Know, Beginning, Uh' ...