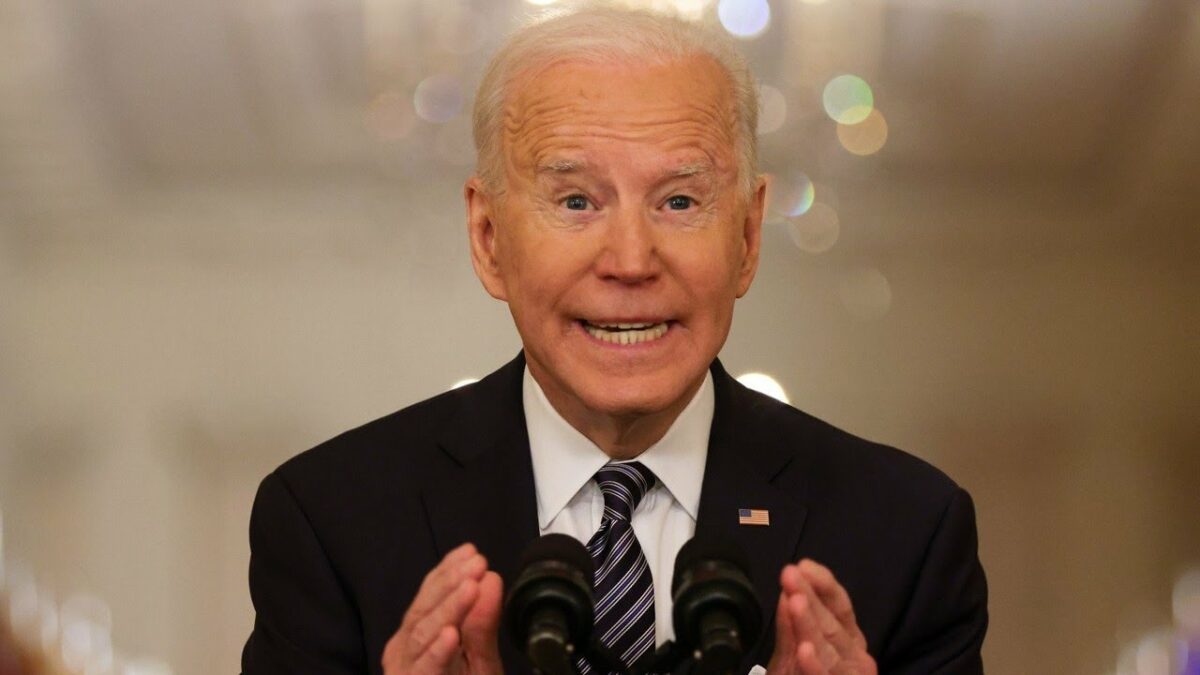 The following article, Biden Confuses Syria for Libya Not Once, But 3 Times in Bumbling Response to Russia Question, was first published on Flag And Cross.

The Biden administration is officially a global laughingstock.

The events of the past few days underscore that Vice President Kamala Harris is not ready for prime time. And her boss, President Joe Biden, is well past his prime — not because of his age, but because of his obvious cognitive decline.

At a Sunday news conference on the final day of a meeting of the leaders of the world’s seven most industrialized nations in Cornwall, England, the doddering career politician confused Syria with Libya three times in response to a simple question about Russia’s military actions in Syria.

This is horrible. At some point his cognitive disfunction has to be considered a natl security threat if only because of the confidence it must give our enemies “President confuses Syria with Libya three times”
pic.twitter.com/R7is0yl2MR

“We can work together with Russia,” he said. “For example, uh, in Libya, we should be opening up the passes to be able to go through and — provide, uh, provide, uh — food assistance, an economic, I mean, vital assistance to, uh, a population that is in real trouble.”

During the course of a 90-second statement, Biden appeared to lose his train of thought multiple times.

“I think I’m gonna try very hard — by the way, there’s places where — I shouldn’t be starting off by negotiating in public here, but let me say it this way — Russia has engaged in activities which we believe are contrary to international norms,” he continued.

“But they have also, um, uh, bitten off some real problems they’re gonna have trouble chewing on. And, for example, the rebuilding of uh, oh uh, Syria, of, uh, of Libya — you know, this is — they’re there. And as long as they’re there without the ability to bring about some order in the region, you can’t do that very well without providing for the basic economic needs of people, so I am hopeful that we can find an accommodation that where we can save the lives of people in, for example, in, uh, in Libya.”

Contrast Biden’s disjointed rambling during a 90-second statement to the frequent, 90-minute news conferences held by former President Donald Trump, where the establishment media parsed every word in an effort to mock and attack him.

Conservative commentator Eric Bolling echoed the sentiments of numerous Americans when he wrote in a Twitter post: “Scary stuff folks … How much longer will this go on before someone steps in?”

How much longer will this go on before someone steps in? https://t.co/Fsa5HOhIZk

Republican Tennessee congressional candidate Robby Starbuck recalled that the Biden camp had insisted the 78-year-old Democrat was prepared for the G-7 summit because he had been “studying for weeks,” as Fox News reported Thursday.

Starbuck tweeted: “Remember Jill Biden said this week that Joe has been ‘studying for weeks,’ he was ‘over prepared’ and said ‘Joe loves foreign policy, this is his forte.’ Joe’s own staff admits he was wrong and meant Syria.”

“If this is his ‘forte,’ then we’re in some real trouble,” Starbuck warned.

Remember Jill Biden said this week that Joe has been “studying for weeks”, he was “over prepared” and said “Joe loves foreign policy, this is his forte”. Joe’s own staff admits he was wrong and meant Syria… If this is his “forte” then we’re in some real trouble.

Shen Shiwei, a reporter for Chinese state media, gleefully jabbed at the latest warmongering Democrat installed in the White House.

Understandable. When they’re bombing so many countries at once, so hard to remember those names. https://t.co/EIVLmgDLnm

The communist journalist was presumably referring to this: The U.S. military under former President Barack Obama dropped more than 26,000 bombs in 2016 alone, according to a 2017 report by Micah Zenko, a senior fellow at the Council on Foreign Relations. That was seven years after Obama was awarded the Nobel Peace Prize.

Despite Obama’s bombing blitz, ISIS expanded and the Middle East became more unstable during his tenure.  Even leftists admit this.

Just to give you an idea of how propagandized liberals are @BarackObama dropped over 26,000 bombs in 2016 & liberals still won’t admit that he’s a war criminal. All they care about is warm fuzzy platitudes so they can maintain the illusion that they’re better than conservatives. pic.twitter.com/SqRYJd0AR0

Australian Sky News host Chris Smith expressed horror at the septuagenarian’s behavior during the summit, saying “he shouldn’t be leading” the United States.

On Monday, Smith said there has been growing worldwide concern about Biden’s mental capacity, “which is just painful to watch sometimes.”

At one point, the broadcaster showed a distressing video clip of a confused Biden bumbling around a coffee shop in Cornwall.

“Take a look at this footage of the president wandering around lost in a café in England,” he said. “It was posted on Friday and largely ignored by mainstream media.”

Joe Biden seems to get lost at the G7 summit in England, Jill comes to the rescue @JoeBiden @G7 @FLOTUS @USAmbUK pic.twitter.com/GFxGouRCoA

After reviewing the disturbing montage of unsettling blunders Biden committed in just a single weekend, the journalist remarked: “This guy will be very lucky to last his full term.”

Smith verbalized the thoughts of countless terrified Americans. This is a tragic situation for the United States and for its allies around the world.

Continue reading: Biden Confuses Syria for Libya Not Once, But 3 Times in Bumbling Response to Russia Question ...