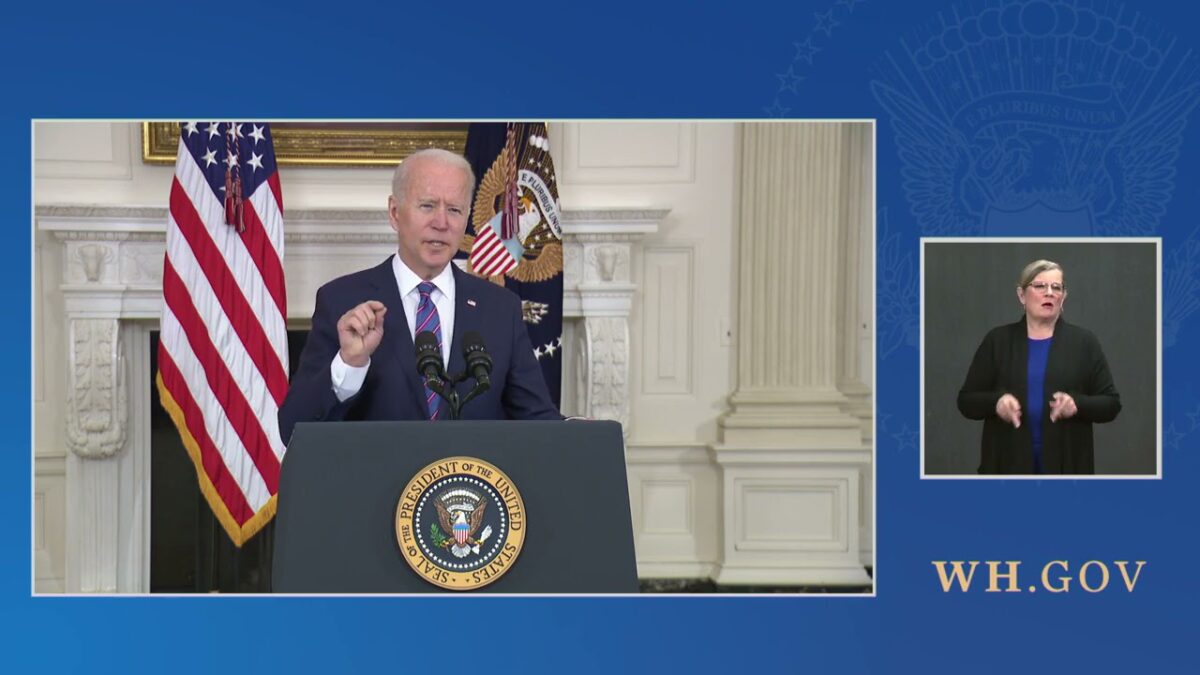 The following article, Biden Claims US Is on the Right Track Despite Devastating April Jobs Report, was first published on Flag And Cross.

President Joe Biden delivered a series of remarks Friday claiming America was on the right track despite a devastating jobs report released earlier in the day showing the nation only added 26 percent of the anticipated number of jobs in April.

American employers added 266,000 jobs in April, a far cry from the 1 million jobs anticipated by economists, according to CNBC, and the unemployment rate rose to 6.1 percent.

Biden delivered his remarks at the White House, opting to wholly ignore his administration’s failure to get Americans back to work with the $1.9 trillion American Rescue Plan.

“The earliest signs from this job report, just announcing today, are promising,” Biden said, “and the American Rescue Plan is starting to make a real difference.”

“Today, there is more evidence our economy is moving in the right direction,” he said.

“This is progress. This is a testament to our new strategy,” he continued. “We’ve got work to do, to state the obvious, we have work to do.”

Biden also briefly acknowledged there were, in fact, 8.4 million fewer jobs now than a year ago before continuing on his campaign of spin.

“The bottom line is this: Today’s report is good news,” Biden said.

Any thinking person knows this is actually terrible news, and the Democrats’ campaign of COVID fearmongering and ill-conceived unemployment bonuses are keeping Americans from rejoining a workforce eager to welcome them back.

Indeed, according to The Associated Press, fear of COVID is driving innumerable Americans to refuse to return to their face-to-face jobs and parents throughout the nation are now needed at home more than ever as their children are forced into distance learning initiatives.

It was mind-numbingly disingenuous of Biden to tell Americans Friday he’s getting them back to work while simultaneously touting the fact his administration sent checks to more than 130 million households precisely so they could afford to stay home.

As if that were not enough, Biden had the gall to lay responsibility for America’s current woes, as well as its hopes for the future, at the feet of American business owners.

The president used his 11 minutes of self-congratulatory hyperbole to defend his administration’s unprecedented $6 trillion in proposed spending, all while singling out businesses that did not want to pay for his ludicrous socialist pipe dreams.

The comment will no doubt cause many an American to raise an eyebrow, especially given that the Biden family reportedly claimed more than $13.5 million from speeches and book sales from 2017-2019 as corporate profits rather than income, effectively using a loophole to allegedly dodge more than $500,000 in taxes.

There are worker shortages across the nation and yet unemployment rose last month, and Biden still wants to shell out money the nation doesn’t have to fix problems his administration is creating.

Democrats are paying Americans not to work while increasing the number of visas so that companies can replace them with cheap foreign labor.

Only a fool could agree with Biden that the US is on the right track when a jobs report is this bad, and only a party of fools could agree to keep this administration’s loony policy proposals afloat in the face of such rampant failure.

If this administration really wants to heal the nation, it will end cash-to-stay-home programs and give American citizens the chance to do work worth doing.

Continue reading: Biden Claims US Is on the Right Track Despite Devastating April Jobs Report ...