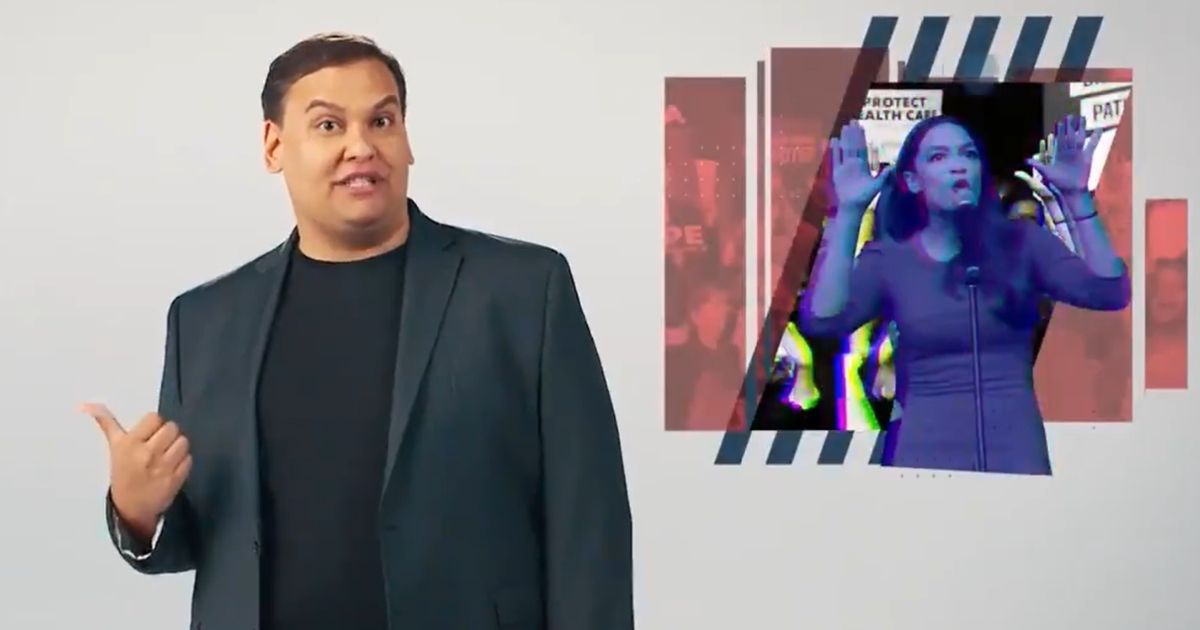 The following article, 1st-Generation American Pays for 3-Minute Ad Warning About AOC – Announces Bid for House, was first published on Flag And Cross.

Republican congressional candidate George Santos of New York sounded the alarm on the insidious encroachment of socialist values into today’s Democratic Party, saying his suburban Long Island district must not devolve into a left-wing cesspool like nearby New York City.

“The politicians in Manhattan are destroying New York City, and we don’t want those bad policies here in Long Island,” he said. “We see the devastating effects, and we want nothing to do with it.”

The 32-year-old finance executive is running in New York’s 3rd Congressional District, which is currently represented by Democratic Rep. Tom Suozzi, who has been in office since 2017.

Santos, who’s openly gay, said it’s time to end the stranglehold that Democrats have had on New York because their destructive policies are ruining the state.

The son of Brazilian immigrants took aim at his state’s Democratic leaders, who he said are failing their constituents.

They don’t get us: We back the blue, support job creation & reject Socialism

Help me put a stop to these radicals

The Republican said if “you don’t like the police, don’t call them.” However, he pointed out that “over here in Long Island, we love the police and we back the blue.”

Santos urged voters to not allow his suburban district to devolve into a crime-infested inferno the way New York City has.

He said “failed leadership from the radicalized Democrats have turned New York City into a third-world hellhole, and we cannot let that happen in Long Island.”

Santos said he’s a first-generation American whose family fled from socialism “not once, but twice.”

He said his parents immigrated to the United States to escape socialism, so he’s alarmed that today’s radical Democrats are trying to bring socialism to this country.

“I never thought we would be fighting socialism right here in America,” the candidate said. “But radical extremists have infiltrated our government. They are pushing a socialist agenda that will destroy our country from the inside-out.”

Santos scoffed at Ocasio-Cortez, saying she embraces socialism even though “it’s anti-freedom, anti-American and it sucks.”

“Sorry, AOC, but America will never be a socialist country,” he declared. “Not if I have anything to say about.”

Santos said he has seen firsthand how socialism has destroyed the lives of his family members, including his grandparents, who survived the Holocaust.

“I despise this evil system. It has been tried and tried again and always fails,” he said.

He explained that socialism is a dangerous form of government because it takes power away from the people and puts it in the hands of corrupt leaders who abuse it.

Santos said self-proclaimed “Democratic socialists” such as AOC want to build a welfare state that will force the people to depend on the government “so we can be their slaves.”

This is why Democrats want to defund the police and take away our guns, he said.

“Who do you call when you’re in trouble?” Santos asked. “You don’t call BLM or antifa. You call 911, unless you’re a wealthy politician like Rashida Tlaib or Ilhan Omar and you can afford private security. What about the rest of us?”

Santos underscored that he’s not like other politicians, who use their public offices to enrich themselves. To prove this, he vowed to never accept a salary.

“I pledge to never take a salary,” he said. “I promise I won’t funnel millions of campaign finance dollars to my husband like Ilhan Omar. Every penny from my campaign will go right back into the fight against socialism.”

Santos, who vowed to fight for freedom and liberty, closed his video by saying, “Send me to Congress and let’s send these commies packing.”

This is the second time he’s running for Congress. He was defeated by Suozzi in 2020.

With 100% of precincts reporting, an openly gay son of Brazilian immigrants — Republican George Santos — leads a Democratic House incumbent in #NY03, 50.5% to 49%. Would be a GOP pickup.

With his fiery patriotism and energetic rhetoric, Santos has a good chance to win this time around — as long as the election is fair and there are no inexplicable irregularities of the kind observed in some districts in November 2020.