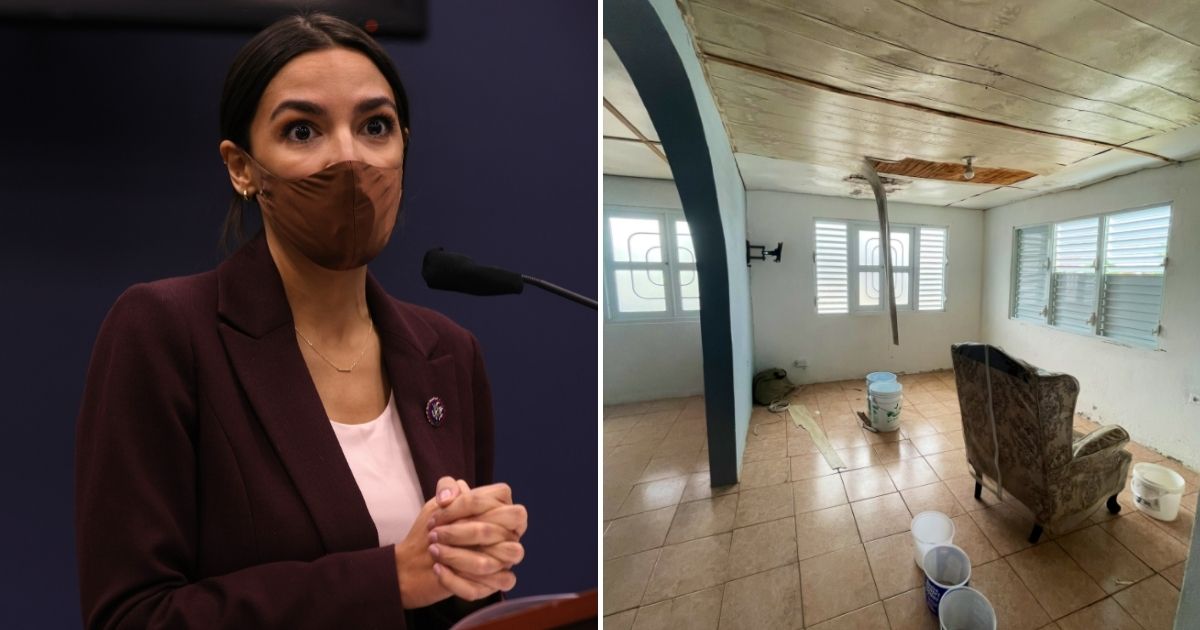 The following article, Turns Out AOC's 'Aunt' Does Not Blame Trump, Instead Blames Puerto Rico – Just Like Trump Did, was first published on Flag And Cross.

A new Daily Mail report suggests that Democratic Rep. Alexandria Ocasio-Cortez of New York was not speaking for everyone in her family when she blamed former President Donald Trump for the living conditions in Puerto Rico.

In early June, Ocasio-Cortez claimed her grandmother was ill and tweeted a photo purporting to show hurricane damage in the woman’s house.

“Just over a week ago, my abuela fell ill. I went to Puerto Rico to see her- my 1st time in a year+ bc of COVID. This is her home. Hurricane María relief hasn’t arrived. Trump blocked relief $ for PR. People are being forced to flee ancestral homes, & developers are taking them,” she tweeted.

Just over a week ago, my abuela fell ill. I went to Puerto Rico to see her- my 1st time in a year+ bc of COVID.

People are being forced to flee ancestral homes, & developers are taking them. pic.twitter.com/wnRxLalA2D

That triggered conservative commentator Matt Walsh to launch a GoFundMe effort to pay for any home repairs and other assistance needed for Ocasio-Cortez’s abuela. However, the effort ended abruptly after someone from Ocasio-Cortez’s family told GoFundMe that the beneficiary would not be accepting the over $100,000 that was raised.

.@MattWalshBlog of the Daily Wire fundraised for @AOC‘s grandmother, after AOC tried to blame Donald Trump for her poor living conditions.

AOC thinks it’s better to denounce “systematic injustice” than actually do anything to help. https://t.co/dpMRyL3tSE

According to the U.K.’s Daily Mail, the outlet sent a reporter and photographer to visit the woman identified as Ocasio-Cortez’s grandmother, Clotilde Rivera — to check on her house and speak with her.

When Daily Mail staffers reportedly arrived at Rivera’s house in Puerto Rico, the outlet said the journalists were greeted by a woman who refused to give her name but said, “I am her aunt. We don’t speak for the community.”

Unlike Ocasio-Cortez, the woman allegedly said, “We are private people, we don’t talk about our family.”

The woman who said she was Ocasio-Cortez’s aunt reportedly told the outlet that the damage from the 2017 hurricane still impacts many people on the island.

So not only did @AOC exploit her abuela, she also lied about her. https://t.co/8CgBoksd6h

“In this area people need a lot of help. Many people have needed it for the past four years and haven’t had anything,” she said, the Daily Mail reported.

However, the “aunt” did not heap abuse on former President Donald Trump, according to the outlet.

“It’s a problem here in Puerto Rico with the administration and the distribution of help. It is not a problem with Washington. We had the assistance and it didn’t get to the people,” she reportedly said.

During his administration, Trump consistently emphasized that the island’s governance was an issue in getting federal aid to those who needed it.

The Daily Mail reported its team did not enter the house, nor could they speak to Rivera.

The outlet stated that the team asked to speak with Rivera, and the woman who said she was Ocasio-Cortez’s aunt went into the house briefly before emerging.

“She’s not talking to anybody,” the woman reportedly said.

The team noted that in terms of damage, all they could see from the exterior was a blue tarpaulin on the roof — noting that that is not uncommon.

Continue reading: Turns Out AOC's 'Aunt' Does Not Blame Trump, Instead Blames Puerto Rico – Just Like Trump Did ...

The aunt knows and understands this aoc ‘person’ better than the fools voting her into being their rep.