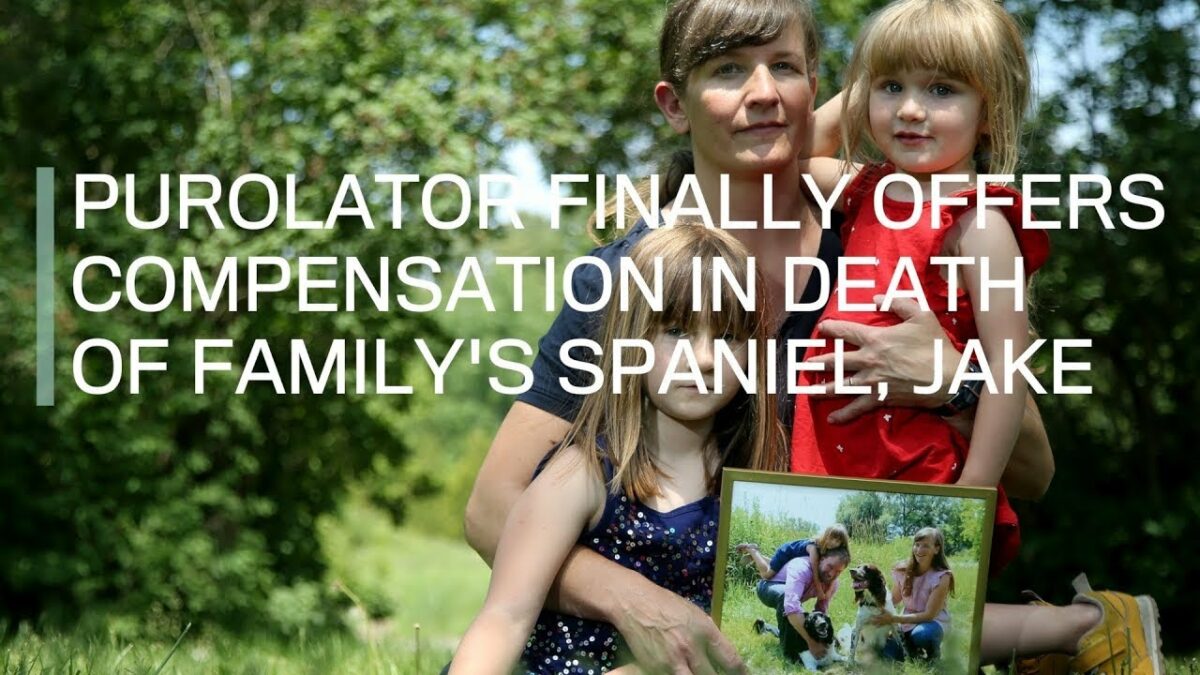 April 5 was a sad and distressing day for a family in a village outside of Spencerville, Ontario, who were abruptly forced to say goodbye to a family pet under unusual circumstances.

That morning, mom Samantha Hall, 44, and her two daughters, ages 7 and 3, were outside. Hall’s youngest son was inside, taking a nap.

At around 10:30 a.m., a deliveryman with Purolator drove up to the rural house, briefly spoke with Hall, was greeted by the family’s 12-year-old French Spaniel and was barked at by the family’s 2-year-old mixed-breed dog.

Hall didn’t see the man leave — but she heard what she described to the Ottawa Citizen as a “screeching” from the tires as he drove off. Her mind instantly flew to the family’s friendly but elderly dog, Jake, and she hoped he’d been out of the way.

“I thought to myself, ‘I hope Jake wasn’t near that van,'” she said.

“And then I heard whining.”

What she saw when she got to the driveway was heartbreaking. Jake was lying there, in obvious pain, crying.

Hall ran to the road, but the driver was already out of sight. She quickly woke up her son and loaded all her kids into the van to go to the vet. She struggled to get the 75-pound spaniel into the car — and as she recounted it later, she broke into tears.

“I had to lift my 75-pound dog, who was in such pain, he was — if he was any other dog, he would’ve bitten me,” she said. “He just had his mouth around my arm. And I struggled.”

Jake had a head wound and a possible broken leg, among other potential injuries, according to Hall. Pain meds alone wouldn’t be nearly enough, and Hall made the difficult decision to have him put down before noon.

“It’s heartbreaking, of course,” she told the Citizen. “My husband couldn’t be there. You just don’t expect it. My three children are there. It was a terrible day.”

Jake had been a part of the family’s lives for 10 years, and Hall’s daughters had grown up with him. Yet, in a matter of less than two hours, they went from spending a nice morning outdoors to saying an unexpected goodbye.

To make matters worse, Hall said it took some time to get Purolator to respond. And when they did, it was to deny involvement.

Hall called multiple times, and though she said the representatives she spoke with on the phone were sympathetic, nothing was really done.

A month later, on May 6, Hall received a letter from a company named ClaimsPro, who was working for Purolator’s insurer. In the letter, an adjuster addressed her claim that her “dog was said to have been run over by one of Purolator’s drivers and which eventually led to its death.”

“The Purolator driver cannot recollect striking your dog and our investigation has revealed no negligence with the driver’s actions,” the letter continued. “In view of these findings, we must regrettably deny your claim.”

“When the insurance man called and told me, I was absolutely flabbergasted,” Hall said. “It’s disappointing, it’s angering and I’m not sure I can even let it go.”

Purolator told her that the truck’s GPS clocked the vehicle leaving at 6 kilometers per hour (just under 4 miles per hour), a very cautious speed. Whoever is to blame for the dog’s passing, the facts remain the same: Jake is gone, and a family is in mourning.

When asked what she would like from the company, Hall said she wasn’t “out to make a bunch of money,” but would be content with them covering the vet bill ($600 in Canadien currency) and helping to pay for a new dog.

“I was up until 2 a.m. going over the whole experience and how I have been ignored for so long, and I have had to relive it a lot,” she said.

According to the Citizen, around two months after the incident, Purolator agreed to the family’s terms — and has offered to pay off the medical costs and send $1,000 to put toward the purchase of a new dog.

Of course, the money won’t replace Jake, and a new dog won’t either, but it could be a step in the right direction for the family to heal and move on from a sad chapter in their lives.