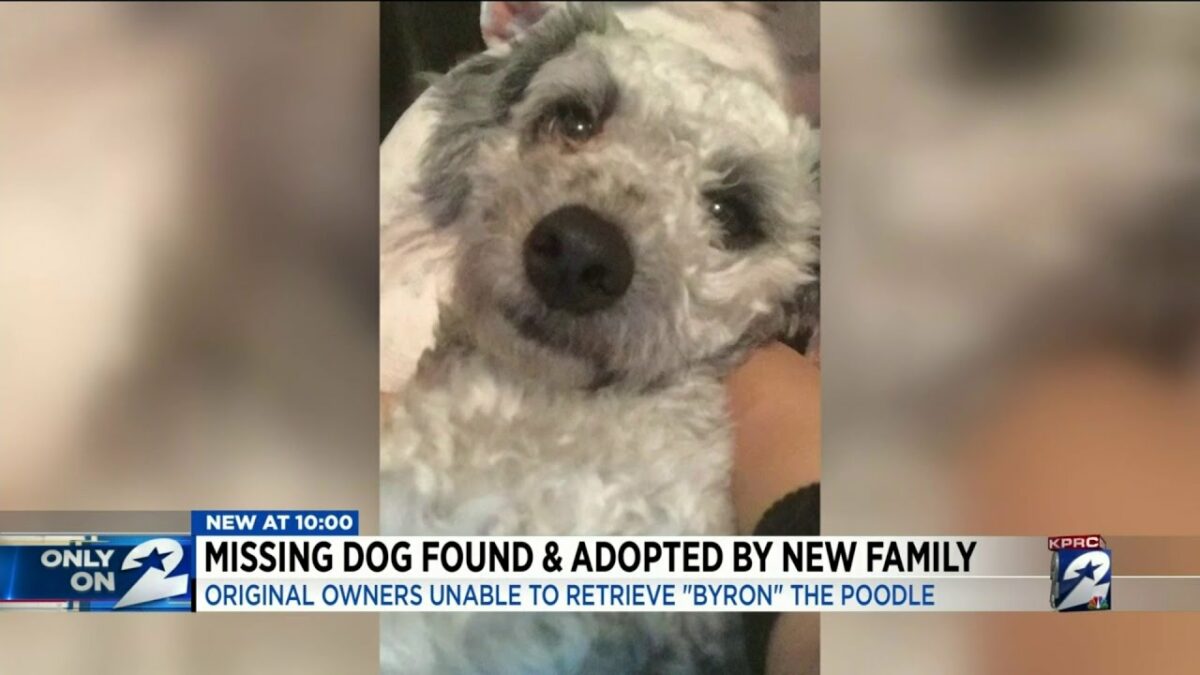 In most lost dog stories, dogs go missing and fail to be reunited with their former families due to a lack of identification. It’s harder to track down the owners of dogs without collars and ID tags or who are not microchipped, which is why there’s such a push for microchipping.

But what if you do everything you’re supposed to? What if your dog is chipped, you search everywhere and post signs and information about your lost dog, and somehow despite all your best efforts, your dog still gets adopted out to someone else?

That’s what the Marino sisters of Houston say they’re dealing with now.

In 2017, Brianna and Savannah got “Byron,” a Maltese-poodle cross (“Maltipoo”) from their uncle, who had the parents. They got to know their gray puppy from a very early age, and according to a post on the Facebook page “Help Us Bring Byron Home,” they originally got him as an emotional support animal since Savannah was going through cancer treatment and Brianna was taking it all very hard.

“He was basically my emotional support dog,” Brianna, 17, confirmed to KPRC-TV. “He slept with me every night.”

In 2019, on New Year’s Eve going into 2020, Byron disappeared from the sisters’ parents’ yard. The sisters wrote that as soon as he went missing, they marked him as missing through the microchip website and posted about him at the local veterinarian’s, Ring Neighborhood and Nextdoor.

“Unfortunately, we never located him or were alerted that he was found, but we never gave up hope and still searched for him every day,” their post continued.

“There were many sleepless nights where I would blame myself, and I would just cry,” Brianna said.

But in March, a dream of being reunited prompted Brianna to check Byron’s microchip listing. When she and Savannah, 25, checked it, he was no longer listed as belonging to them.

“It listed him as being owned by someone else now,” Savannah said. “We immediately started being like ‘What?'”

There was no way the information could be correct. As they looked into the mystery, a concerning tale began to unfold.

Apparently, in February 2020, Byron — renamed “Burt” — had been adopted out by The Poodle Rescue of Houston to another person. The rescue claims they had attempted to reach the owners listed on Byron’s microchip, but that they had been “unreachable” and so the rescue determined that he had been abandoned and offered him for adoption.

Savannah and Brianna say they were never contacted. They also said they’d kept the information on the chip updated and certainly would have remembered someone calling about their lost dog.

“There is no way we would have been unreachable,” Savannah said. “We even had a false positive that Byron was found. … We know our information was up to date. Like, if they had tried to reach out to us at all, we would have been there.”

“We were able to find out that the chip had been batch uploaded by the Poodle Rescue of Houston without our consent,” the post on their Facebook page states. “We got into contact with the rescue immediately to notify them this was our dog. To our dismay, the Poodle Rescue of Houston confirmed they sold him to someone else way back in February 2020! As restitution, they begged us to take their offer of a ‘new puppy’ in return.”

The sisters didn’t want a puppy — they wanted their dog back. Sadly, the rescue said that isn’t possible.

By now, “Burt” has been with his new family for near a year and a half, plenty of time for them to have formed a bond. They are still declining to return him.

The Marinos acknowledge that the new owner(s) have done nothing wrong in adopting a dog they thought was abandoned, but the sisters are still hoping to be reunited with their pet and have started a GoFundMe to try to raise legal fees to try to get Byron back.